Within the Rosalie River valley, close to the Atlantic coast of Dominica, there is a place where three rivers meet. These rivers are the Stuart’s, the Clarke’s (or locally Cacao) and the Brown’s. Together they form the Rosalie River, and the very river that most days between 11th June and 28th July a band of scientists and college students crossed operating on behalf of Operation Wallacea (OpWall) (Figure 1). 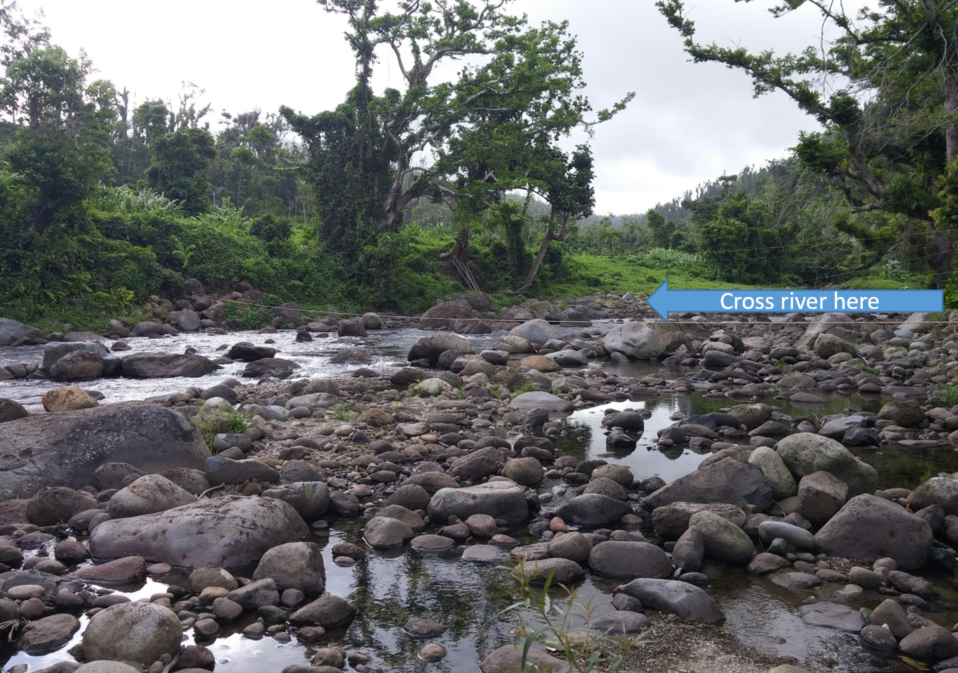 Participating students came from the US, Canada, Switzerland and the UK to undertake a variety of tropical ecology research in association with the Forestry, Wildlife and Parks Division of Dominica. The river crossing alone tells a tale, for the reason we waded through the Rosalie was Hurricane Maria, which hit on the 18th September 2017 and removed an entire concrete road bridge some 50m downstream and in several pieces. Not only did Maria remove this bridge, but it removed many across the island, and did its best to strip most of the trees of their branches and leaves (search Google for many such images).

Now many of these trees still stand, but it is difficult to discern what proportion is standing, dead, and covered in vines and epiphytes, and what proportion simply has stunted growth on severed limbs. All quite grim. Along with this environmental destruction came inevitable social impacts. Approximately 31 people lost their lives, and the same number remain missing and likely dead. Of those that survived Maria, some 15-20,000 left the island (21-27% of the populace) due to lost homes or livelihoods (around 90% of roofs were ripped off). This was the backdrop to this season’s expedition, OpWall’s fifth in the country since establishing the site in 2014. It is fair to say that by the time we arrived the country was in a far better state than could have been expected – at a glance it still looked lush and green, the main road network was functional, and key services (electricity, water) were mostly reconnected. People can be remarkably resilient, and so can ecosystems.

For my part, I led the freshwater research. I joined a team that comprised of marine biologists (from the Institute of Marine Research in Norway and Bangor University) bat and lizard ecologists (University of Calgary, Midwestern State University and the University of Exeter), entomologists (Natural History Museum), an ornithologist and a habitat scientist (Queen Mary University London). All in all, a potentially exciting opportunity for collaboration and comparison of the status of these different aspects prior to and post hurricane. In any given week groups of 6-8 students (aged 15-18) were rotated between each discipline, meaning that each student would only be exposed to each discipline once, and posing a challenge to carrying out the research. Each Wednesday the students would be taken on a volcanology tour of the island (it has nine that are dormant), whilst we staff tended to carry out extra fieldwork or consolidate the previous few days. Each Sunday, the students enjoyed a whale-watching tour to the marine site where they would spend their second week, signifying a changing of the guards, with a new school group arriving later in the day.

Dominica is 750km2 or just a little bigger than the Isle of Man (Figure 2). The last formed island in the Carribean, Dominica formed around 26 million years ago. Despite its size, its volcanic origins have given it an intimidating terrain, with many steep and high peaks. The highest of these peaks being Morne Diablotins at 1447m, 362m higher than Mount Snowdon. Combine this relief with a volcanic, often impermeable geology, and a tropical climate that includes frequent heavy downpours and one begins to understand why there are in excess of 300 rivers. It is also easy to imagine that these rivers rise and fall rapidly and can go from dribbles to torrents in a matter of hours. So how do you go about trying to carry out scientifically robust fieldwork under these conditions, in the company of enthusiastic but inexperienced students? 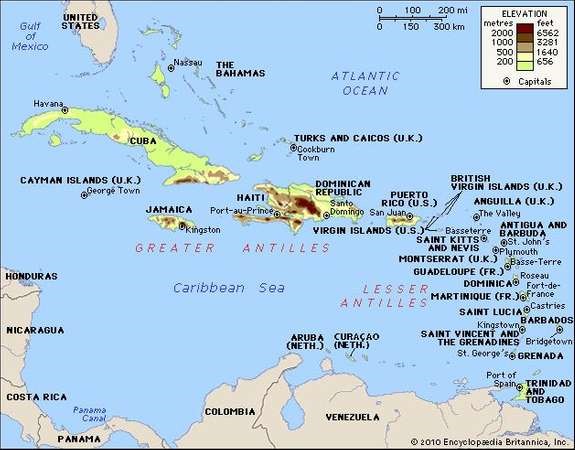 Figure 2 The West Indies (see if you can spot Dominica).

I had three questions to address through the field research; 1) What has been the impact of Hurricane Maria upon the freshwater ecosystems including their macroinvertebrate assemblages? 2) How does the habitat within the streams and adjacent to the streams (riparian) recover in the long term? 3) What is the rate of decomposition and what invertebrates perform this function? As OpWall has visited Dominica since 2014 there are some precedents regarding sites. However many previous sites were not particularly spread out and were not likely to capture a wide variety of river types and channel forms. Nevertheless, retaining some sites was necessary for long term monitoring and any consideration of pre-post Hurricane Maria. Ultimately, I targeted a core of 20 sites spread across five catchments (Rosalie, Roseau, Pagua, Belfast and Layou), with four sites in each catchments which were easily accessible, representing upper, middle and low sections of river. Each site was subject to a suite of habitat observations, physical and chemical measurements and a standardised three-minute invertebrate sample (Figure 3).

Figure 3 A) Some chap taking an invertebrate sample, B) Students taking observations

Dominica is a beautiful place (it after all referred to as the Nature Isle). Whilst Hurricane Maria tore it, hearing people like Jem, our host, tell how people came together to get through is heart-warming. So too is the general niceness of the people who are happy to lend a hand. For example, there was ‘Tokyo’, the neighbour who helped carry gasoline and supplies into camp, or Dawn and Andy who supplied us with lemon cake and fruit, or Mary, who frequently provided juice and watermelon to us, or her family who cut a new trail to camp when the first turned into a mud bath. It seems like there are always people willing to lend a hand and indeed the Dominican people are quite resilient.

Working in tropical environments is not easy. Images of palm trees and white sandy beaches that are stereotypical of the Caribbean should also be ignored. However, the biodiversity is quite extraordinary and in my opinion the rewards of working in this kind of environment outstrips the challenges such as no hot water, wading through rivers to get in and off site, excessive heat and humidity and no phone signal or internet access (99% of the time). Students who took part were exposed to environments and situations they had never before encountered, which will help prepare them for future endeavours (whether they appreciate it now or not). Even around the accommodation, we were bombarded with life (sometimes literally). My personal highlights were the freshwater crabs (Guinotia dentata), snail shell caddis (Helicopsychidae) and the frigate birds (Fregatidae) that hung in the sky (Figure 4). 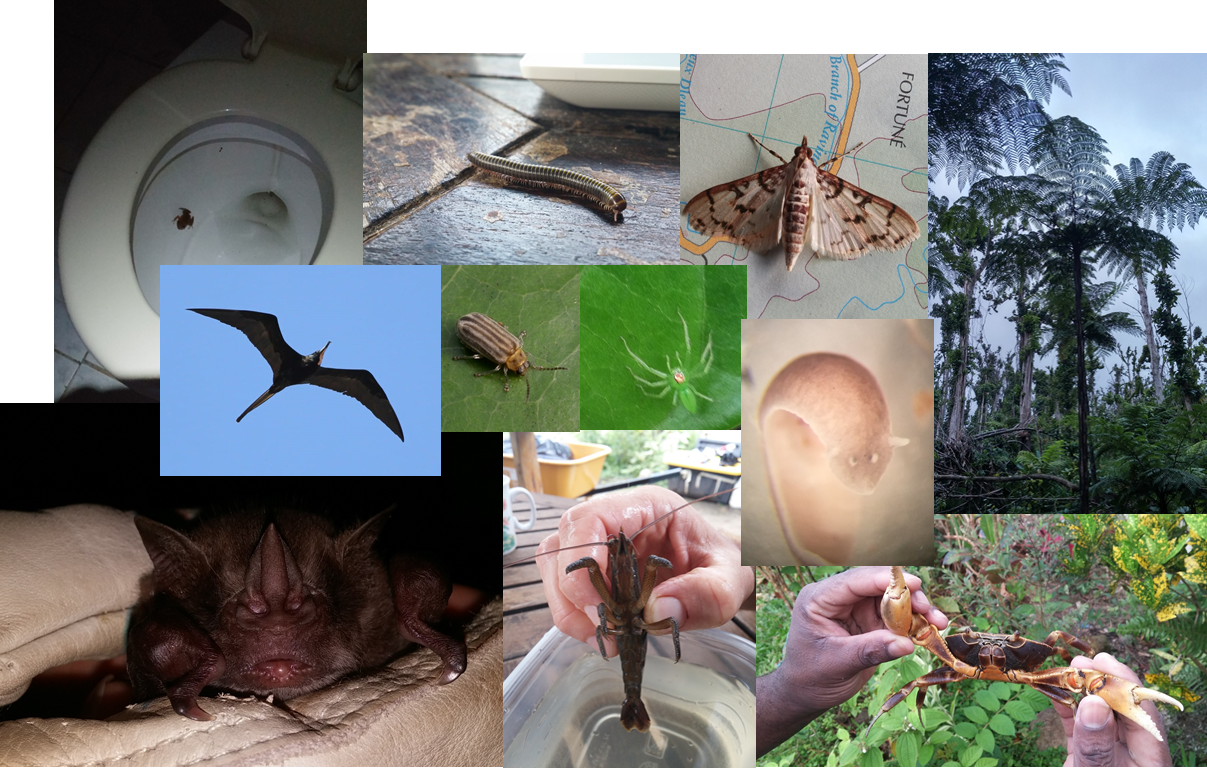 Now back at BSU, analysis is ongoing. In the office I have a number of samples that will need further laboratory inspection (invertebrates and leaf litter predominately), and in Wellow the muffle furnace is right now burning partially decomposed leaves to establish their ash component! However, preliminary analysis carried out during fieldwork indicates at least 90 different taxa (different invertebrates) have been recorded and in all likelihood some will be new records for Dominica with the potential for new species to science. Initial assessment of habitat associated observations indicate that canopy cover is limited adjacent to the stream (riparian cover), with approximately 15% of sampled trees dead, and between 40-50% supporting epiphytes and/or vines. The riparian zone (vegetated area immediately adjacent to the river) was dominated by herbaceous vegetation, which typically accounted for 65% of ground cover. These latter figures suggest the impact of the hurricane upon the riverine habitats; little shade could be found.

Over the coming 12 months (and hopefully beyond) there will be opportunities for student involvement in the current line of work, or to carry out investigations of their own. This may be carried out here at BSU with the samples so far collected, or with Operation Wallacea on future expeditions. Several peer-reviewed journal articles are expected and an annual report is made to the Dominican government. Anyone interested in getting involved in any way should contact me (i.thornhill@bathspa.ac.uk).