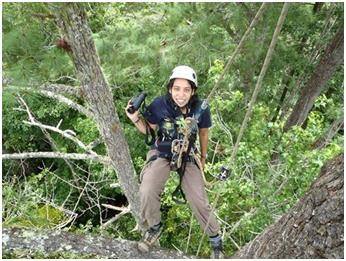 Claudia Guerrero is a Biology student from la Universidad Nacional Autonoma de Honduras. In 2010 she joined the program as a volunteer in Cusuco National Park in Honduras and worked with the different science and logistic teams in the different camps around the park.

In the summer of 2011, she was asked to work as co-manager of the Base Camp St. Thomas. Her responsibility and hard work was so valuable that in 2012 she was assigned to work in the Pacaya Samiria National Reserve in Peru. During the six weeks the program lasted she helped and learned from the Peruvian biologists and staff. In 2013 she was sent to Pacaya Samiria for nine weeks to work as an assistant to the country manager. Claudia was the first Honduran student who worked in the Peruvian Amazon and opened a path to more Hondurans to participate in our programs abroad.

“Being away from home for that long made me feel a little nervous, but once I was surrounded by the beauty of the rainforest and so many amazing people I felt welcome and comfortable. To be in the field and being able to apply what I learned in the university made me feel proud of the effort done through my years of study. To be able to say that I had been in the Peruvian Amazon for fifteen weeks is a dream come true.

This was an opportunity that only a few Hondurans have had. The experience that I acquired while working with Opwall from colleagues and the friends I have made has helped my personal and professional growth. During this time I learned that a lot of research and conservation effort need to be done in both countries. I would like to thank Opwall for the opportunity, confidence and support given during these five years. I would also like to thank Fabiola Robriguez from the Honduras Bird Team for introducing me to the magic of the rainforest and for inviting me to be part of this amazing group of people . Fortunately, Opwall has a new adventure awaiting for me and I can’t wait to for the 2015 summer. See you all in Mexico!”

Te extrañamos Claudita! Thank you for all your hard work over the last five years! 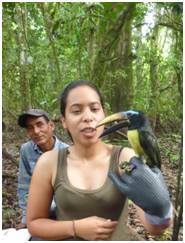