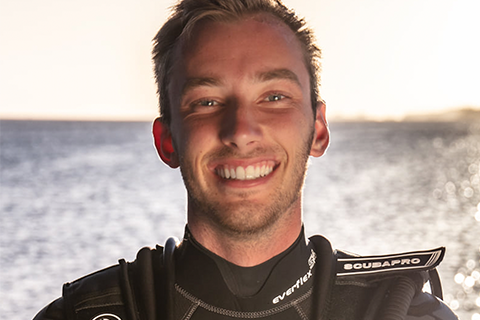 Alex grew up in Nottinghamshire and learned to SCUBA dive aged 14, he was hooked and knew he wanted a career that incorporated the ocean. He gained a BSc in Marine Biology from Newcastle University, then set off to become a PADI Divemaster. Once he was certified, he began assisting with the coral nursery on Koh Phi Phi Leh. Next, Alex went to work as an assistant aquaculture technician in Australia, before being offered his first position with Operation Wallacea. In 2019, Alex came to Utila (Honduras) for the summer as our reef ecology course leader.

After returning to Australia, he was voted the winner of the ‘Be the Difference’ competition at Utila Dive Centre (honoring the late PADI course director Andy Phillips). For this, he was brought back to Utila to train as a SCUBA Diving Instructor. After impressing his mentor’s during this course, he was invited to join the team of UDC as their Director of Conservation. Leading a monthly ecology and conservation internship, culminating in completing coral reef monitoring surveys. During this time, Alex also assisted with the management of the local coral nurseries, discovered the presence of Stony Coral Tissue Loss Disease (SCTLD) on Utila’s reefs, and coordinated groups of volunteers to monitor the turtle nesting beaches.

He was then offered a full-time position with Operation Wallacea as our Marine Research and Operations Officer, applying all he has learned for our global research projects.