Honduras – Life in the Clouds 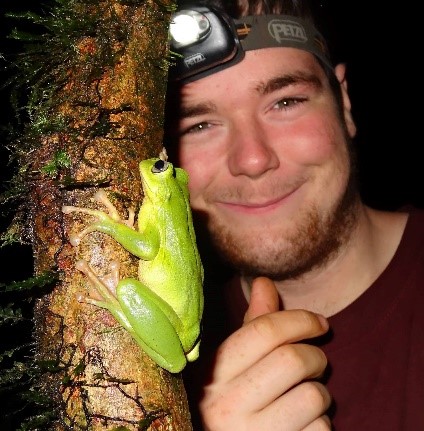 My first P.exquisita – the largest endemic amphibian in Cusuco

Written by and Photos Courtesy of Tom Brown

I initially went on expedition with Operation Wallacea in 2013 to collect my dissertation data for my University degree in Environmental Science. I chose Honduras as my destination, shamefully because I hadn’t heard of it, and after some quick internet research; I found its poor media image, remoteness, amazing biodiversity and unlikeliness as a tourist location made the trip even more attractive to me. The concept of researching in isolated mountainous cloud-forest surrounded by like-minded people was very appealing, and I craved for a simple and scientifically meaningful expedition. I found just that with Operation Wallacea. 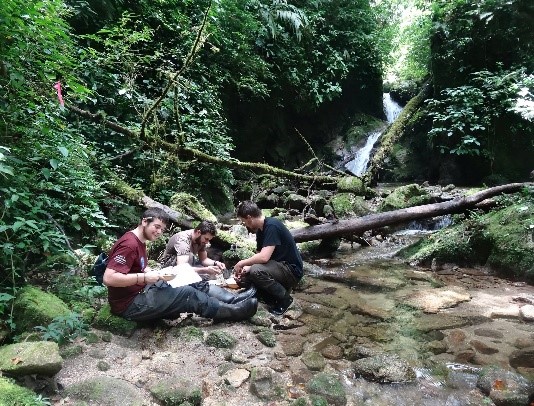 River surveys for tadpoles in the Cloud forest

My expeditions with Opwall are the closest I have been to fulfilling life-long ambitions to work scientifically in tropical environments, being involved in important research and promoting positive environmental change. The expedition provides great amounts of experience for those hoping to pursue an environmental/biological career and develop further. It is honestly a special experience knowing that you are working with often extremely rare and illusive species, which few other people increasingly won’t get the chance to see, let alone work closely with.  I think this privilege is reflected in the scientists and volunteers on site, and I feel continually inspired by the staff and varied research taking place. In addition, I love how multi-disciplinary the research is, combining like-minded conservationists from all areas to collect biodiversity data for the park. As a research assistant, there is opportunity to get involved with all aspects of this surveying, from mist-netting for birds & bats, plotting and surveying habitats, and trapping, catching and collecting data on reptiles & amphibians, mammals, inverts. There is always a team in need of assistance allowing you to broaden your knowledge and learn new skills. 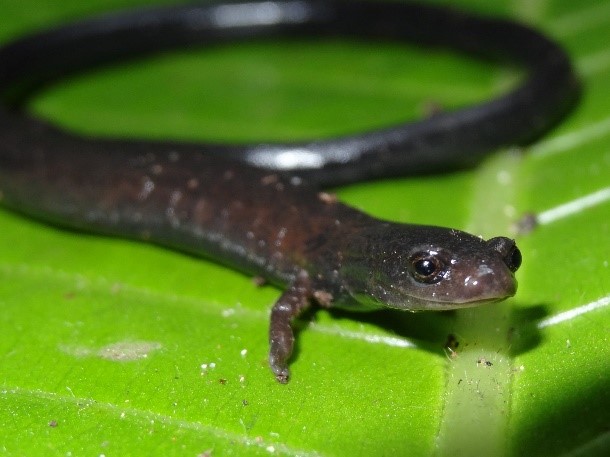 In my first season, I was extremely passionate about my dissertation on amphibian abundance and distribution, and loved the data collection aspect, i.e. walking transects and river sections at night, swabbing for Chytrid and collecting morphometric data on populations, generally gaining vital field experience. I was encouraged to learn about all the species I could encounter, which proved essential for my development. Finding each species posed a challenge and most encounters were after a lot of hard work and searching. After some weeks, surveying became a kind of quest for species I hadn’t seen, offering some of the most satisfying encounters in my life. In my first 6 weeks I managed to see 26/31 amphibian species in the park (a record), many of which are endemic or endangered. Due to my passion and the knowledge I developed, I am fortunate to have just spent my third ‘8 week’ season in Cusuco National Park, Honduras; 2nd season as a staff herpetologist, likely returning for a third. I have now seen all 31 amphibians, finally finding the final illusive salamander that had evaded me in countless hours of searching previously (in true irony finding 3 individuals in a night – O.tomasi). These are the moments that keep me motivated, encountering new species or successfully catching tricky individuals, gathering important data and making new observations on biodiversity as whole; and without doubt there is much more still to learn and discover. 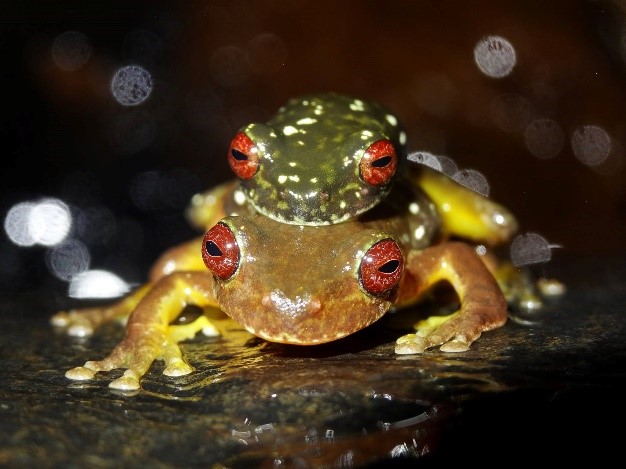 As a member of the ‘herp’ team, daily routine is well structured, conducting visual encounter surveys in the morning in search of diurnal species, taking the form of a tough 3km transect. Nightly surveys of forest or river segments are also performed to account for nocturnal species (Amphibians and reptiles/ 1km total). This is my favourite time to survey, there’s something eerily enchanting about being in the forest at night! During the day, besides meal-times and transects; time was often spent identifying species from various keys & literature, planning experiments or potential research ideas, sorting/organising equipment, analysing/entering data and generally networking and learning from many helpful and interesting scientific characters. Everybody knew what their roles were in camp, from scientists leading research, to younger volunteers/research assistants and dissertation students assisting it in an interactive manner. I find the general camp lifestyle is very beneficial part of the expedition; playing an active role in field research exposes you to the difficulties of gathering data and running experiments, and often ‘hiccups’ arise in this challenging location which is all part of the experience and learning curve. 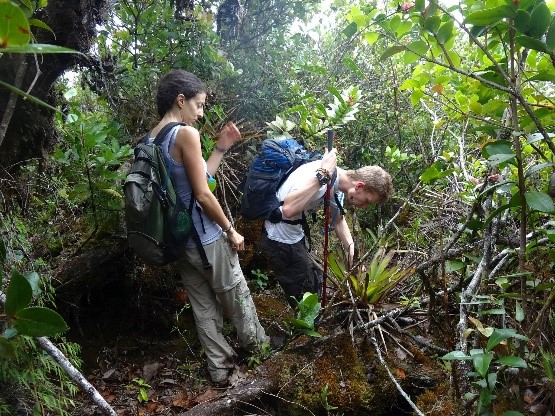 Finding herpetofauna in the neo-tropics is often notoriously difficult, you have challenging environments, endless suitable habitat to search intently and behavioural differences in ‘herps’ which make them harder to find as appose to in other locations. Cusuco National Park is incredibly diverse, but that diversity exists in relatively low abundance, making some species highly illusive, difficult to find and often endangered. Cusuco is ranked the 25th most irreplaceable site in the world for amphibian diversity and certainly lives up to its reputation, providing habitat for 9 endemic amphibians and over 16 species classified as endangered or critically endangered, 31 in total. It’s therefore an understatement to say the park is an excellent location for herpetologists to visit and survey; “Why else would I keep coming back?”

After a total of 6 months of living at sites across the park and walking daily transects in search of animals, each year I am still amazed to find many species I haven’t seen. After all my trips to Cusuco National Park, I return home amazed by the ecosystems I had explored, and the sheer diversity and wealth of organisms I had seen. I return feeling motivated and experienced, ready to pursue the environmental career I wanted. A feeling of accomplishment after “surviving the jungle!”

There’s no lying, the trip is physically and mentally challenging; in those instants I just look around and smile, take in the awe of the current environment, and it’s always a 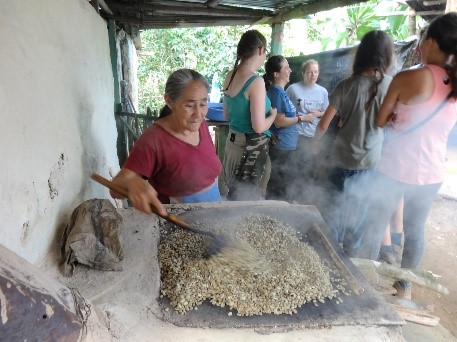 truly special place.  The relevance of the work and Opwall’s seasonal presence is evident; often on site you will be exposed to aspects of local culture when working with members of the community, which is fantastic. It is the opportunity to express your ‘contagious’ love for the wildlife and habitat, and in seeing this passion’ local opinions will be influenced. Immersing in local culture is also very eye-opening,it portrays the problems resident communities face andultimately why
environmental impact is high in the area. It is undeniably important to work collectively with local 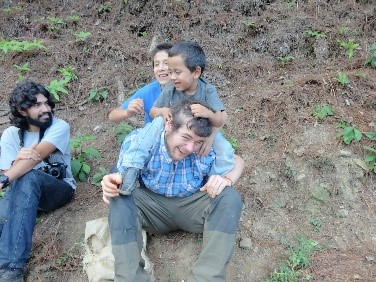 people, spreading knowledge about the importance of their native area. These are ultimately the people who influence the ecosystem and so it is vital they understand their impacts and why they should respect the forest and its inhabitants. It is with hope that Opwall works collectively with the local communities to promote more sustainable ‘environmentally friendly’ lifestyles, and despite anticipated on-going isolated difficulties enforcing full protection of the park; in the 11 years the project has run, I believe a positive impact has been made. 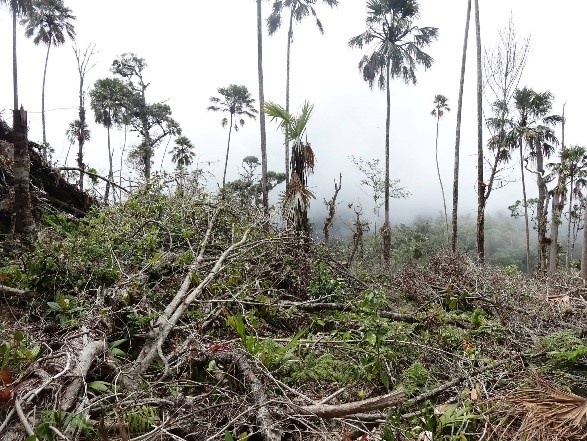 Unfortunately, devastating reminders of the importance of imminent research & conservation still occasionally arise, and vast amounts of deforestation can be found in ‘highly’ protected areas. The first-hand realisation to the scale of these threats was incredibly eye opening. The loss of habitat and subsequent species declines I observed will forever serve as a reminder to me about the relevance of the work that is still ongoing through Opwall and conservationists worldwide. It is essential to gather data and evidence explaining biologically the importance and value of the park. This in combination with working alongside and educating the local communities in sustainable and eco-friendly practices can really make a positive impact in the area.
The protection, understanding and inventorying of the park is therefore critical for this awesome ecosystems survival, and collectively with other academics through Operation Wallacea, you can get involved in that important work and research. Going on expedition with ‘Opwall’ was one of the best decisions I made during my student journey, and since graduating it has given me the foundation and foothold to be involved with further research. I gained excessive field experience for my age and interacted and still communicate with leading scientists I would otherwise not have met. The social and networking aspect of the expedition certainly opened many doors to me. Nevertheless, it did not come without hard-work, commitment and passion for studies and fieldwork. Undoubtedly if you excel and share your knowledge, hunger and motivation with others on site, you will find many opportunities as a student, graduate or volunteer. 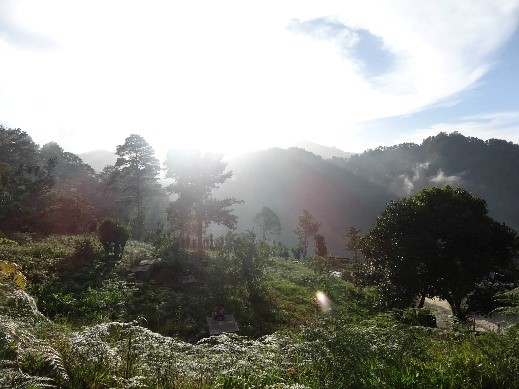 The view from the border of Cusuco – worth saving…