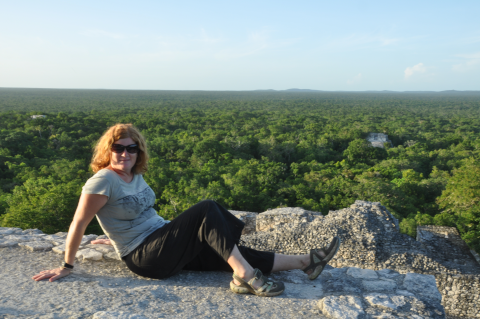 My role at Operation Wallacea is a bit different from most as I work full-time for the UK office, but I am based in Mexico year round. My first experience with Operation Wallacea was as a research assistant on the Indonesian expedition in 2000, followed by a return to Indonesia to collect data for my MSc thesis on Buton macaques awarded by the University of Liverpool. From Indonesia I travelled out to Mexico where I spent two wonderful years running around with wild spider monkeys Ateles geoffroyi yucatanensis), collecting data for my PhD (University of Liverpool) focused on the regulation of social relationships and biological markets theory of behavioural exchanges. After completing my PhD, I worked as the primate scientist, and then senior scientist for the Opwall expedition in Honduras, and also designed and helped coordinate the Opwall elephant behaviour project in South Africa while still living in Mexico and continuing my research on spider monkeys.

Since 2012, I have designed and coordinated projects in the Calakmul Biosphere Reserve (CBR) and the Mexican Caribbean Biosphere Reserve (MCBR). The project in CBR aims to monitor the impact of climate change on flora and fauna and use the results of long-term monitoring to inform management decisions in the reserve and develop sustainable livelihoods with indigenous communities. We provided the first standardized monitoring data for the reserve that was used to update the management plan, we have helped the reserve to obtain UNESCO mixed world heritage status, and we are currently liaising with reserves in Belize and Guatemala to move towards standardized biodiversity monitoring for the Selva Maya.

The project in MCBR is focussed on assessing the impact of tourism on the sea turtle population living in the seagrass ecosystem in Akumal Bay. Data were used to help develop the management plan for the bay when it became a protected area in 2017 and has since been used to assess the efficacy of the management plan in reducing stress related behaviour in the turtles and minimizing human impact on the seagrasses. We are currently investigating methods of sustainable management of seagrasses to maintain the turtle population now that the problems with chronic stress in the turtles caused by unregulated snorkel tours have been greatly improved.