Department of Botany Trinity College, The University of Dublin 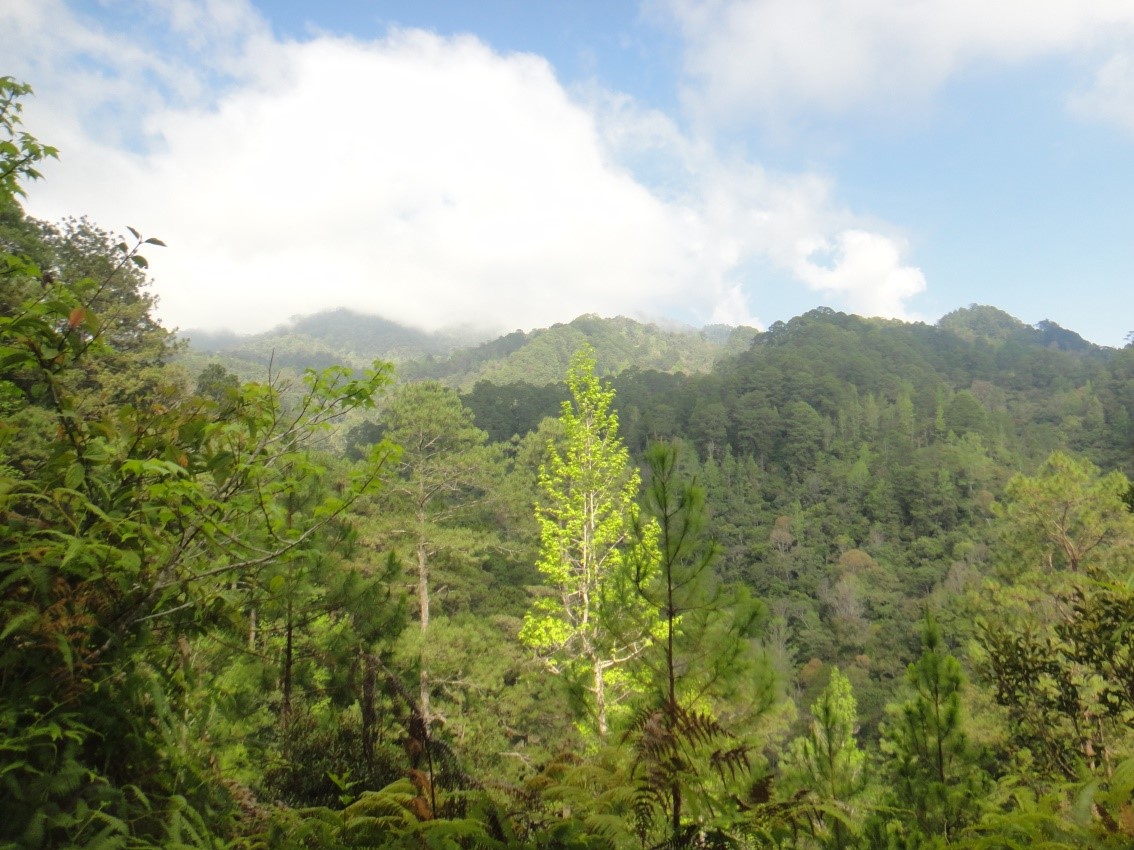 Young spring foliage of Sweet gum (Liquidambar), contrasting with the pines and other evergreens.

We made it! There and back again! There were sixteen of us, many of whom had never met until a couple of months ago: age range twenty-one to sixty-something; four nationalities; and varying widely in interests and experience. Our arrival was testing enough: the rain drummed down on our tents and tarpaulins all through the first night – and kept on falling, right through the next day. After that, we and the forest gradually dried out. We thrived through varying degrees of discomfort, coping with such challenges as where that leak might be coming from; what phylum of creature might be attempting to share your sleeping-quarters; how far it might be to that latrine, and whether you would find your way back in the dark … 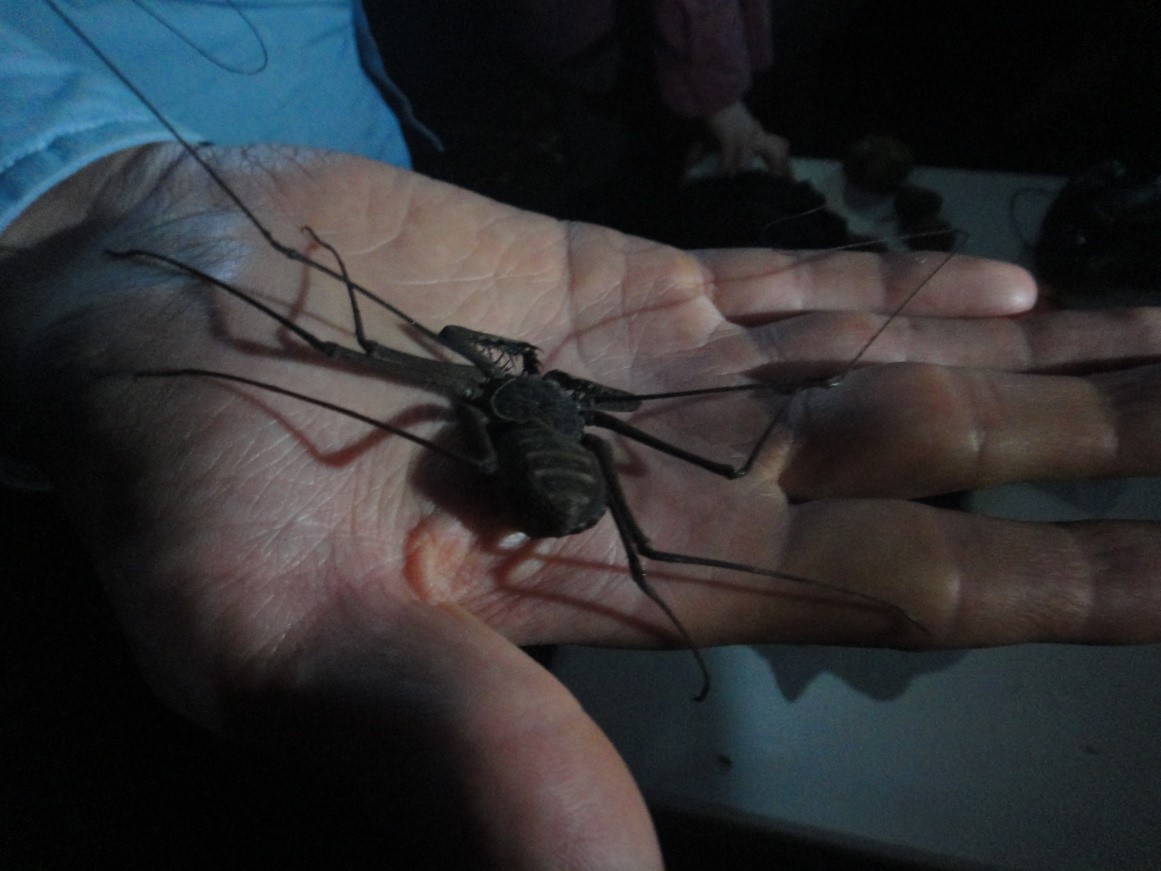 This was the first-ever botanical expedition to Cusuco National Park in the spring season. The timing was based on a double gamble: (i) that there would be a good range of species in flower, and (ii) that we would find plenty of species with flowers and/or fruits that had not been seen on previous expeditions (all in the period mid-June to mid-August).  We explored the forest in three separate areas of the Park, using three campsites in succession as our base. We made a full inventory of the forest vegetation, including a tree-by-tree inventory, in four new 20m x 20m plots. In five plots we made, for the first time, a detailed, quantitative record of the ground flora. We revisited a good number of previously-surveyed plots, tracking down hitherto unidentified trees in a fresh effort to find flowers or fruits. Sven Batke and the tree-climbing foursome scaled trees at a range of elevations. They recorded the epiphyte flora systematically, from the summit down to the base. They also collected specimens of the host tree – especially from trees where even the lowest branches were too high for the ground-based team to reach. 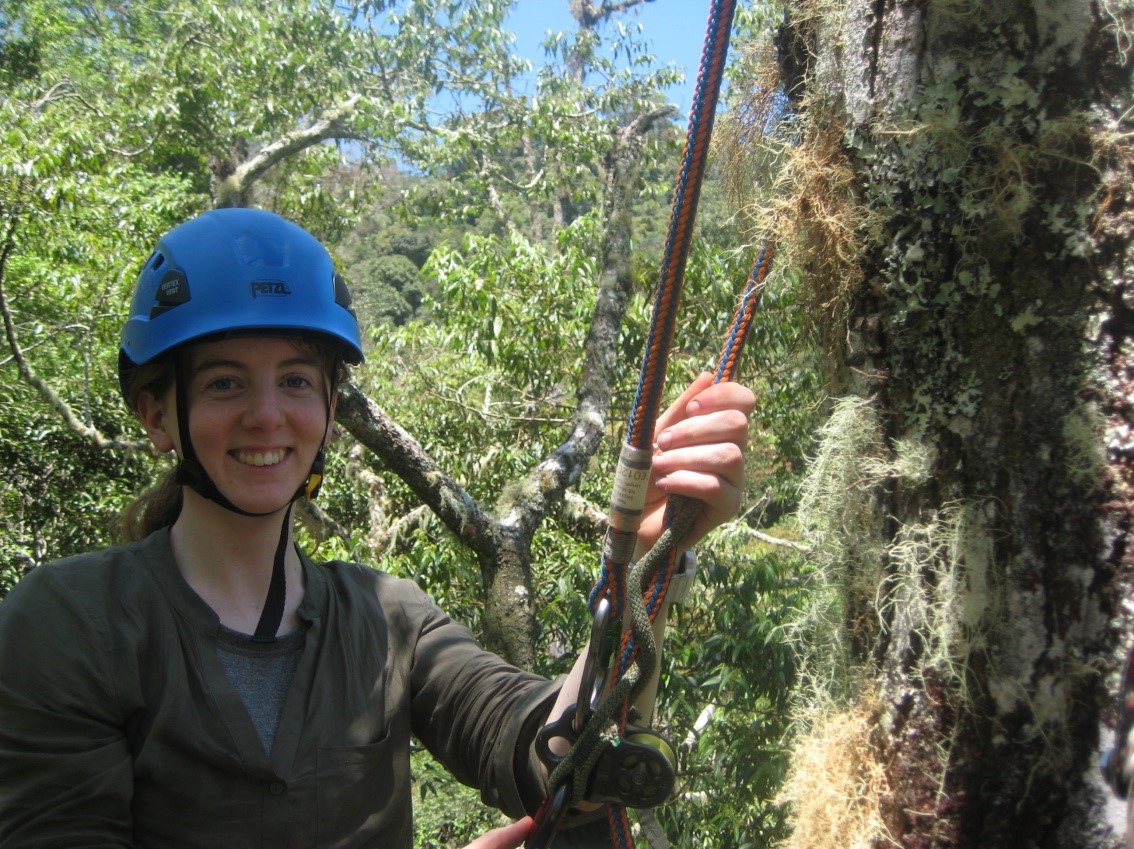 Alwynne McGeever of the climbing team, preparing for ascent

Both of our gambles paid off! We added a lot of species to the list for Cusuco, especially herbaceous plants and climbers – groups which had been under-surveyed to date. Even with trees and epiphytes – groups that Daniel and Sven respectively have focussed on on previous expeditions – we continued to find species that we had not encountered before, right down to the last day. We collected, for the first time, flowers and developing fruits of a tree known locally as ‘Ojo de pava’ (Turkey’s-eye), in the Ivy family (Araliaceae) – one of a difficult genus, and on the ‘target list’ for years. Of course, some items on our ‘target list’ continued to elude us. Some trees had lost their labels and could not be relocated. Others remained obstinately devoid of flowers or fruits – but at least we were able to collect specimens of their DNA. We did quite well with our most difficult group, the Lauraceae (Laurel family), finding a number of species with flowers or flower-buds for the first time. (We look forward eagerly to the verdict of the specialist in Missouri Botanical Garden). 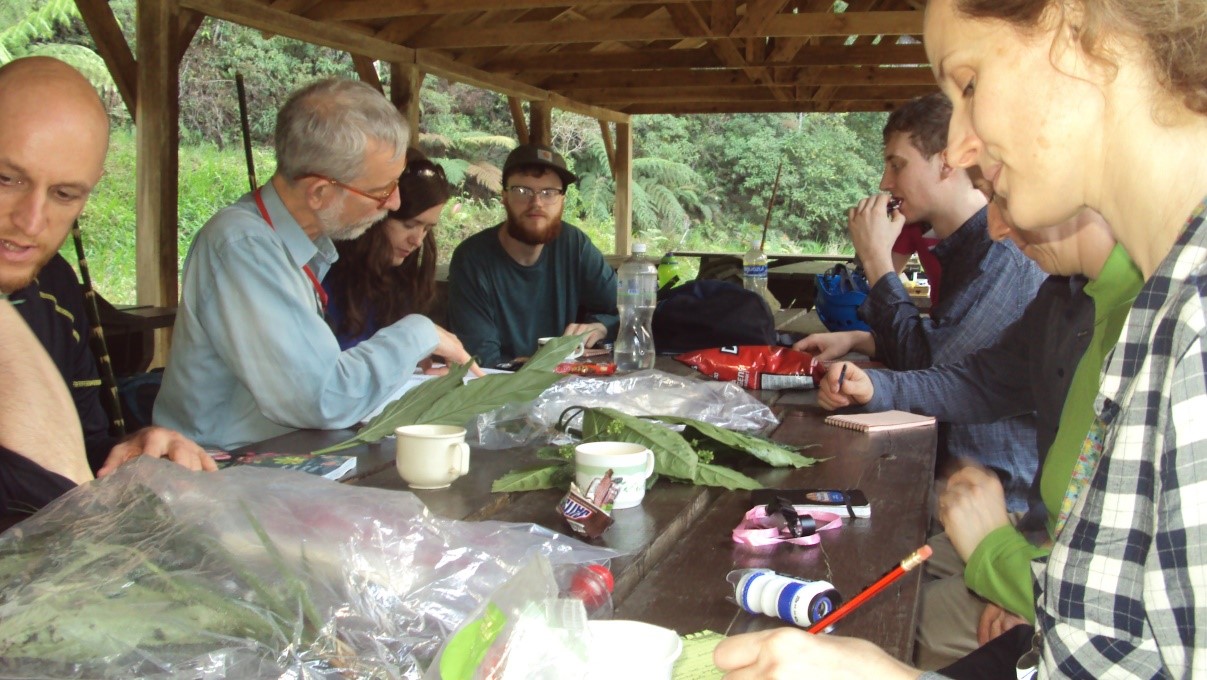 A plant identification session at Base Camp

Our core group of sixteen was greatly strengthened by our two wonderful guides, Pastor Cortes and Wilmer Lopez. Both combined skill, patience and good humour, and Pastor’s ability to spot and identify plants and animals at a distance was amazing. The group was further enlivened by the participation of Canadian secondary-school students, sharing in some arduous hikes through the forest, and in the excitement of – among other things – the prospect of finding species new to science. The interactions with other scientists – ornithologists, herpetologists and entomologists – added yet other dimensions. 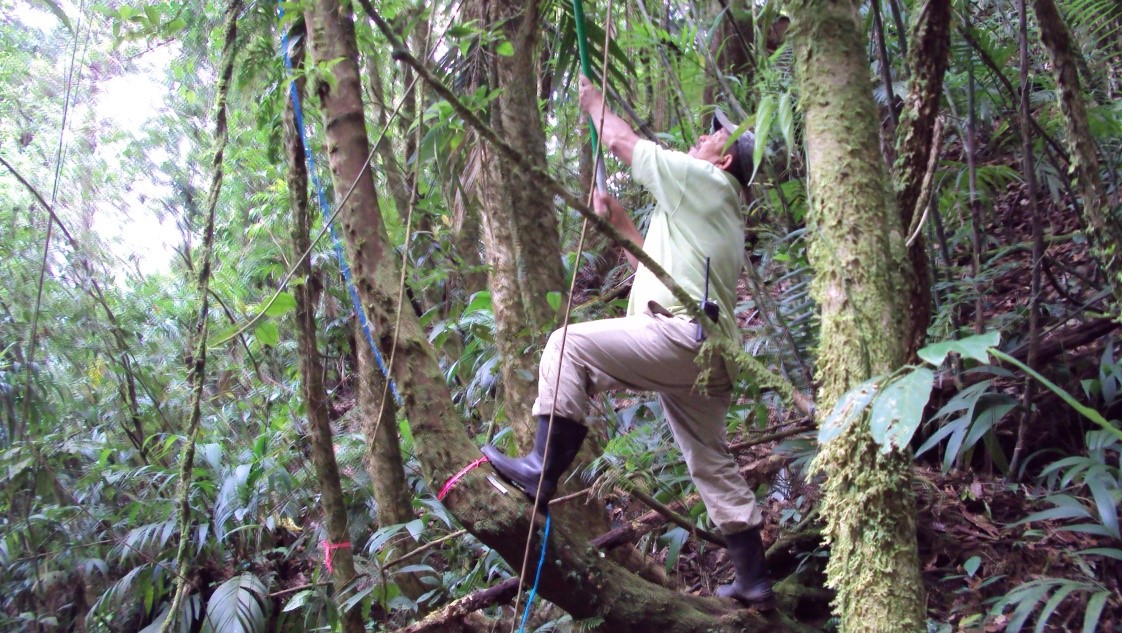 Pastor Cortes reaching for a sample with the extension pruners

As expected, life was not without its hazards. A coral snake crossed our path on one of our first long hikes. A viper had to be coaxed out of our survey plot on the last day of fieldwork. The terrain was as perilous as ever. Even the smoother trails were enlivened by the effects of erosion, with here and there a sheer drop at the very edge of the pathway. Other trails were more like tunnels, through tangled bamboo and lianes, with a sudden twist here, an unexpected rock-face there. Mark, a Canadian student, inadvertently put his foot in a wasp’s nest; he got 20-25 stings, which he bore with admirable stoicism. 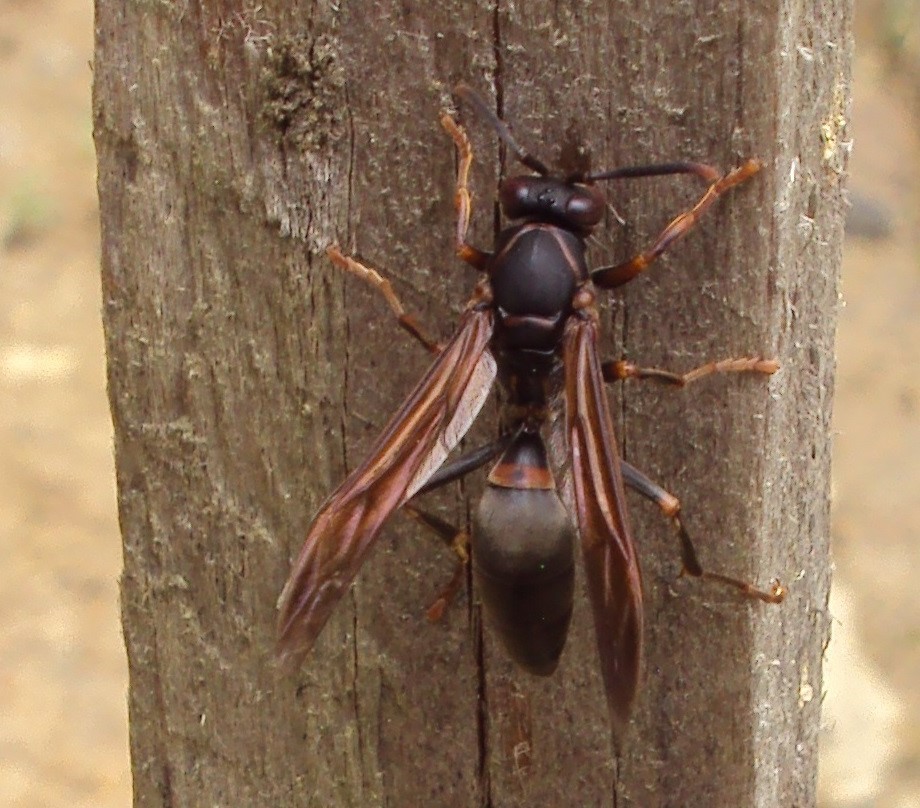 The most serious misadventure was when one of our group got a scratch on the eye from a bamboo leaf. After a sleepless night, the patient had to walk back to Base Camp (accompanied by the camp manager), and then be driven to a hospital in San Pedro Sula, two hours away. However, the patient was back at Base Camp the same night, and recovered over the next couple of days. 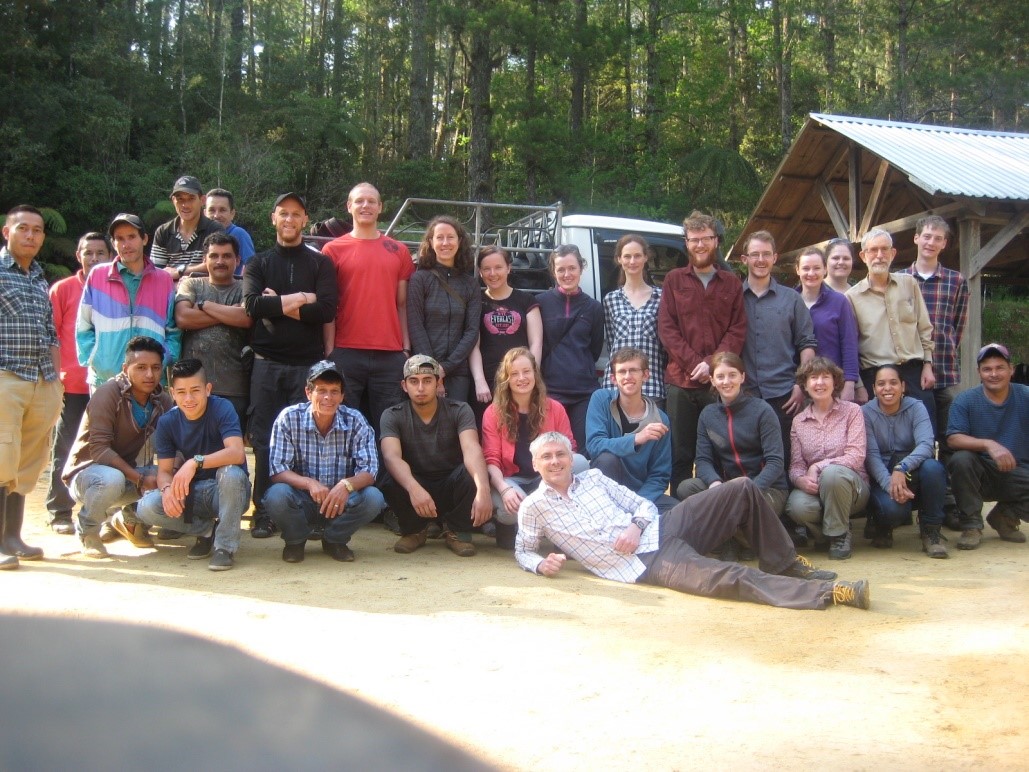 Of course, we depended on the backing of a spectrum of support staff: cooks, guides, porters and others, with as lynchpins our splendid camp managers Declan Crace and Claudia Guerrero, and with the special support and comfort of our medical officer Abby. Administratively, the trip went very smoothly. Only the business of obtaining a collecting permit for our specimens proved decidedly tiresome – albeit successful in the end.

Four of the group stayed on for a week in Tegucigalpa. We were very warmly received at the University herbarium, and got tremendous help from Lilian Ferrufino (the Acting Curator) and her assistants Olvin, Francia and German Sandoval. We sorted through all the specimens, and made a substantial number of identifications. There were a few that we could not identify even to family level – making these a priority for follow-up work.  Daniel gave two lectures (¡en Español!) to a mainly undergraduate audience, and Fernando Fernandez gave one. The talks were well received, and elicited a good range of questions. We also made a short field trip to the countryside near Tegucigalpa, visiting montane rain forest in the morning – not a patch on Cusuco, but well worth seeing – and dry forest in the afternoon. On the Thursday, 7th April, we finally received our collecting permit and the accompanying phytosanitary certificate. The following day, we posted off six boxfuls of specimens. The first three boxes arrived in Dublin on 21st April, and the last three in the first week of May.

To conclude: We got along well as a group, through rain and shine, not a grumble to be heard, and with remarkably few mishaps. It was a memorable experience, for every one of us. As yet it is too soon to evaluate what we achieved, in scientific terms: watch this space…

For financial and other assistance, we are very grateful to the Department of Botany, Trinity College Dublin; TCD Association & Trust; the Percy Sladen Memorial Fund; the National Botanic Gardens, Dublin; Fyfe’s Ltd.; and other friends and supporters.