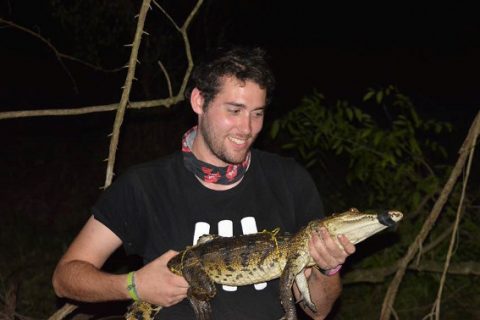 Joto is doing his PhD at the University of Salford on population genetics and ecology of the Morelet’s crocodile (Crocodylus moreletii) in Calakmul Biosphere Reserve (CBR), México. Due to its geologic characteristics, the soil in CBR has a limestone origin and water is a limiting resource, only existing in the form of temporary lakes, locally known as aguadas. These aguadas are sustained by retaining water provided by the annual precipitation gradient (which has been decreasing over the years), and constitute the only source of water to both the fauna and the human communities of the region during the dry season. Crocodylus moreletii represents a valuable model species on the assessment of impact of climate change and habitat alteration on semi-aquatic species in inland water bodies, such as aguadas. Even though our knowledge on this species has been increasing rapidly over the past two decades, little information is yet available on the species within the Selva Maya (Mayan Jungle), and so is imperative that we increase our understanding of the abundance, ecology, and ranging of C. moreletii’s in the reserve, especially because CBR may hold a genetically pure population of C. moreletii (without C. moreletii – C. acutus hybrids), and thereby of great importance to the conservation of the species, potentially representing one of the few locations in Mexico (only three are known so far) where non-hybrid populations still exist.