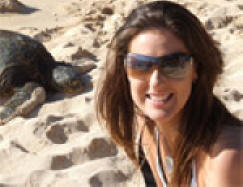 Sarah’s thesis was entitled “A Cross-Cultural Study into Local Ecological Knowledge”. For decades now, since the birth of industrialisation, human populations, particularly in the Western world, have become less and less reliant upon and connected with their local land. With this departure from the land has come a departure from traditional knowledge systems. Generations of accumulated observations are being lost or replaced by modern knowledge systems. With industrialisation now spreading to remote regions threatening traditional knowledge bases, this investigation looks at inter- and intra-cultural variation in knowledge, particularly in terms of economic development and resource dependence within communities in the UK, India and Indonesia. Significantly lower ecological knowledge levels were observed where economic development was high and resource dependence low. As level of resource dependence of a community decreased, the age at which ecological knowledge of individuals became saturated increased and rate of knowledge acquisition slowed. Progressive loss in the younger generations was observed at the industrialised sites. The teaching methods of formal education and the influence of television were found to be contributing to this pattern of loss. At the developing study sites, ecological knowledge was found to be gender-differentiated. This is a product of societal roles and daily activities, unlike in industrialised areas where lifestyle choices were the most important predictor of ecological knowledge. For instance, ecological knowledge was higher in individuals that grew up in rural areas, lived in rural areas during adulthood and made frequent visits to the countryside. Word-of-mouth and direct experience were found to be the most effective modes of knowledge transfer across all sites. The revealed patterns of knowledge loss contribute to our understanding of the future of ecological knowledge bases globally and action that may be taken to prevent further decline in the light of economic development.