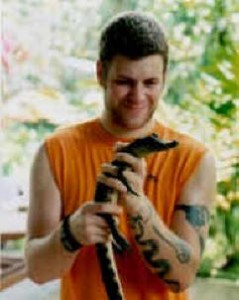 Mike collected data on the thermal ecology of lizards in the genus Anolis from the Cayos Cochinos and Bay Islands of Honduras. Since the 1960s, temperatures have risen 2.5°C in the Caribbean, and recent evidence has emerged that suggests global warming will affect forest-dwelling lizards that occur in the tropics much more dramatically than it will lizards in other regions of the world. Because three species of forest-dwelling Anolis are endemic to the Bay Islands (two out of the three occur on Utila), it is valuable to understand their thermal biology in order to predict the effects that global warming will have on their survival. Mike was supervised by Dr Ryan Calsbeek.