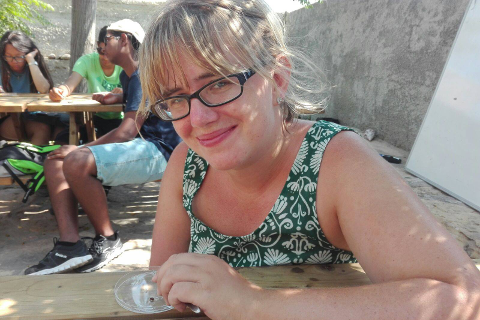 Helen graduated from the University of East Anglia in 2005 armed with a degree in Environmental Sciences. After a few years working in unrelated subjects, she remembered her passion and interest lay in conservation and she returned to UEA to top up her knowledge with a graduate diploma in Ecology. During her second run at UEA, she was presented with the chance to go to Egypt with Opwall in 2009. She went, and has been mildly obsessed with Opwall ever since and was lucky enough to join the full time office staff in January 2010 as part of the school sales team.

Now as senior schools manager, Helen is now responsible for overseeing the schools bookings for the UK, Europe (including Nordic), the Middle East and New Zealand. Her Opwall adventures have taken her to Egypt, Honduras, Madagascar, Greece and Mexico and she is always looking forward to the next one. Her favourite animal she has seen on expedition are green turtles and her turtle count is currently 11. In her free time Helen is a little creative and spends her free moments making things including (but not limited to) cakes, bags and small felt animals.