Greece – Update on the Greek Expeditions

For those lucky enough to be joining the Greek biodiversity survey expedition this next summer then there is some exciting news.  We have just finished the pre-expedition inspection and the preparations seem to be going well and what the students are going to experience is well beyond what we promised in the first place and probably the most luxurious project we run.

In the first week the students will not be staying in research centre accommodation in groups of 8, but in smaller groups of 3 in a hotel room in a beautiful small hotel about 100m from the research base on Samos.  The bay in which they are based has the research centre, the small family run hotel where the students will be based and a few local houses and small holdings, so it is as close to paradise as possible!  The hotel has a swimming pool and even a hot tub! All the meals will be in the main research centre.

The science options are even more extensive than originally envisaged and each of the students will experience the following: seagrass surveys, Underwater Visual Census surveys of fish communities, call back and camera trapping for jackals, spotlighting for chameleons, transect surveys for birds, mapping of sea grass beds with structure scanner of seafloor /GPS mounted on kayaks, invertebrate and bird surveys of remote islets and fish landing surveys.

The best bit though is where the students will be staying in their second week.  The original plan was to use a boat to transfer them down to Lipsi and Marathi (small island off Arki) but for them to stay in fairly basic field station accommodation.  However, Archipelagos have decided to run the project by chartering sail boats to take the whole team.  So the group will be travelling and sleeping in a yacht, accompanied by an Archipelagos boat.  The yachts that are being used are normally chartered at £600 – £1000 per day so the teams will have some real luxury and it will them to get to the various remote locations for the survey work. All the skippers of these boats are professional skippers and have worked for a long time with Archipelagos.  The boats will move together and spend the first few nights in Lipsi Bay and then the last couple of nights in Marathi Bay.   Breakfast will be on the boat, lunch will be a packed lunch provided by the boat and in the evenings some nights’ meals will be offered at a local restaurant and some nights in the Archipelagos’ base. 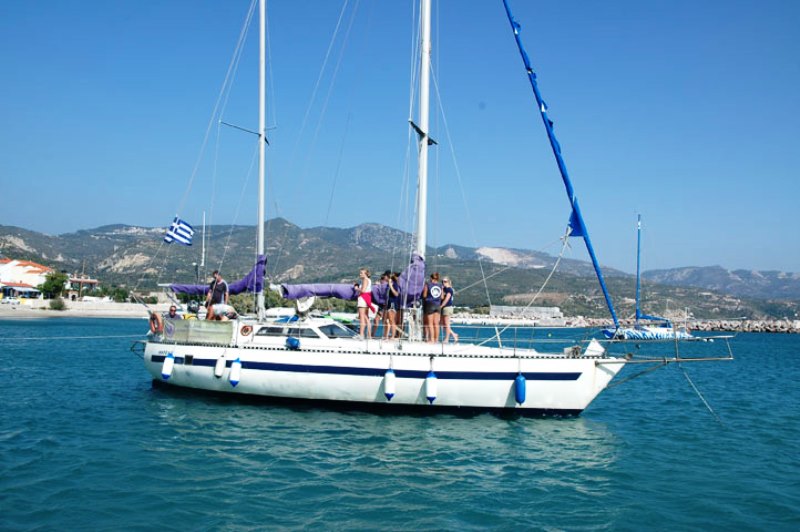