Public attitudes can hugely impact the success of conservation efforts. Our perceptions of a species can be greatly influenced by our culture and even by the way animals are portrayed in stories and there is evidence of bears playing a role in human culture from as far back as the 10th millennium BP. Overall bears seem to be shown in a more positive light, compared to other large, carnivores e.g. ‘the big bad wolf’. In the UK we grew up with characters such as Winnie the Pooh, Paddington Bear, and Rupert who are all as soft and adorable as the teddy bears we have as children (and sometimes as adults!). As we get slightly older we might encounter Iorek Byrnison, the armoured bear from Phillip Pullman’s ‘His Dark Materials’ trilogy, and while Iorek may be a little less cuddly, he is still most definitely a good guy.

Europe’s largest terrestrial carnivore was feared by pre-historic people and bears were given many alternative names as it was believed speaking the true name may have attracted the attention of this potentially dangerous creature. However, it was also highly respected and Finnish names for the bear refer to it as ‘The King of the Forest’ and in Celtic languages the bear was named ‘Matus’ or ‘the good one’, and Artio, the Celtic Goddess of forests is said to be a shape shifter that can take the form of a bear. There are even bears in our stars as in Greek mythology Callisto, the bear goddess, was originally a beautiful huntress and follower of the goddess Artemis. She had sworn to Artemis remain a virgin but drew the attention of Zeus, who is said to have seduced or tricked Callisto who then gives birth to their son Arcas. Upon finding out that Callisto broke her vow Artemis banished her, although allowing Arcas to remain. Hera, wife of Zeus was angry and jealous and transformed the vulnerable Callisto into a bear so the hunter would become the hunted. Arcas grew up to become a great hunter, and one day encountered Callisto in the forests. Callisto recognised her son and tried to approach, but Arcas did not recognise his mother in her bear form and raised his spear. Zeus saw what was happening and whisked Callisto and Arcas up into the sky to safety to form the constellations of Ursa major (the great bear) and Ursa minor (the little bear). 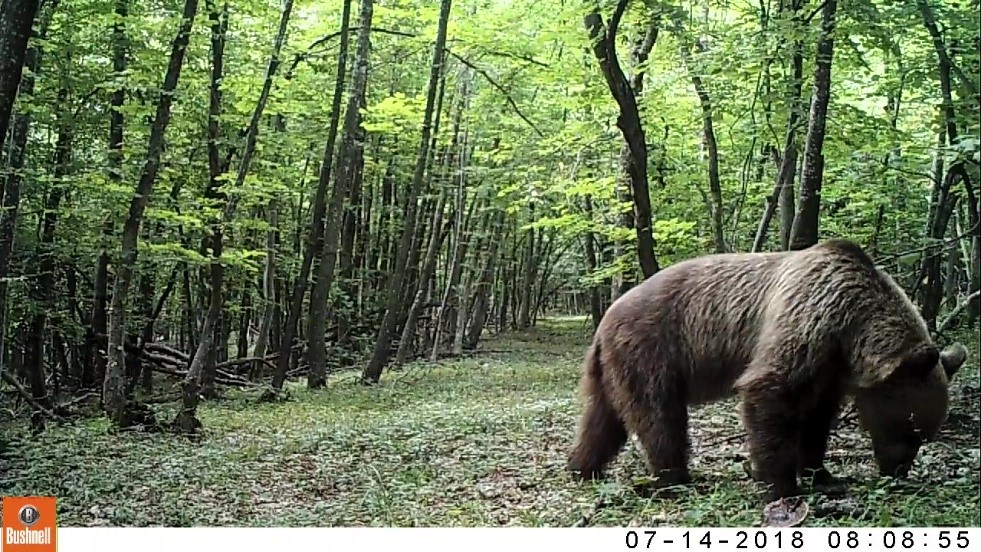 Despite having once been revered as gods and goddesses the brown bear has also been demonised and persecuted and is now extinct or endangered in many European countries with one of the greatest threats being human-caused mortality, through legal hunting, poaching and conflict over livestock.

Urban attitudes to carnivores are often more positive than those of the rural populations living alongside those carnivores. While positive portrayals are good we do need to recognise that bears are not fluffy and cuddly and that they need to be respected as wild animals. It is hoped the European range of the bear will once again expand but the amount of remaining wilderness is still being reduced. It would be a massive cultural as well conservation loss if the brown bear was to go extinct in Europe, however, if we want large carnivores to remain we will have to both protect remaining habitat and learn to live alongside them once again.