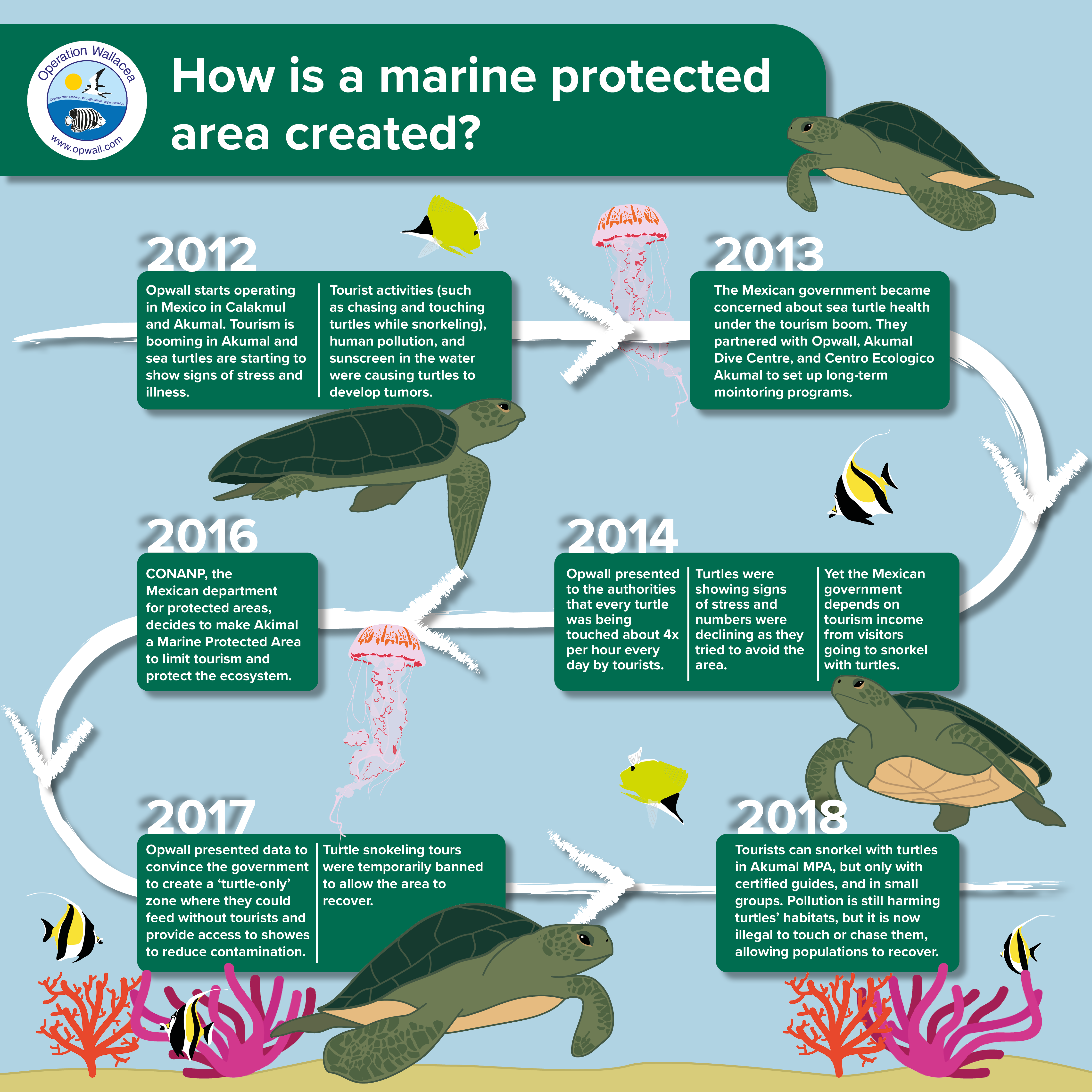 Micro-podcast: If you would rather listen to the summary, check out episodes of our micro-podcast, Science Snacks, on Spotify, Apple Podcasts, and Google Podcasts.

This study investigated the impact of snorkel tours on the behaviour and health of a population of adolescent green turtles (Chelonius mydas) living in the seagrass habitat of Akumal Bay, Mexico. Multiple studies of snorkel-based tourism with dolphins or sea turtles have shown that when the number of tourists gets too high, or the tourists attempt to touch them, the dolphins and turtles issue evasive responses to attempt to escape from the tourist. If animals are in a constant state of fight or flight to evade tourists, then this chronic stress is expected to impact on their health. Since 2014 the turtles in Akumal Bay have developed tumours associated with the Fibropapillomatosis (FP) virus that is present in nitrogen loaded warm shallow waters such as seagrass habitats in touristic areas. When turtles experience chronic stress, their immune system cannot fight off the virus resulting in tumour development. Tourism has steadily increased in Akumal Bay since 2008 resulting in a decline in the seagrass habitat and a decline in the health of the turtles. The researchers of this paper investigated the impact of tourist presence and tourist behaviour on rates of evasive responses in the turtles. Results indicated that tourists were breaking federal law and touching the turtles on average 3 times per hour resulting in high rates of evasive responses in the turtles! Results of the study were used to help turn Akumal into a protected area in 2017. Snorkel tours with turtles are now strictly regulated, with tourists only permitted to snorkel with turtles when accompanied by a licensed guide and the inclusion of “turtle only” zones where turtles can escape from tourists if needed. Since then, rates of inappropriate tourist behaviour and corresponding evasive responses in turtles has sharply diminished. The impacts of pollution from nearby communities and tourist activities on the sea grass is still under investigation.

Read the full paper in Spanish

If you would rather listen to the summary, check out episodes of our micro-podcast, Science Snacks, on Spotify, Apple Podcasts, and Google Podcasts.

Opwall’s Science Snacks is where we share our conservation biology knowledge with you, in the form of tasty little snacks! You’ll find summaries of research paper and micro-podcasts about our most exciting tid-bits.