Sometimes the numbers just don’t add up, and the sheer volume of people who rely on Indonesia’s coral reefs for their livelihood and food security is the perfect example. But how exactly do you go about moving families already living close to the poverty line away from an activity that has been part of their culture for generations? Throw in the fact that Indonesia is now home to more than a quarter of a billion people and the challenge grows still further. Marine protected areas provide a valuable framework to support more structured management, while community education programmes and efforts to develop ownership offer a mechanism to minimise negative impacts as much as possible. However, none of these approaches can account for the fact that, in most locations, no suitable alternatives exist to allow stakeholders to exit the fishery, whether to replace lost income, food, or both. 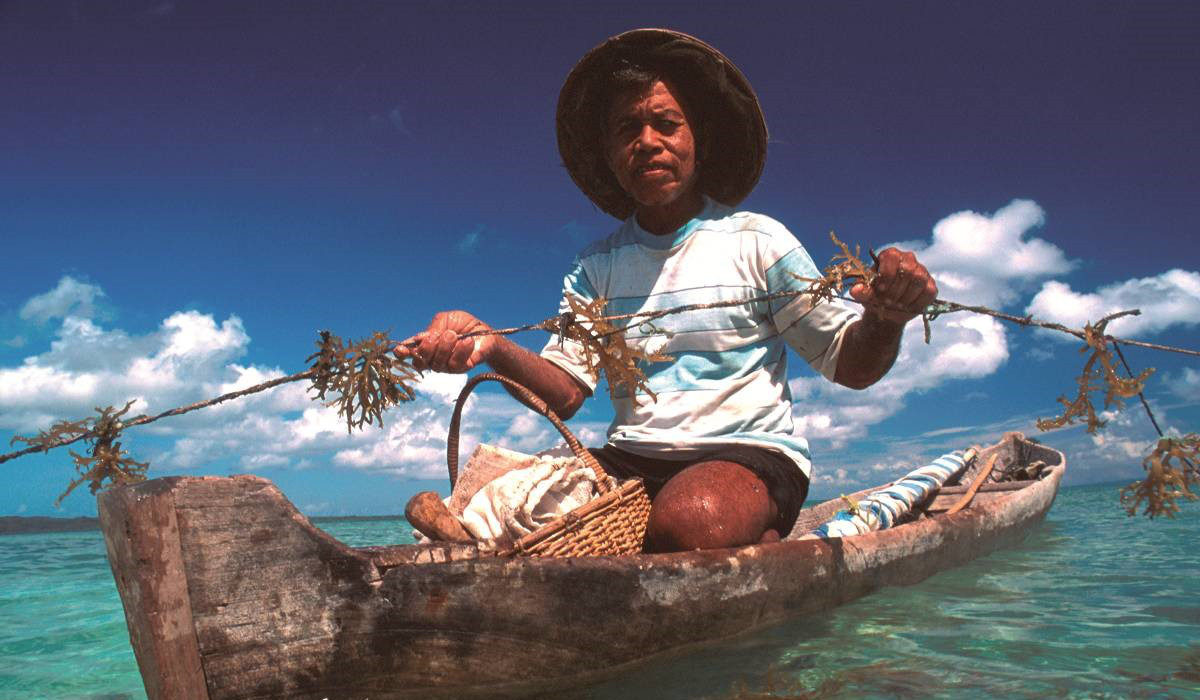 Herein lays the Holy Grail for coral reef managers throughout Southeast Asia: if people aren’t fishing, what can they eat and how will they earn? Until that challenge can be solved, it is unrealistic for scientists to expect poor Indonesian fishers to sacrifice their families’ welfare to save coral reefs simply through a sense of conscience for the natural world. But sometimes opportunity comes in the unlikeliest forms, and the answer could have been under our noses the whole time.

If you visit many small coastal communities in Indonesia, you are likely to have to navigate a maze of rope zig-zagging the ocean’s surface on your way in to shore. Once on land you will then find it hard not to notice the piles of drying seaweed outside many of the houses. This is the first stage of a global industry worth almost $1 billion per year that supplies hydrocolloids such as agar and carrageenan to sectors including human food, animal food, cosmetics and pharmaceuticals. However, despite the lucrative nature of the industry, profits are highly skewed towards the companies extracting active ingredients from the raw seaweed, and only a small percentage trickles down, first to middlemen, and finally to the seaweed farmers themselves. In fact, these farmers often receive only $0.50 per kg of dried seaweed, and you would be surprised just how much seaweed adds up to only one kg once it’s been dried! These inequalities in the existing supply chain leaves seaweed farmers as one of the most impoverished groups in the community, relying on fishing to supplement their income, and thus preventing seaweed farming from becoming a suitable alternative income stream.

However, seaweed farming possesses many requirements of an ideal alternative income stream. Indonesia is already the world’s largest producer of farmed seaweed, meaning it is already an accepted and widespread livelihood, while its close contact with the sea maintains stakeholders’ cultural association with the ocean. It is also a priority of Indonesia’s new president, as over 80% of seaweed farmed in Indonesia is exported raw to the Philippines for value added processing, meaning Indonesia is currently missing out on the lion’s share of this billion dollar industry.

Taking all these positives into consideration, Operation Wallacea scientists have spent the past decade working on a holistic reef fisheries management model. Supported by community education and improved ownership via registration of fishing boats, the centrepiece of this project is the re-defining of the existing supply chain in the global seaweed industry to move focus away from centralised processing plants and towards value adding on a local scale, allowing the full benefits to be felt in the communities themselves. 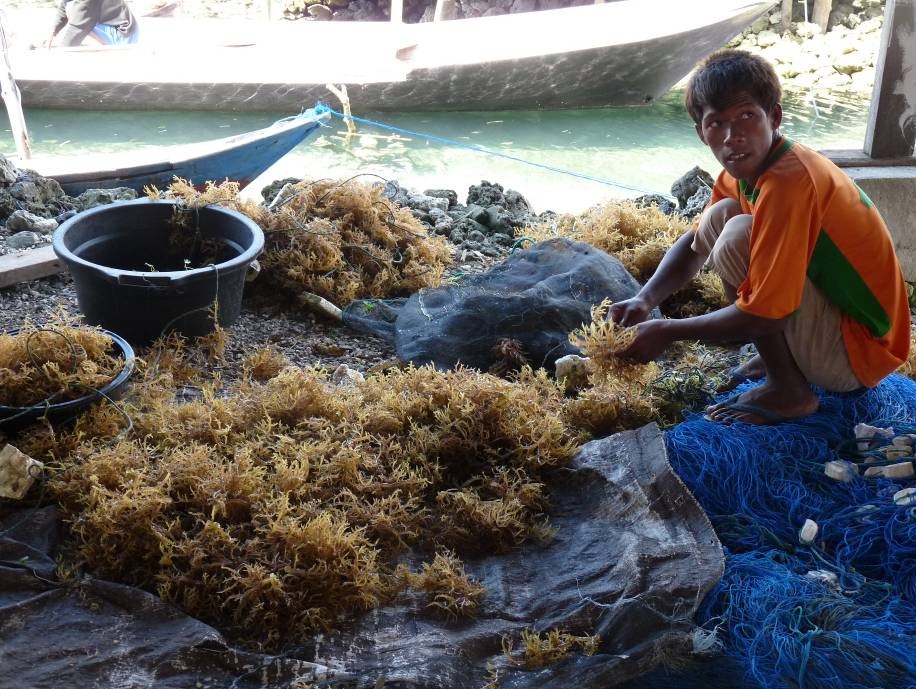 After shipping a tonne of seaweed from the Wakatobi Marine National Park to the UK, independent consultancy firm Oaklea Ltd set to work developing a novel method of producing valuable carrageenan, with the remit of environmental sustainability and suitability for implementation in local Indonesian communities. After months of experimentation, they produced a method that was simple enough to be completed in a household kitchen using only easily obtainable chemicals. However, replacing lost income by moving families out of the fishery is only half of the battle, and all would be for nothing if local food security cannot be guaranteed by replacing lost catches with alternative food sources. This was achieved by a simple tweak to the process, where modifying the required chemicals replaced sulphurous effluent with a nutrient rich by product perfect for increasing farm yields from Indonesian island soils. By operating the process in privately-owned small localised plants, seaweed farmers will receive factory-gate rather than farm gate prices (roughly doubling their income), as well as dividends via a shareholding scheme in return for their exit from the fishery. Remaining fishers will own a valuable license to fish from a closed fishery, providing them with the incentive to fish sustainably for future generations. And finally, local farmers currently working on nutrient poor soil will receive free fertiliser to increase crop yields and replace the food lost by reducing fishing pressure.

After completing laboratory testing and designing a business model to implement the approach in Indonesian communities, the project has now moved back to Indonesia for the final testing phase. Operation Wallacea have recently agreed a new partnership with IT Del, one of Indonesia’s top universities established to provide higher educational opportunities to gifted Indonesian students from impoverished backgrounds, and focusing on key priorities for Indonesia’s economic and environmental development. With funding partners including Microsoft and NASA, IT Del have pledged the funding and technical expertise to construct and operate a pilot plant on the shores of Sumatra, Indonesia. This pilot plant will fine tune the process at the industrial scale, finalise the economic business model, and ensure rigorous environmental targets are met, before becoming a long term research and development facility to allow IT Del scientists and students to continue to improve the way seaweed farming and processing is carried out in Indonesia. This pilot plant is planned to be operational in spring 2016, and ultimately It Del and Operation Wallacea envisage a network of full scale plants around Indonesia, revolutionising the economics of the nation’s seaweed farming and finally starting to address the overfishing crisis. Watch this space!