Written by and Photos Courtesy of Catherine Yates – to find Catherines own blog visit: catswonderings

Catherine spent 6 weeks with Opwall doing her dissertation on primates and has very kindly given us blog posts that we will publish as part of a mini-series with this post being the final part! 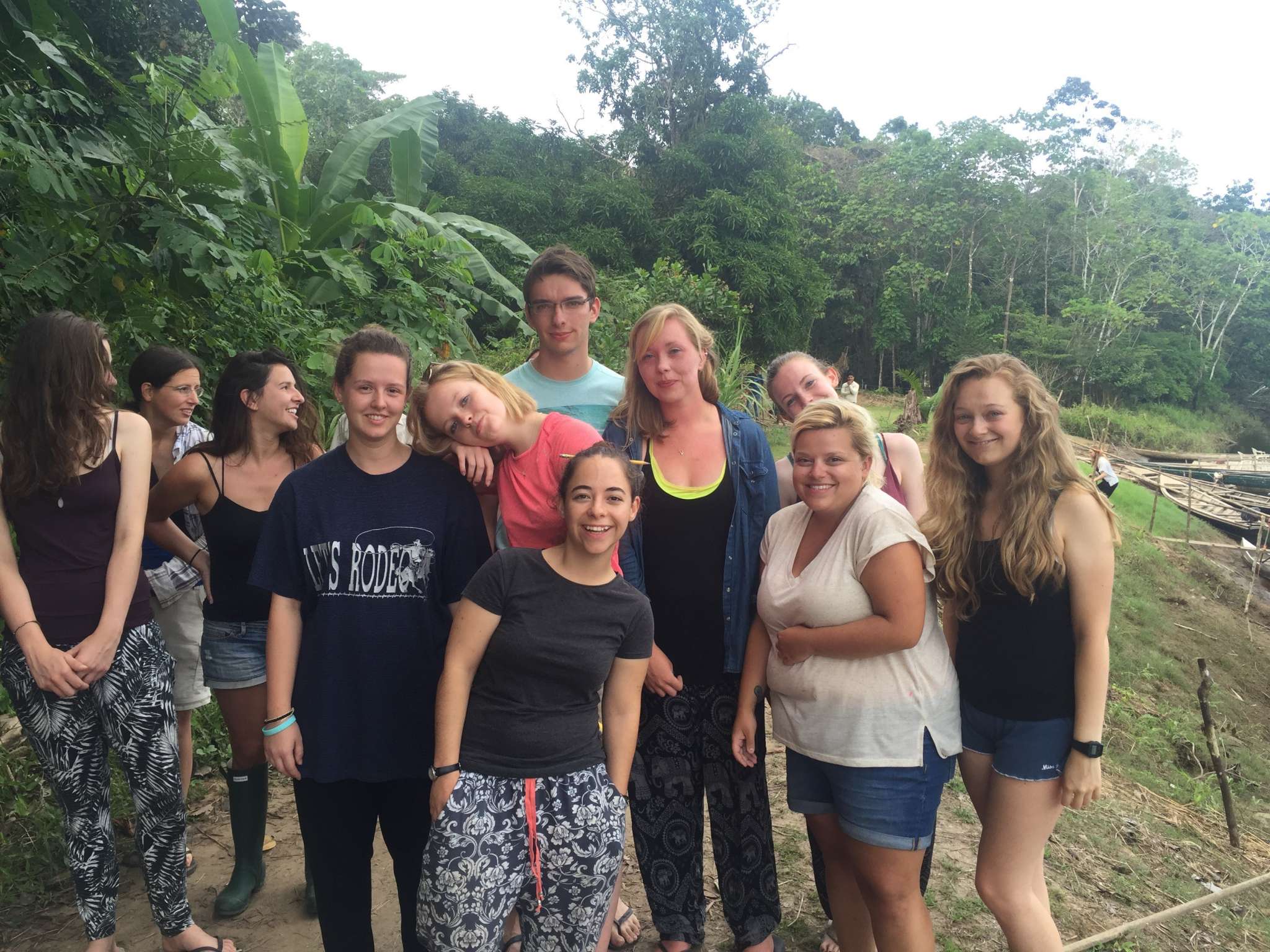 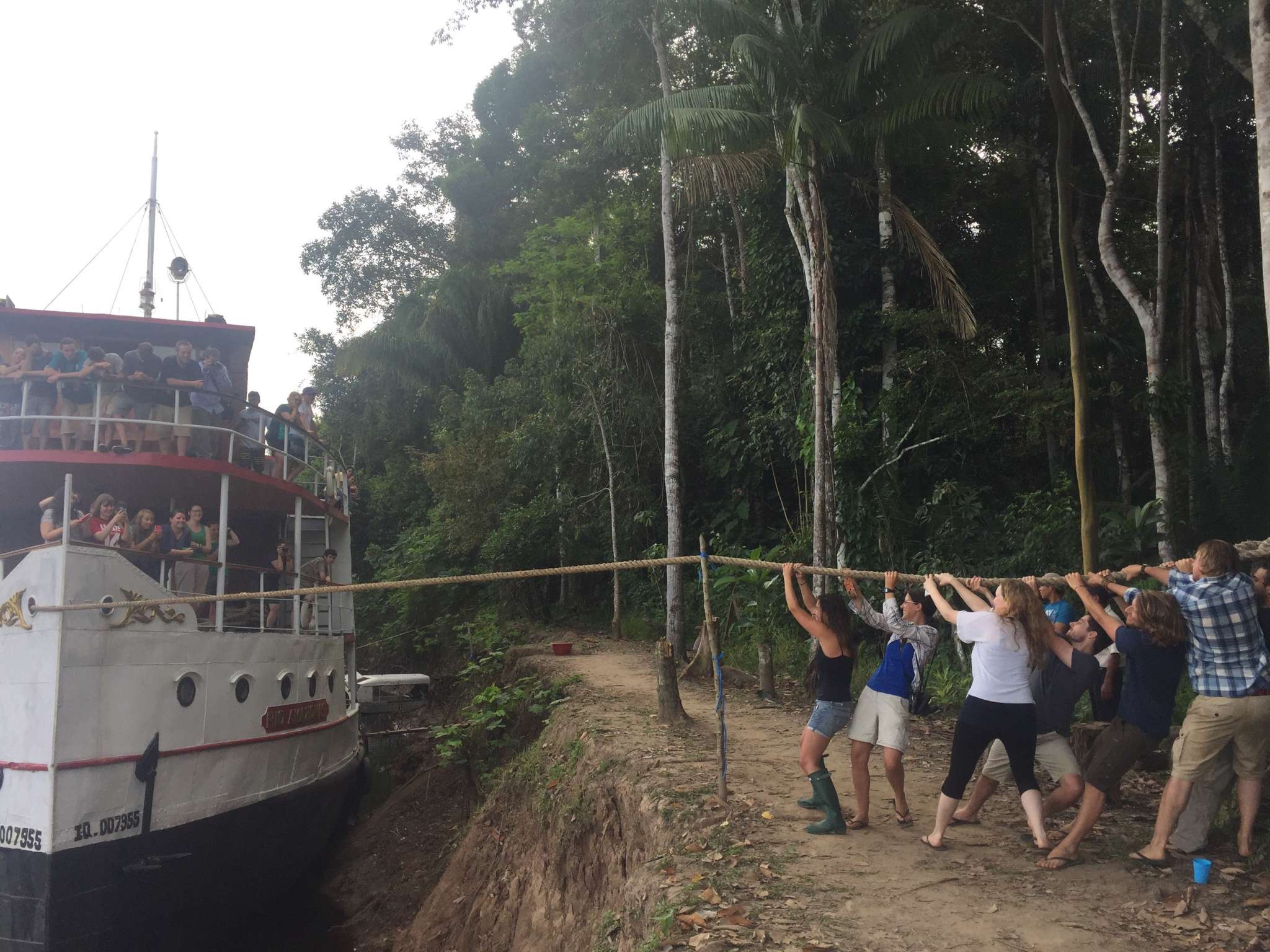 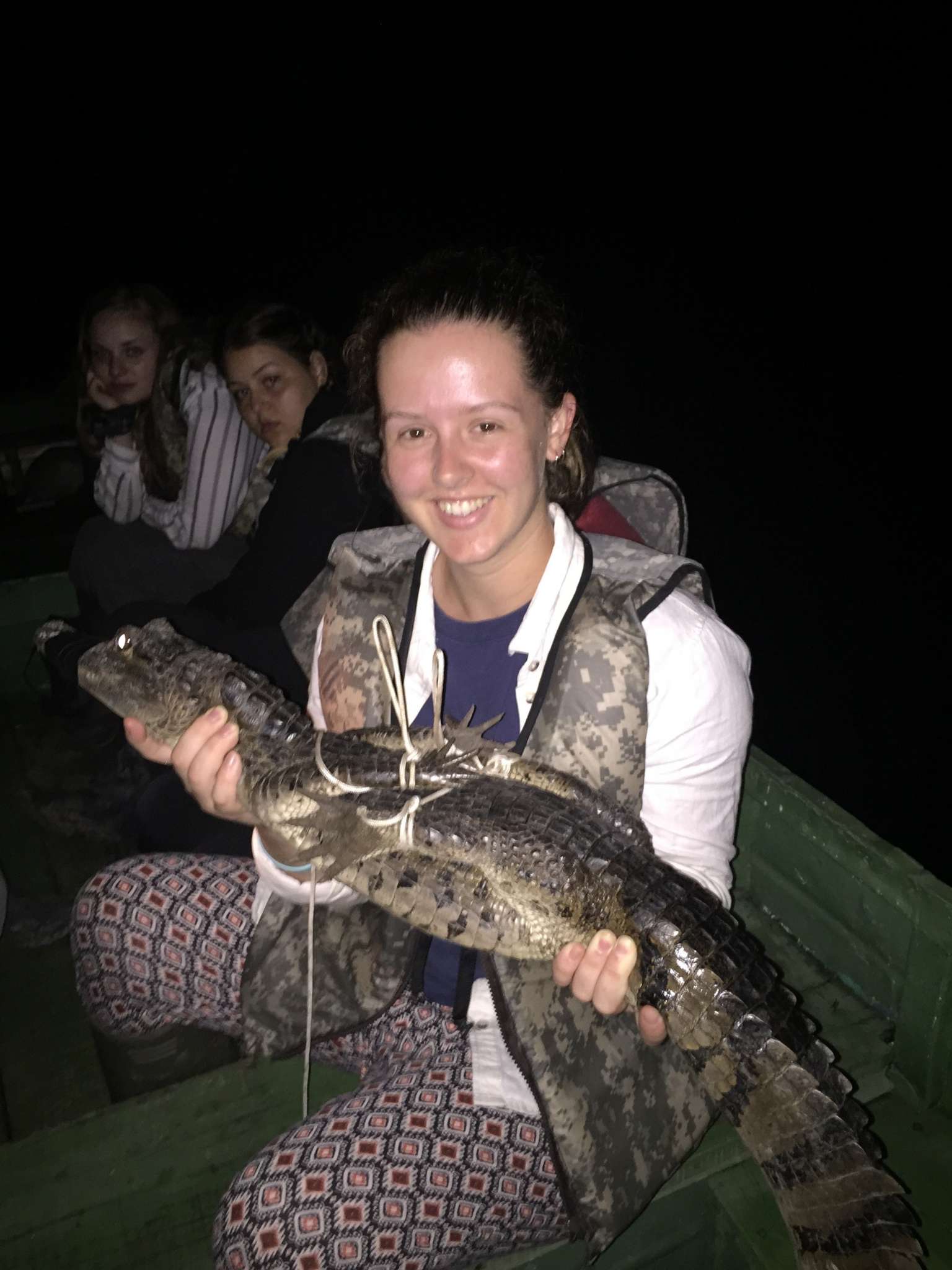 Time is a funny thing, and certainly waits for no man. This was our issue with the next rotation approaching faster than any of us cared to acknowledge. As you can imagine, being in the middle of the rainforest cut off from the grid, you have to socialise. There isn’t any instant internet to hide behind (at best there is satellite email that works according to its own unknown schedule). This being the case we continued to grow closer and closer until we truly were a close-knit family. 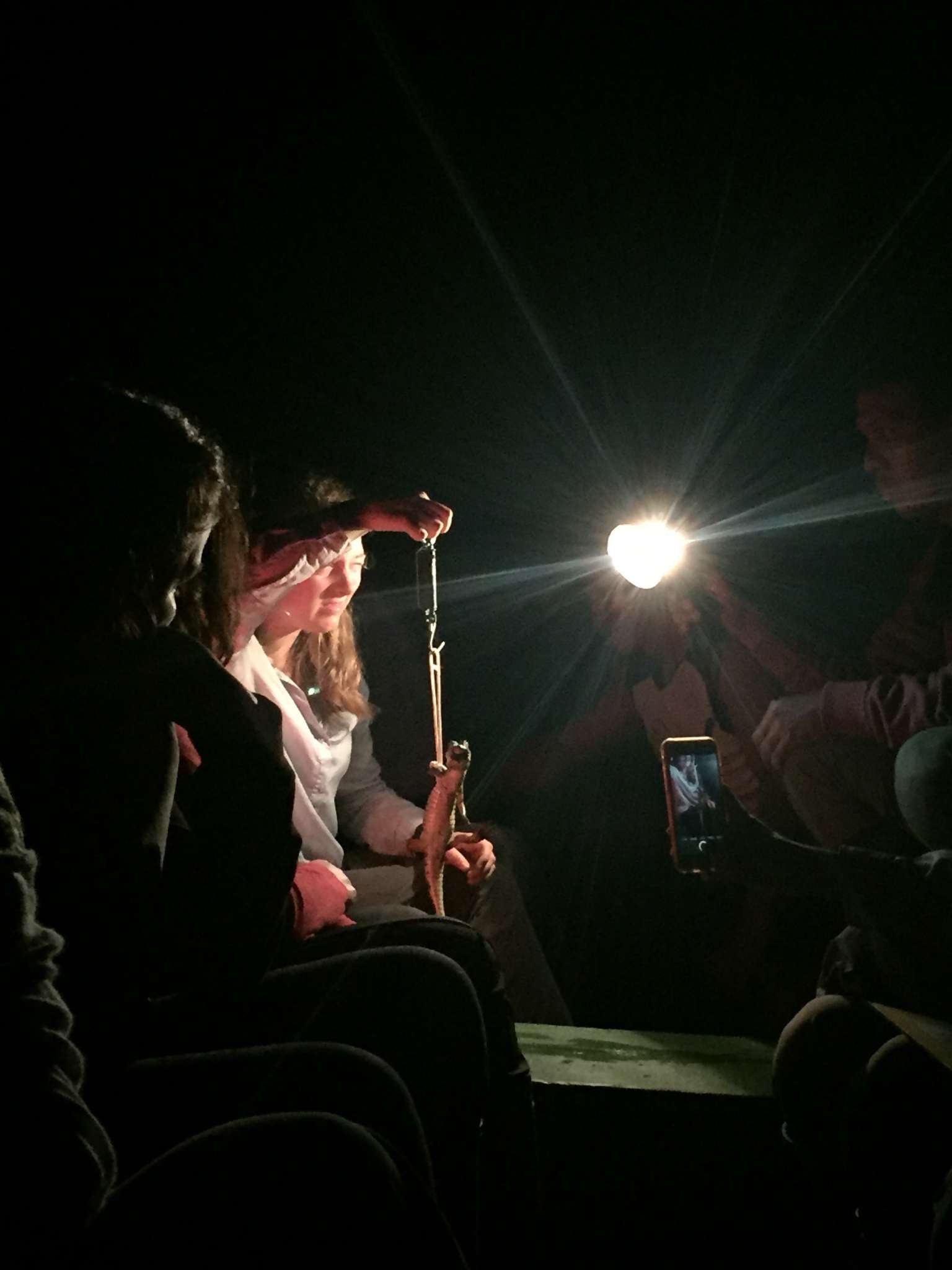 As the four week RAs’ last days passed by, and last surveys were squeezed in, it became reality; they were leaving.  All things considered we knew that this send off party had to be memorable, cards and drinks would not suffice. Here is where our creativity came into play. After the daily debrief, reporting the day’s sightings of each survey, the stage was set. Select awards were handed out to individuals from those that kept everyone smiling, to those with the best hair flick, with a goodbye video to follow. To add insult to injury on this particular
rotation someone else close to our hearts was departing, yup you guessed it – our beloved primatologist!  Having become the Mary Poppins to our Banks children, it was especially hard
to wave the Riõ goodbye on this occasion.
The following day off did not have the same relaxed vibe as the previous rotation; varying degrees of grief were being experienced throughout the boats. Friends had left, new romances were challenged by distance and only 13 remained- the smallest group yet. However, there was of course a silver lining. We all got a chance to help with other surveys, especially considering that we were deficient in the RA department.

This time around caimans caught my eye. The tales from my roommate of catching caiman were too much to resist. Out of my primate comfort zone, I suited and booted myself and boarded the caiman boat in the dark. Not even within the first 100m our first eye shine was spotted. Approaching slowly, something completely unexpected caught our eye: a capybara. The world’s largest rodent, along side a common caiman is something I will never forget. From 20cm to 1.8m our catch was impressive and being able to say I handled the large one and released it proves my previous point: primate girls are hardcore and not to be messed with! 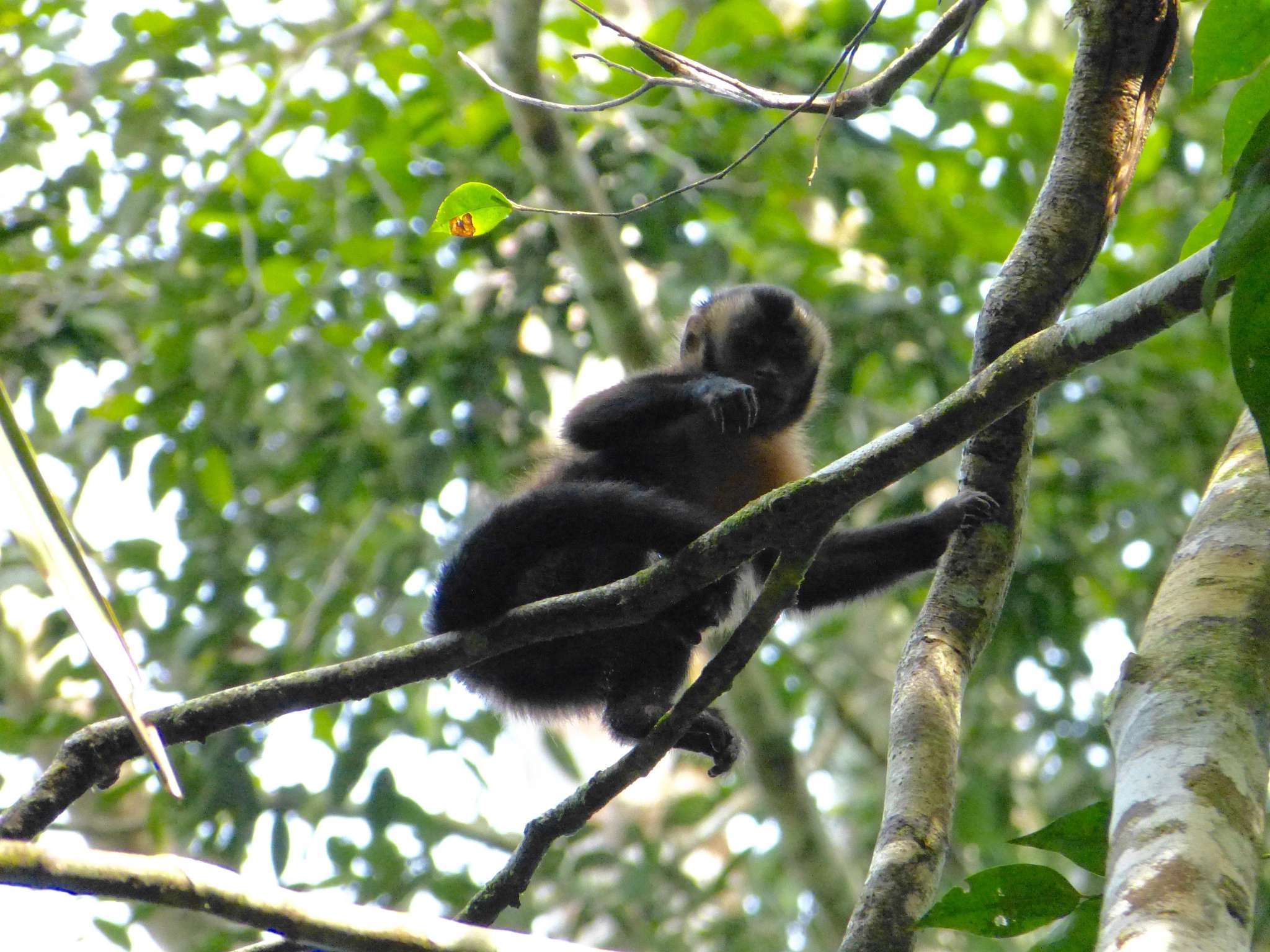 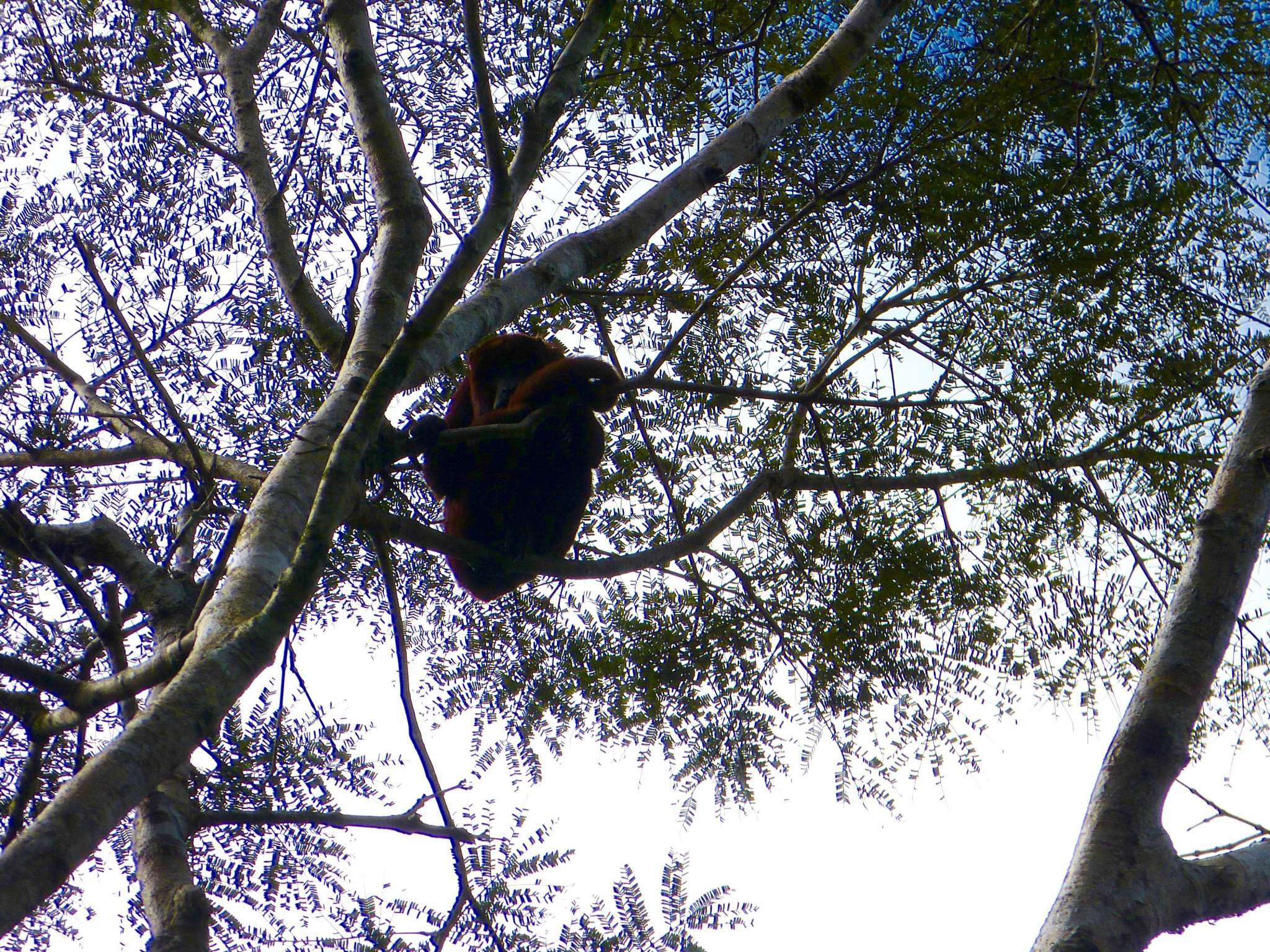 With one of the key elements of the primate surveys being silence, us primate girls have a lot of time to think to ourselves. This usually results in some ‘deep jungle thoughts’. At the forefront of our minds recently was the return of the Riõ; this rotation would bring a whole new set of four week RAs, schools and staff. The five days of change over seem to pass with increasing speed each time and even with all of us dissertation students being old hands at this game by now, nobody likes change. Plus, throughout rotation there was one factor that had not occurred to us yet: water levels.

Being a seasonally flooding forest, water levels cannot be expected to remain constant. With May to September being low water season and the Riõ being not exactly a small boat it was dubious that it would make it back to dock at PV2 this time around. Sunday evening rolled around and we got word that we would be making the move to meet the Riõ at PV1, the mouth. Bags were repacked and slung across boats, mattresses were tossed across as well as chairs, whiteboards and the essentials; coffee. We all had one last night on the Pithecia, crossed to the Clavero, and set sail the next morning. 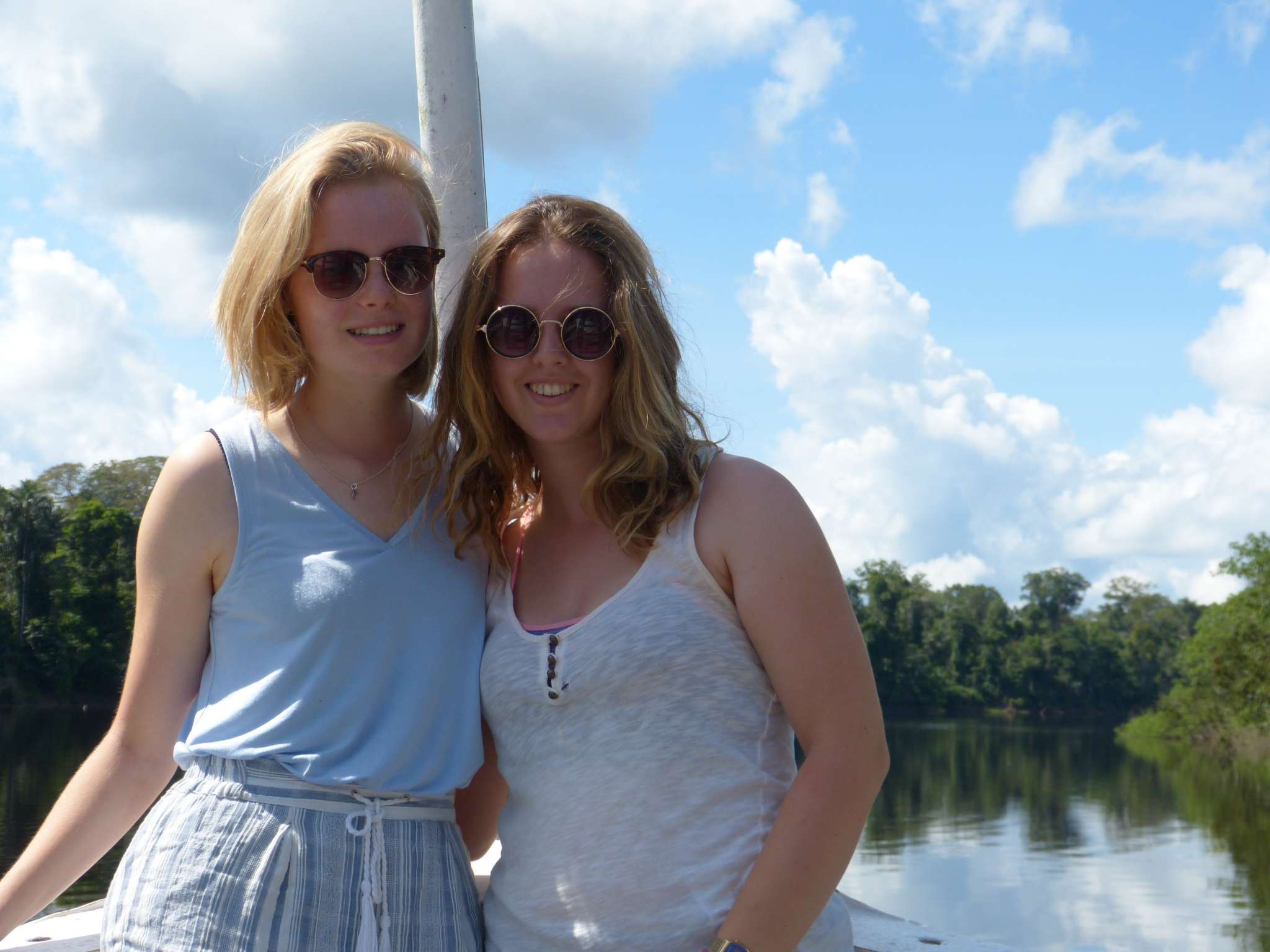 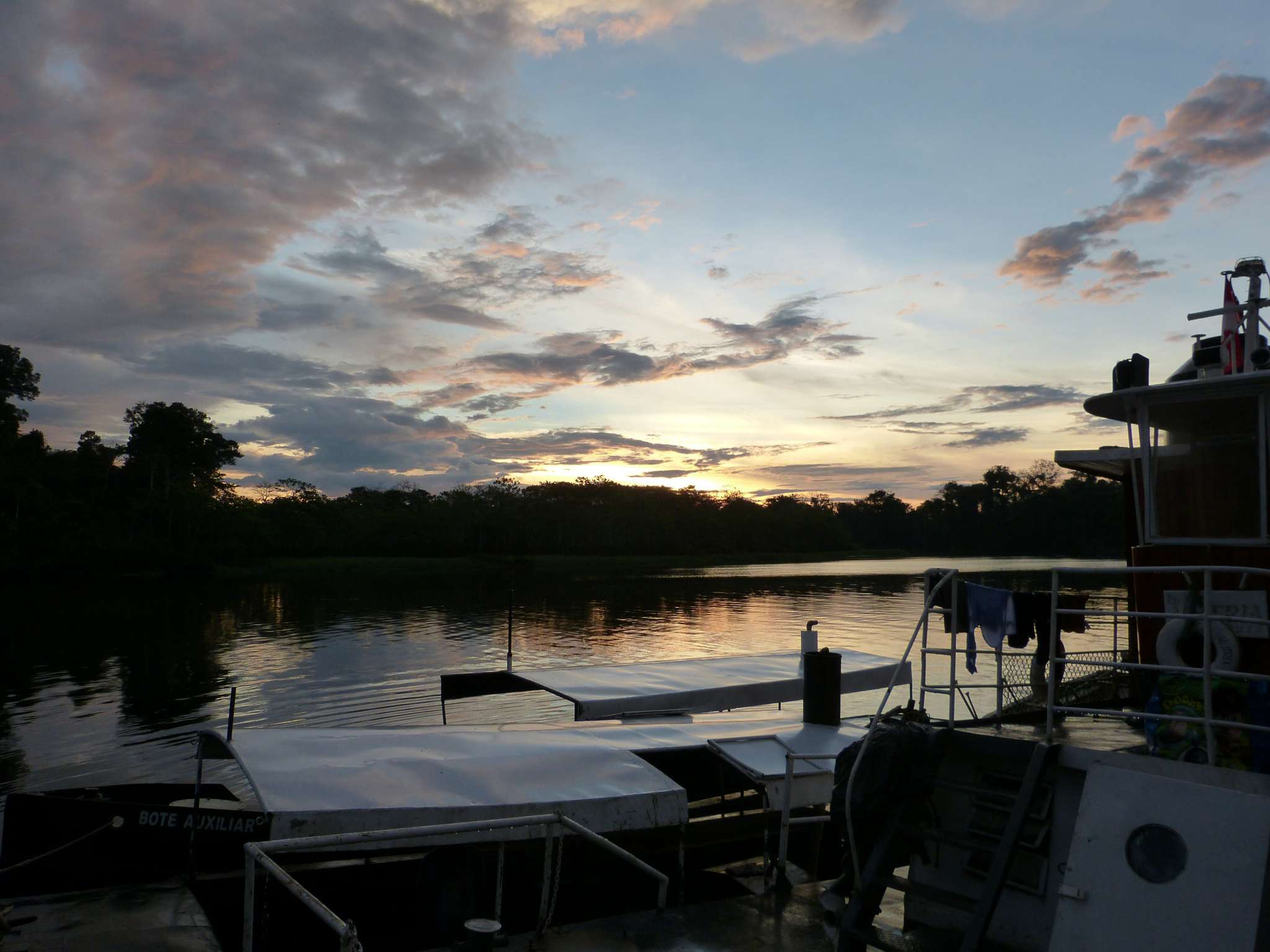 Travelling downriver, we all experienced mixed emotions. After living at a site for four weeks you become attached; the transects become familiar, routine remains the same and you begin to feel settled. Suddenly the tables were turned, we would be the new ones arriving to site. Making good time we arrived after about four hours after leaving and having docked the Clavero up to the Rio it was clear a lot of the aquatic wildlife was moving downriver with the fish and decreasing water levels. The number of pink and grey dolphins was greatly increased compared to PV2.

On arrival a breathtaking sunset set the backdrop for our first meeting at PV1. Here we were informed that the water levels were in fact rising and we would be returning that evening to PV1. With some stressed that several surveys had been missed, and others happy their data would not be squewed by a site change, all I was thinking was, “It all adds to the adventure”.

With surveys back on track, and all of us primate girls easily in the swing of it, life returned to normal in the Amazon. Constantly increasing our hours of data and surpassing the 65 hour mark we had to turn our attention to data analysis. This meant statistics lectures and meetings to discuss our projects. Suddenly my project became real, although the expected dread never came. This is something I have investigated in the field and I am excited to research further to see what my results truly yield, not just a piece of work I need to complete for a grade!

In a few days we will begin our journey home, I guess this means I have to organize my stow-away plan so I never have to leave!!

Again, I am 36’000ft above the Earth, and again I am buckled into a seat, however this time I am not nervous or apprehensive. This time I am at the other end of the spectrum – although I am not 100% happy to be on my way, it is not because I am unsure of what is to come, it is the complete opposite. I am devastated to be returning home. Don’t get me wrong, I love home as much as the next person; nothing is better than your own bed, a hot shower and a home cooked meal, but as I sit on this 12 hour flight all I want is for it to be a boat taking me back to the jungle.

Being on the other side of a rotation goodbye is not where you want to be. Waving goodbye and leaving roommates, friends and staff is no easy activity for a Thursday morning at 8am. If I thought the previous goodbyes were hard I had another thing coming. Tears ensued and faces had to be hidden, final hugs were had to the back noise of “we have to go, on the boat!”, ropes were untied and we were off.

Visiting the village of San Martín, where many of the guides live with their families, was a humbling experience. Seeing such happiness reminds me of one of the most important aspects of life; other people. As Amy Poehler said in her 2011 Harvard speech, “You can’t do it alone”, this trip has taught me that. You need to be open to collaboration even if just for data entry and collection. San Martín was such a joint and collaborative community and that is something I hope to take home with me, to stop comparing each other and instead support each other.

Not all of the dissertation students left with us as the six week mark, a few were finishing out the full eight weeks. Sadly this meant they were not able to be with us to say final goodbyes in Iquitos. We had a solution; one last survey all-together, and a dolphin survey fit the bill. We were all able to meander towards the lake and take in various wildlife – anacondas, dolphins, howler monkeys and turtles. The perfect finish. 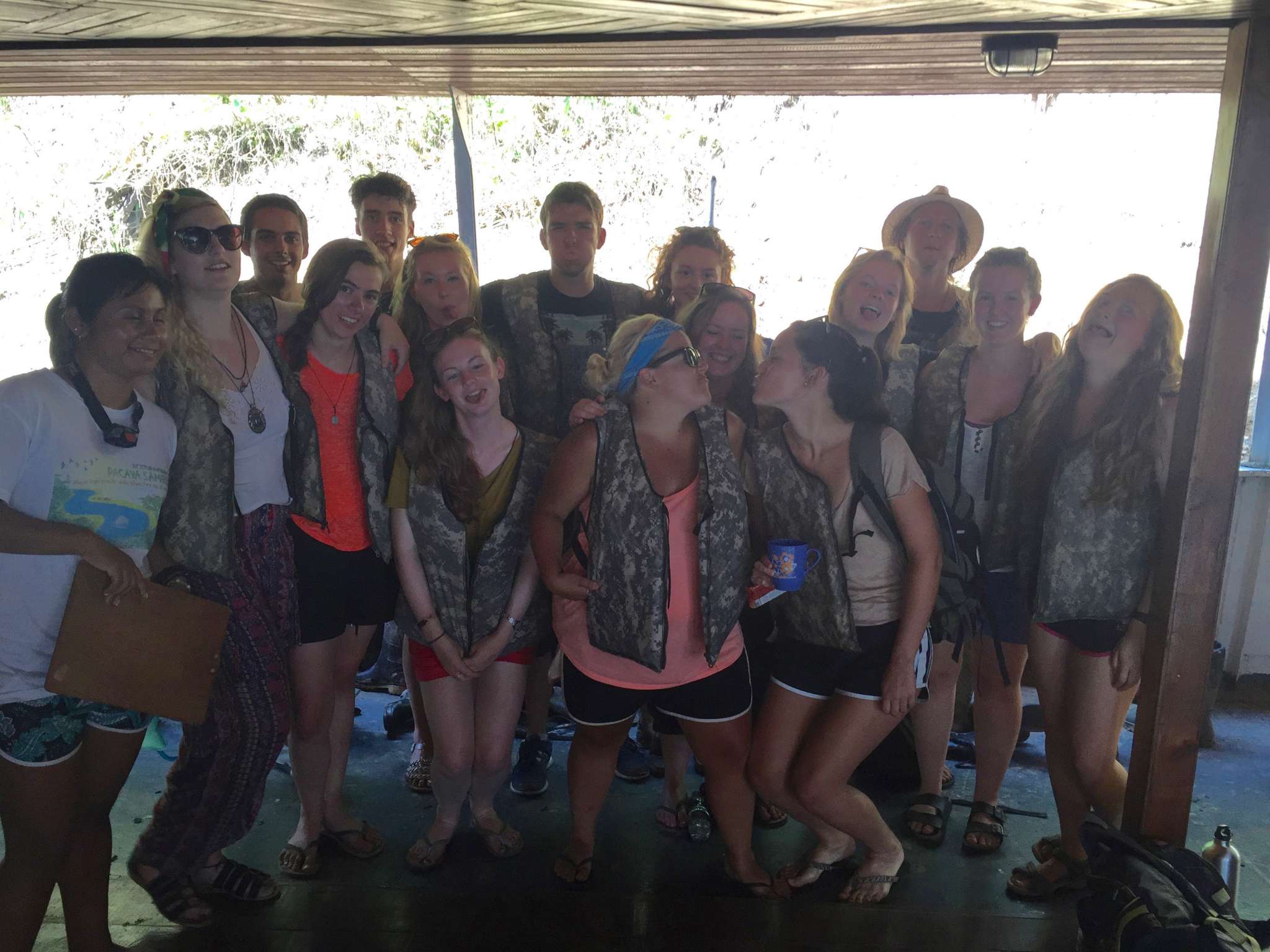 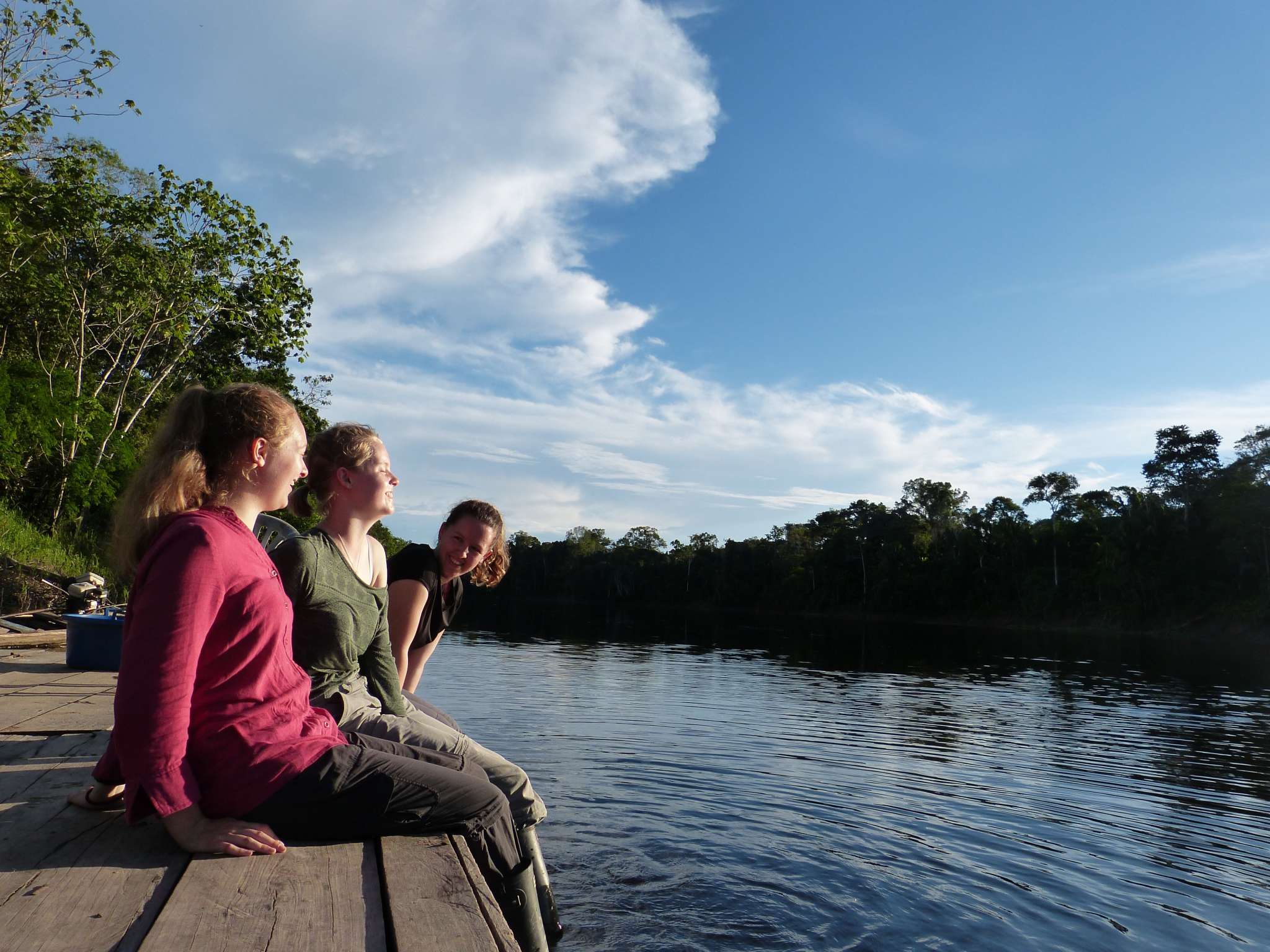 With the first airport transfers leaving after our evening out in Iquitos (mainly consisting of eating too much and upsetting our stomachs, whilst also salsa dancing) the fact we were all parting ways after six weeks together became real. We wouldn’t all be waking up together to sunrise over the Samiria River, or dining together over a rice based meal.

Afternoons would not be spent relaxing on the pontoon after a hard day’s surveys and none of us would be surrounded by the variety of wildlife found in the Pacaya – Samiria National Reserve.

Luckily I did not have to travel home alone, with three others the journey home was made that much easier. Last hugs were had in Iquitos before the rotation made its last return to PV1, and again tears flowed. 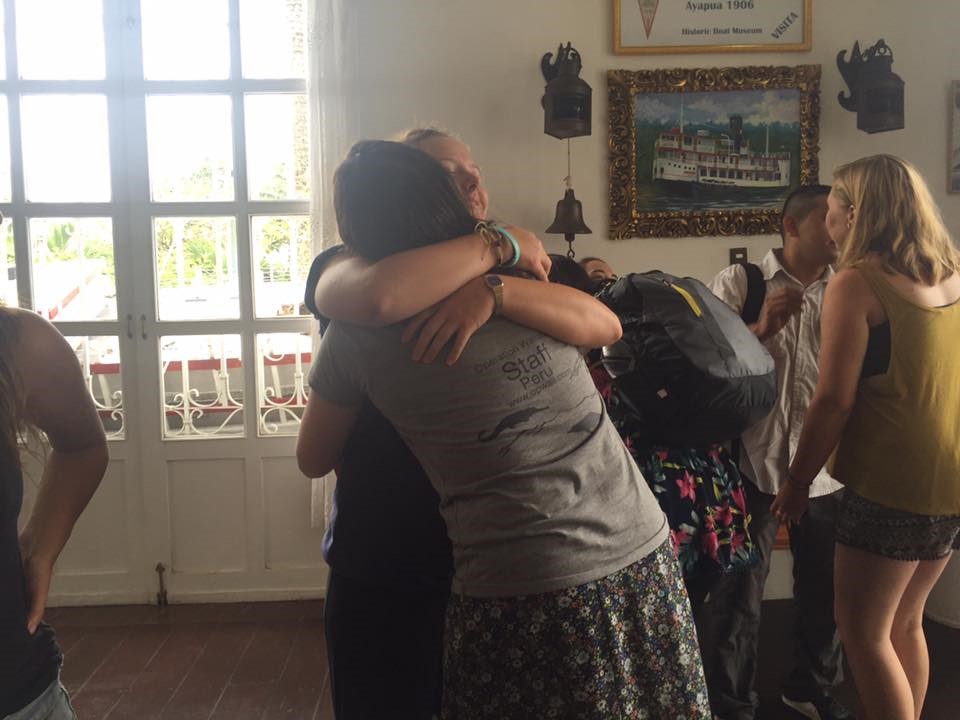 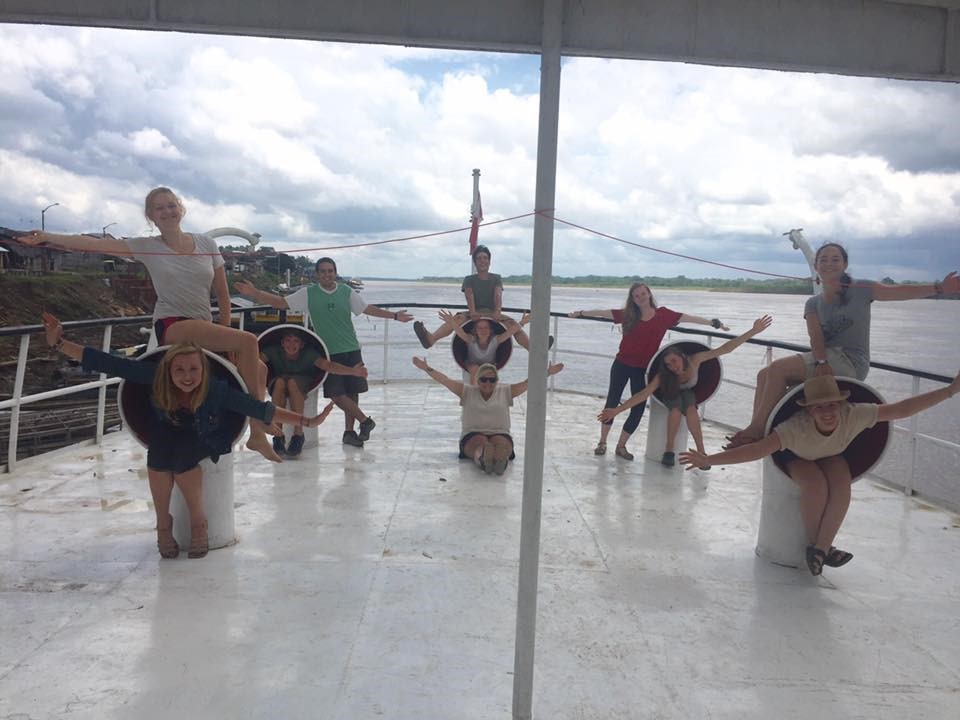 With all of us home safely and back on the grid, the Facebook surge began of pictures being uploaded, friend requests being accepted and normal routine beginning.  Having to talk to each other via phone and text could not be further from what we are used to but God bless modern technology meaning we are never more than a text away.

As the post Peru blues settle, reunions have already been organized meaning we won’t be apart for long. I went to Peru to simply collect data, and I have come back with so much more; memories, friends and a change of outlook on life. I may be home for now but nothing can keep this jungle queen from returning.