Written by and photos courtesy of Catherine Yates
To find Catherine’s own blog, follow the link to catswonderings

Catherine spent 6 weeks with Opwall doing her dissertation on primates and has very kindly given us blog posts that we will publish as part of a mini-series for the next few days.

The Musings of a Budding Primatologist

Sitting on a 12 hour flight you have a lot of time to think about what you are doing. It never crossed my mind to be nervous, through all the excitement, about travelling for five days deep into the Peruvian Amazon Rainforest to live for six weeks, until… I was buckled into a seat 36’000 ft above the Earth on my way.

To most 21 year olds coming off the grid is a scary prospect; “how will all my Facebook friends know what a great time I am having?”, “I won’t be able to have the most epic Snapchat story of the year”, and of course those precious Instagram followers maybe be lost. I, however, relish in this rare opportunity to live without technology at the center of my life.

Starting off at the epicenter of the Rubber Boom period, Iquitos, we bused to Nauta; “the gateway to the
Amazon”. From here we travelled along the sediment rich white water of the Marañon river for three days until we joined the tannin rich black waters of the Samiria River, stopped only by the copious numbers of pink and grey dolphins frolicking, and arrived deep in the heart of the Pacaya – Samiria National Reserve. The introductory lectures throughout transit transport you back to this boat’s heyday and strolling the corridors, her majesty is not hard to imagine and relive.

Having never been on a cruise of any sort and traditionally hating boats with a fiery passion, many were dubious that I would survive at all, let alone attempt to produce a credible dissertation. Although the Riõ Amazonas, built in 1899 in Scotland on the Clyde, cannot be classed as a modern super yacht, despite the fact it does indeed have toilets, I would say it’s doing pretty well for being 117 years old. Used originally to transport rubber in and out of the rainforest, and then haul tourists in and out between periods of excessive rest, her life as a research boat since the late 90s is well earned.

Travelling on a floating antique allows the apprehension and excitement of the coming weeks to build; I never thought I would make it to the Amazon – and here I am. 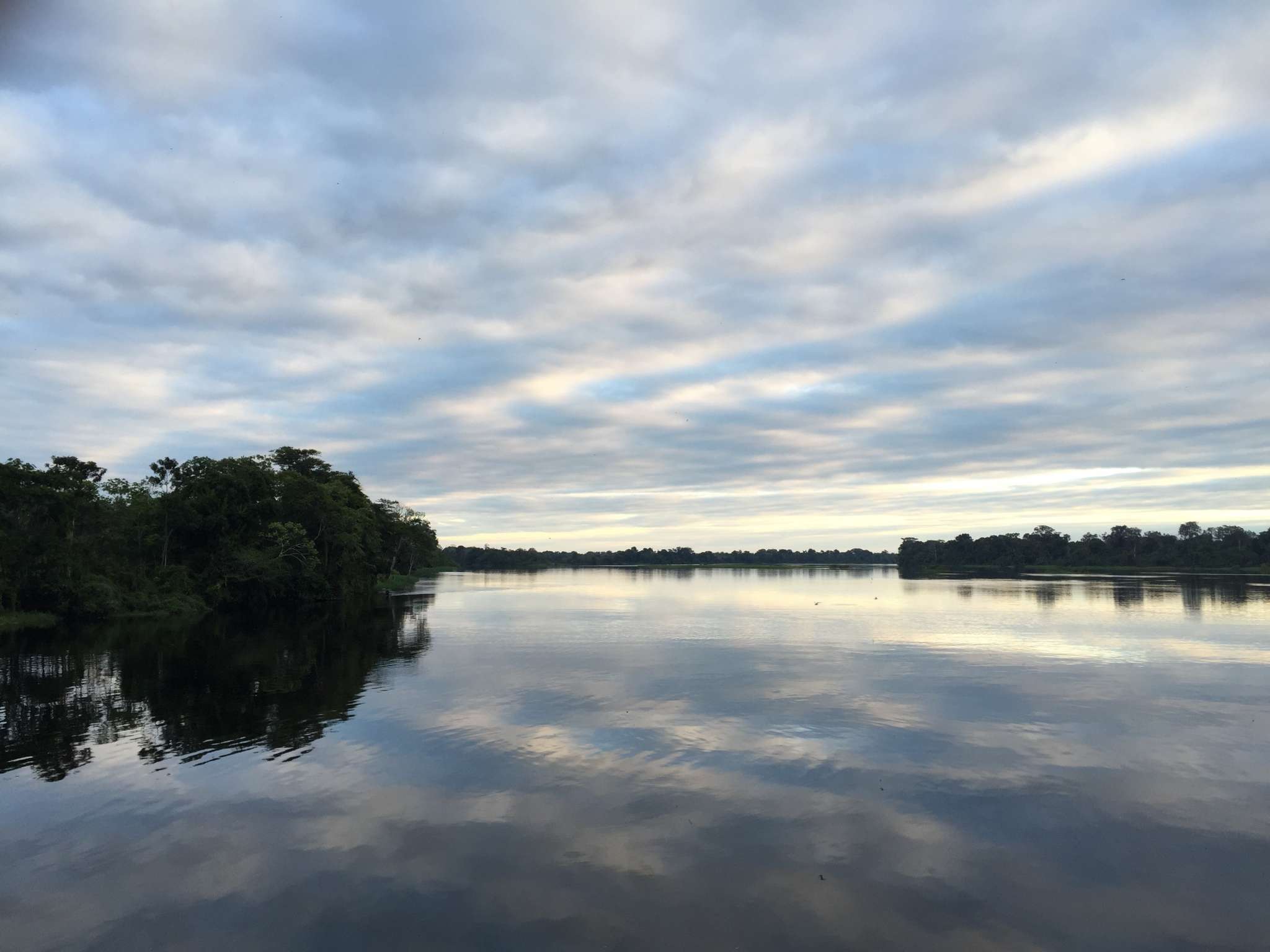 With society’s obsession today that ‘bigger is better’ people often forget the little things, however, nothing is ‘little’ in the Amazon. The scale of the Amazon can be intimidating. Everything is big, that is except our mighty boat that delivers us to the transects; the Titanic. 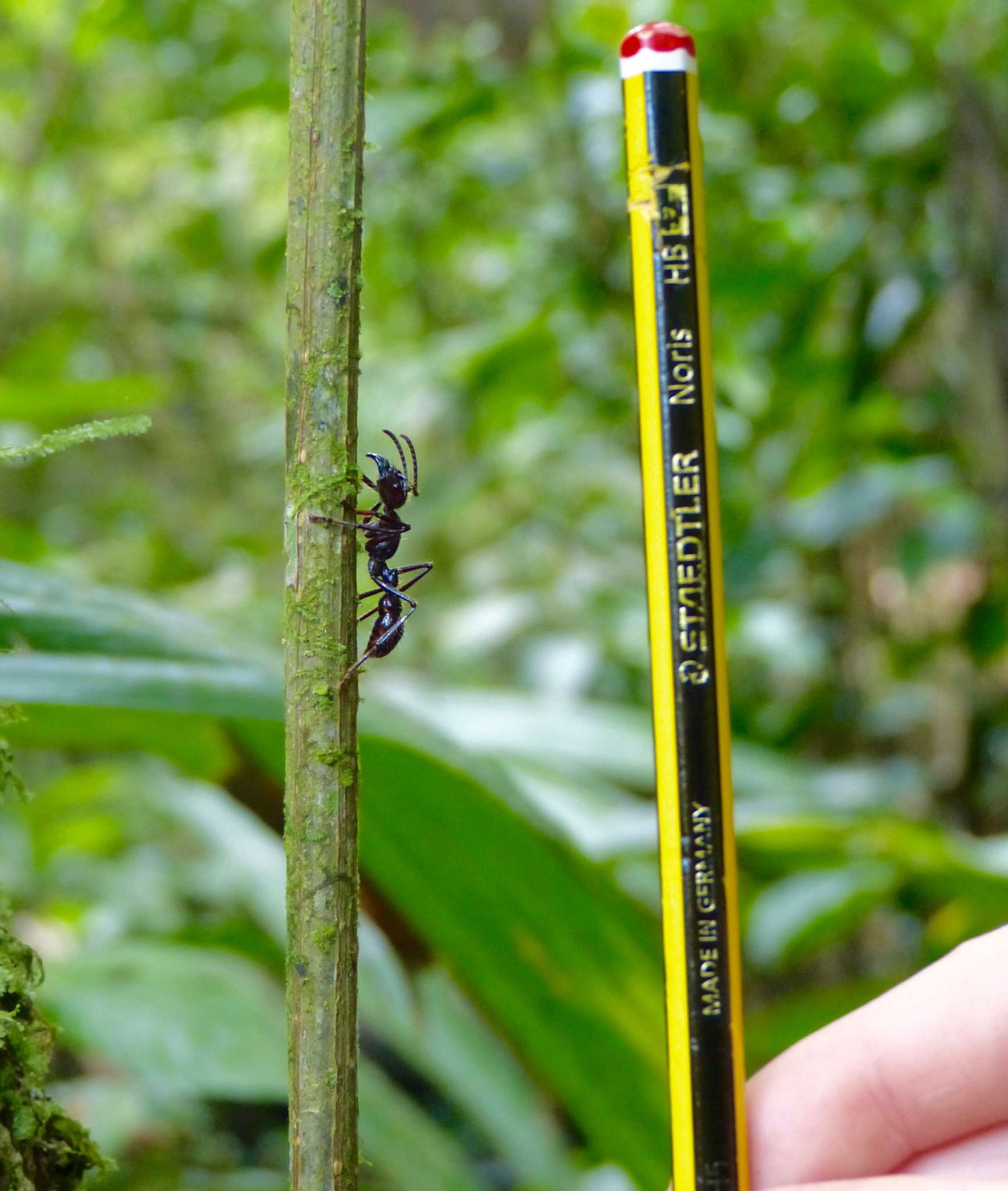 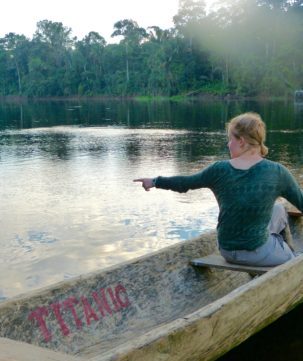 From the six metre caimen, surviving from the Triassic period, right down to the badass bullet ants, who easily live up to their name as anyone unfortunate enough to get on their wrong side knows, not everyone can hack this environment. This was especially true for an unfortunate student who screamed in terror over a spider in his room, “IT’S HUGE”, and his teacher replied, with patience wavering, “It’s the Amazon – EVERYTHING is going to be big”.

The first survey outing for us ‘Primate Girls’ was another ‘big’ one – learning all the methods whilst never letting 30 squirrel monkeys out of your sight, and recording their behaviours every three minutes, as well as following them through whatever the jungle throws at you is no small feat; Primates is hardcore. 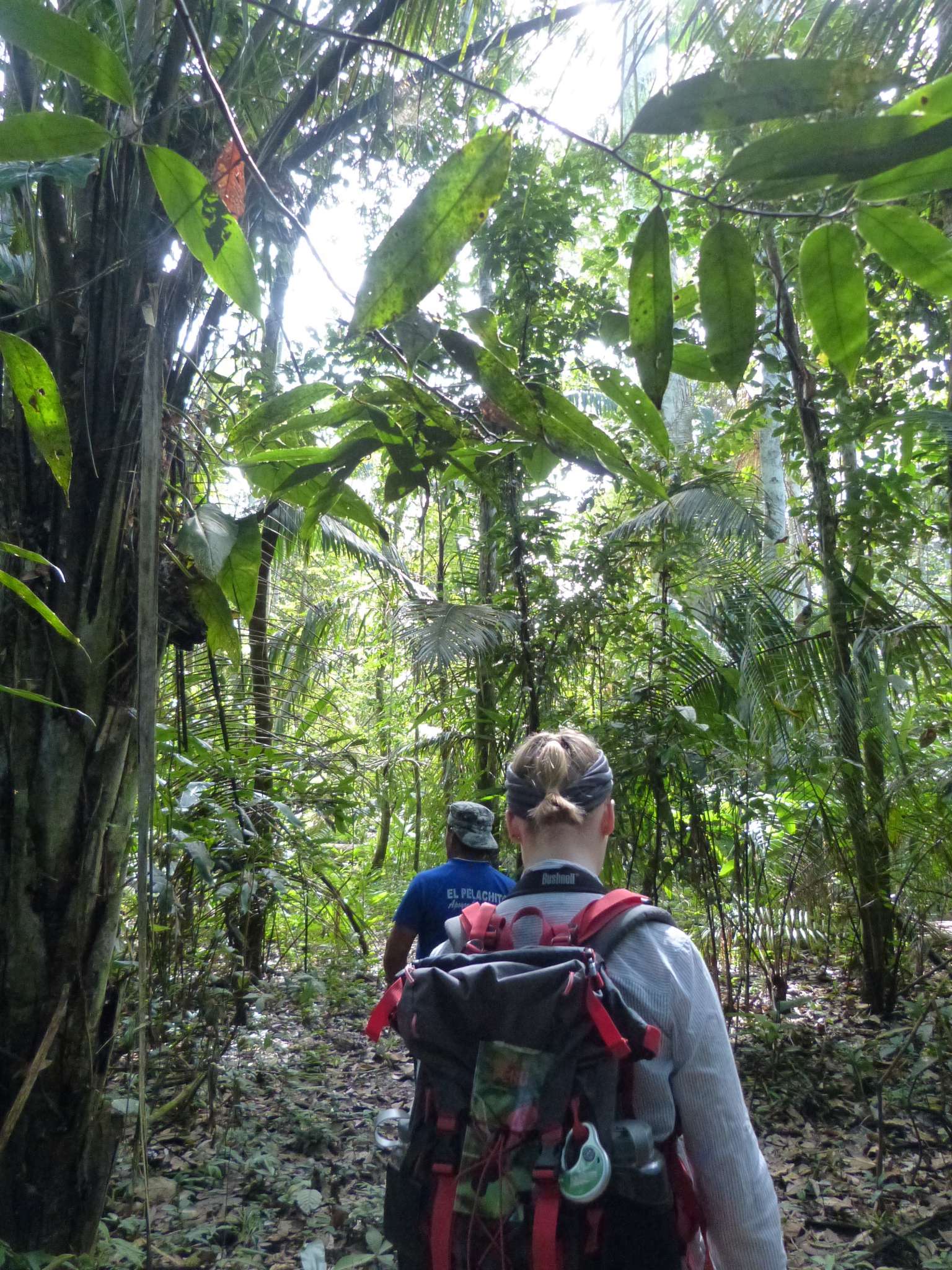 Watches synchronized, we typically leave at 7am, after a breakfast of eggs everyway, rice and breadstick circles (that at a push could be considered ‘doughnuts’ if you’re desperate) with jam and we don’t return until 12.30pm – for another solid meal of rice and copious variations of beans. A usual afternoon consists of another transect trek in search of primates, returning for a plentiful plate of pasta to replenish our stolen energy before an evening debrief of the days events. A mixture of data entry and early bed times follow.

Kept motivated by the soft calls of capuchins, squeaky squeals of squirrel monkeys and hollow hoots of the howlers we trek on day after day whilst others may meander down river, simply in search for aquatic dwellers.

As the weeks loom ahead and routine settles in, the scale of my impending dissertation minimizes to the backdrop of the Amazon Rainforest. Everything is on a bigger scale here, but that’s what you come here for – the enormity.

“The Rain Only Gets Worse” 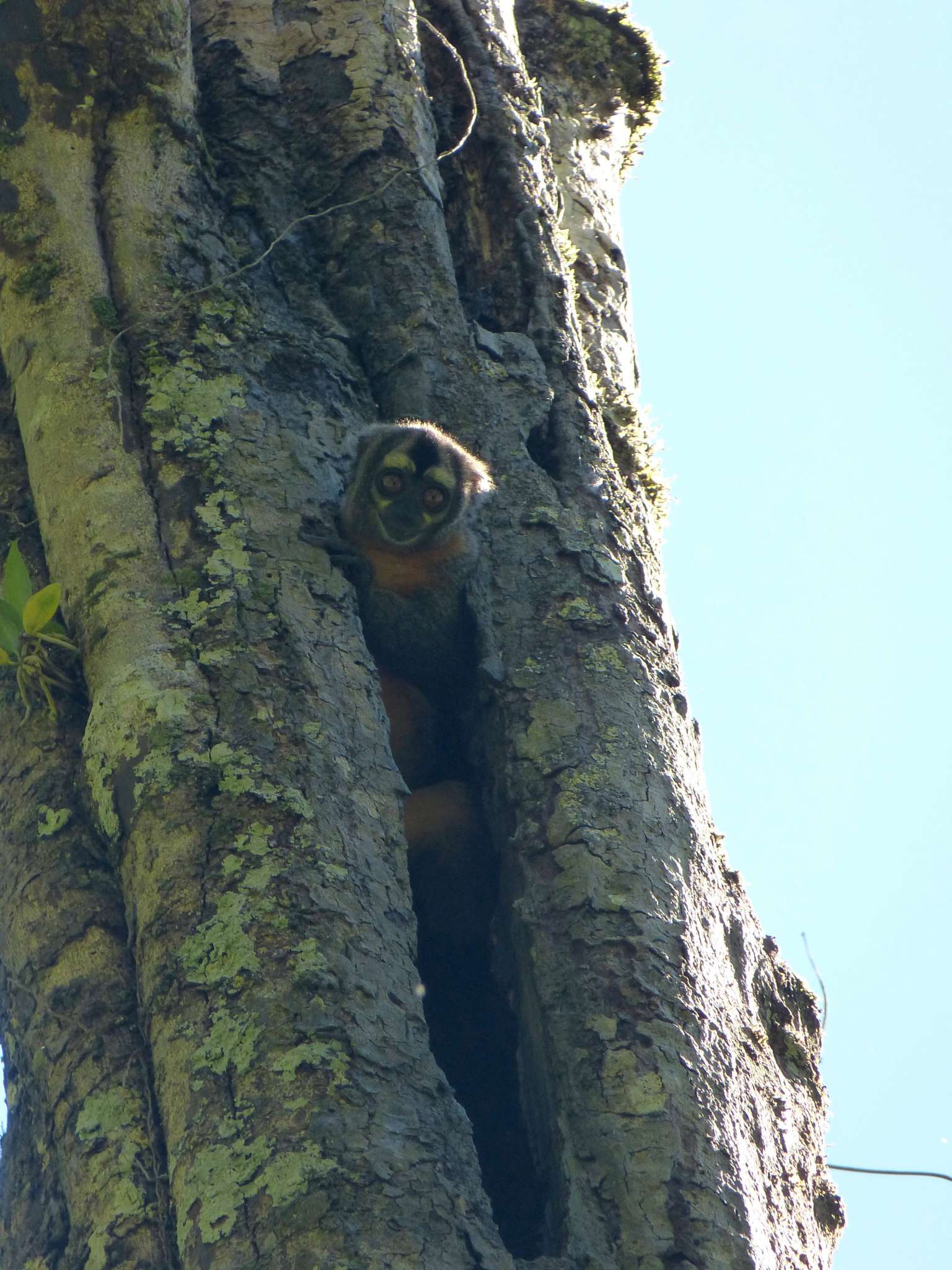 As incredible, breathtaking and gobsmacking as the Pacaya – Samiria National Reserve is, after trekking through it for only a week distant thoughts of “what have I done?” seemed to surface. Although mostly flat with a surprising lack of stones and rocks the going is not for the fainthearted. Having also been fortunate enough to live in the Indonesian rainforest and the small amount of forest left in Madagascar I thought I was set. I thought I knew the game and this resulted in my blazé attitude and response whenever people inquired about my summer plans, “yeah, I’m going to live in the Amazon for 6 weeks – no big deal”. How wrong I was.

This is, without a doubt, the jungliest jungle I have had the pleasure (and probably ever will) to visit. The constant humidity of a seasonally flooded forest, combined with the geographical location of the tropics this close to the equator provides the perfect haven for everyone’s favourite disease carrying insect: the mosquito. There are thousands; literally hundreds of thousands (and sadly there are no similarities to the sugar sprinkles, before you get excited) about and they all want a share of you. Swatting mosquitos, peeling spider’s webs off your face and out of you hair, as well as trying not to fall down water filled holes takes its toll. However, you cannot be grumpy looking up at the elusive night monkey peering down at you. 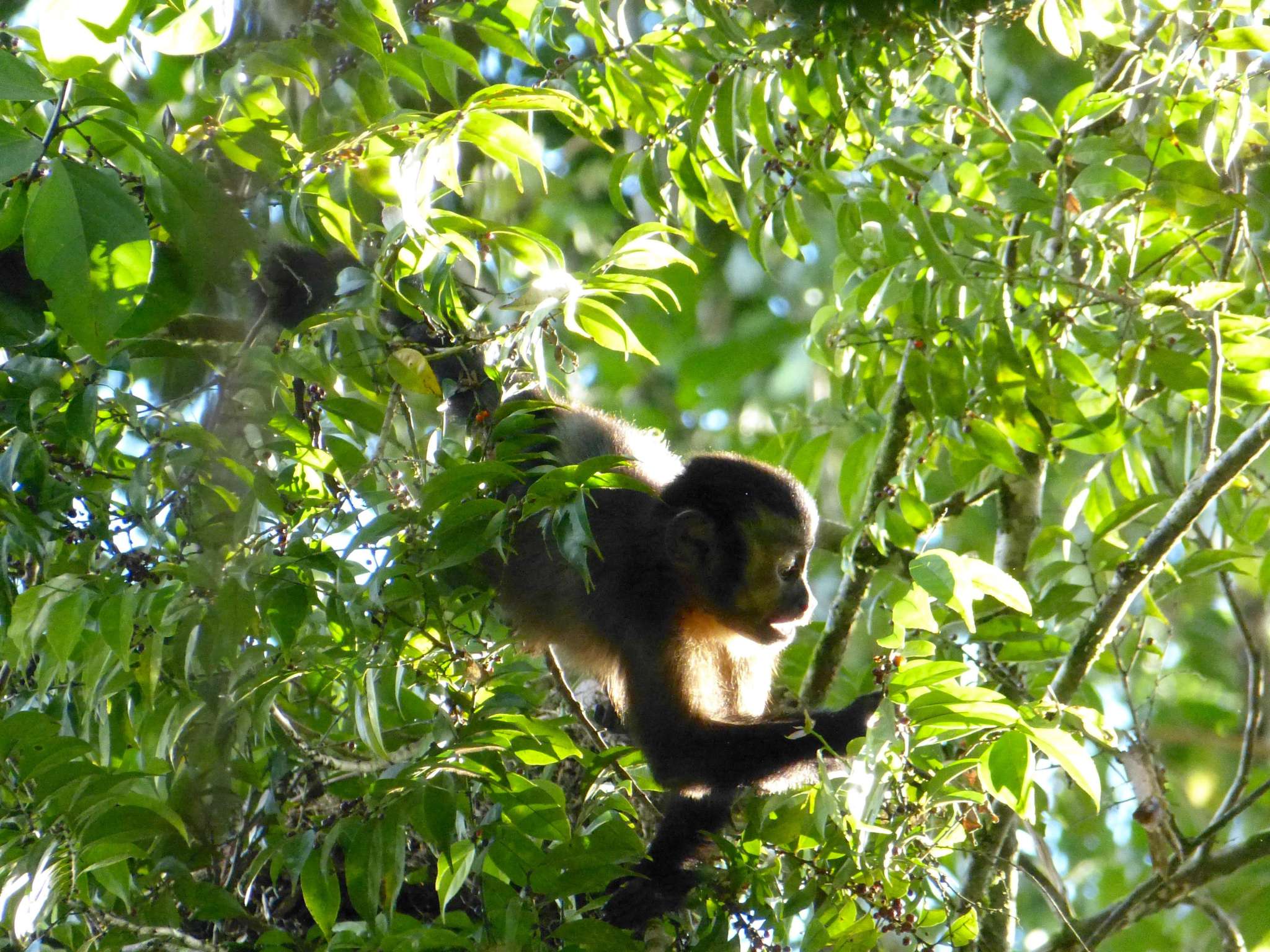 One particular day comes to mind when thinking of the trials and tribulations of the jungle. Having had a fabulous day managing to follow Brown Capuchins for over two hours, have them relax enough to feed on palm fruit over you with no regard (resulting in fruits landing on your head) is a privilege. Our afternoon transect proved more difficult, but in no way disappointing. Coming across Monk Saki monkeys, a yellow-footed tortoise and tapir prints is not your average Thursday, but that’s life here.

Reaching a ‘lagoon’ at the end of transect six gave a much needed break before returning ‘home’ for the evening. As our ‘Primate’ group came to a pond crossing the rain started. Being in the rainforest whilst it’s raining is incredible, until a certain primatologist informs you “it only gets worse”. Naively not believing I trudged on confidently to soon be drenched despite my waterproof, underwear included. The mighty Titanic had taken on water but contrary to history, was not beaten this time around. We were wet, but not defeated. 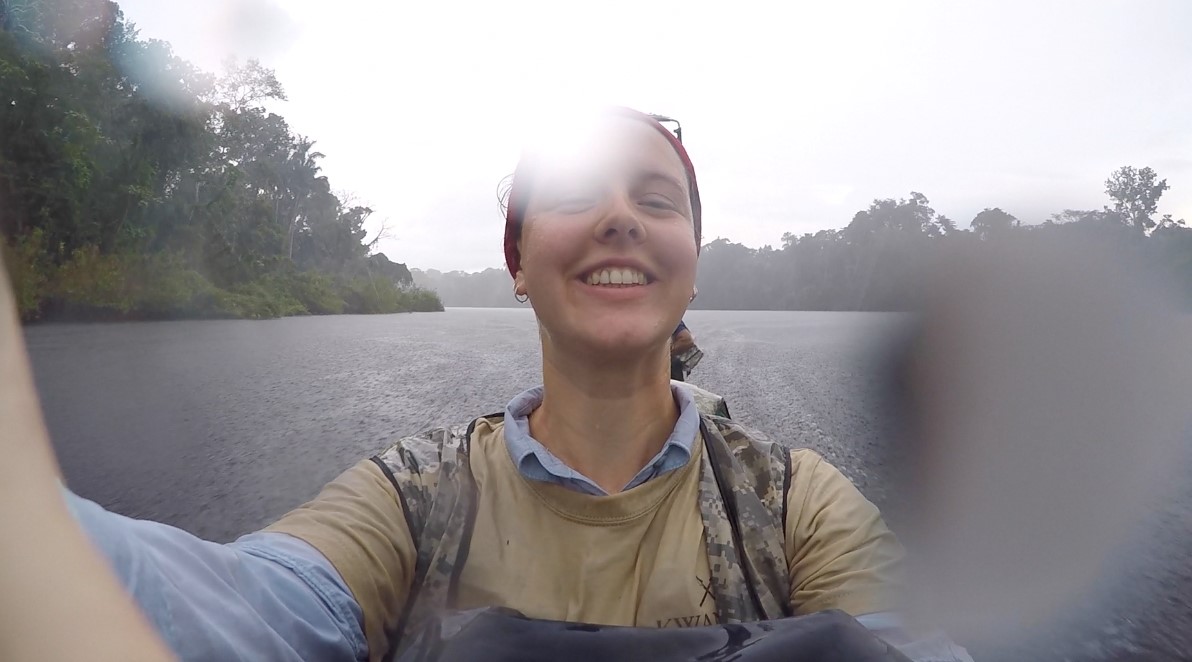 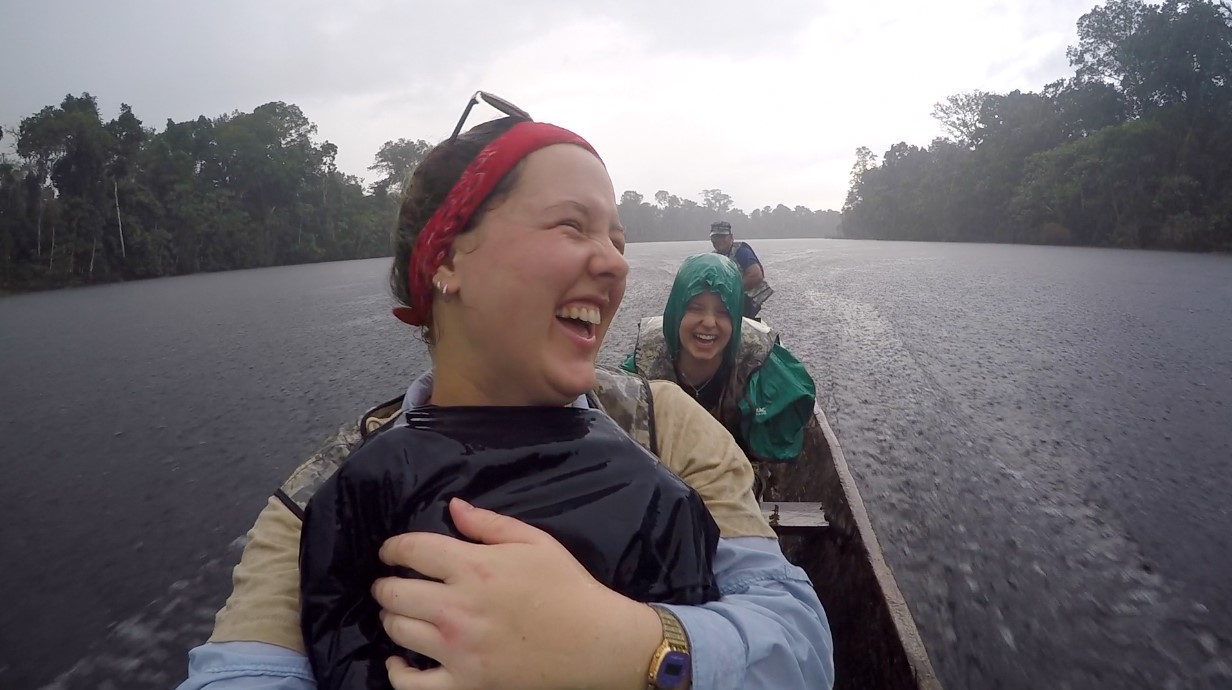 Part 2 will be published tomorrow with another exciting post from Catherine!