Written by and Photos Courtesy of Emily Tees

This summer I had the utmost pleasure of spending almost three weeks in the Peruvian Amazon with other Southridge students on a biology trip. While in Peru, we assisted biologists from all around  the world and helped university dissertation students with the collection of data to further protect an area of the amazon known as the Pacaya Samiria. The Pacaya Samiria is a national reserve of 20,800 km squared hosting an area known for its rich biodiversity. While in Peru we stayed on a restored boat named the Rio; a boat that I miss with all my heart. On the Rio we stayed with two other school groups – one from Toronto and another from Sao Paulo. Many of these students would tell you about all of the amazing animals we saw like the pink and grey river dolphins, groups as big as or bigger of twenty five spider monkeys (an amazing site I saw on my last transect as they were all running to hide for cover from the impending rain), howler monkeys, brown and white faced capuchins (think Marcel from Friends), saddle backed tamarins, sloths, great river otters, the most amazing birds, macaws and many others. However, seeing as this is about my experience I’ll tell you about my favourite survey: THE FROGS!! 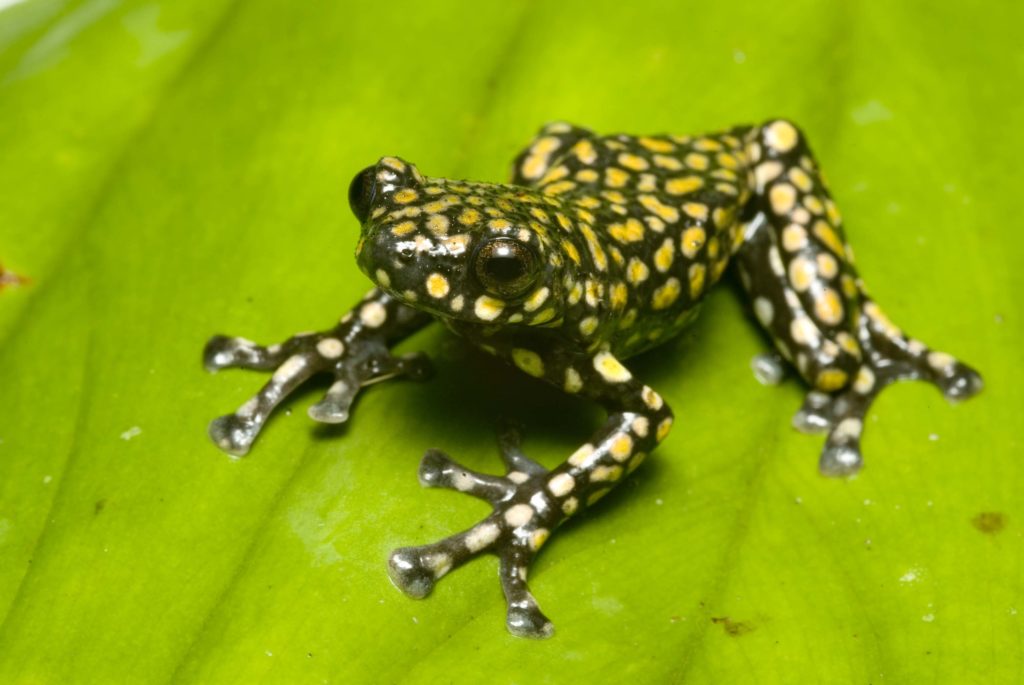 You cannot even imagine how miraculous it is to hold a little frog sometimes as small as a dime in your hand after catching it off of some nearby foliage. The feeling of a tiny little body jumping inside your hand is truly incredible. Frog surveys begin around 8:30, when it is nice and dark outside, since the sun sets and rises around 6 and the sky is just bathed in stars so bright we could see the milky way and even Jupiter. At this time, everyone on the survey grabs a lifejacket and heads onto a little speedboat with Jessie the herpetologist (the nicest human and most passionate person I will ever meet). The group of about ten to fifteen of us then heads up river until our local guide drives our boat right into a large patch of floating vegetation. Upon doing this you can immediately hear all of the frogs croaking, since the engine is turned off. For the next 15 minutes everyone hangs, reaches, and even uses paddles to catch frogs (sometimes even defying gravity as they reach unbelievably far to catch them). All the while ignoring the thousands of huge hairy spiders that infest the same places the frogs live, and the wasps that will attack your face if you leave your headlamp on for too long. We were all just too shocked by how amazing these frogs were, and how lucky we were to collect data about them. Depending on how many frogs we caught, we spent anywhere from thirty minutes to two hours or more processing frogs by recording species, age class, gender, SVL, and the already recorded location of capture. My group once caught nearly double the normal amount with 35 frogs. We were out until 12:30 after convincing Jessie to do another survey, as well. The four species of frogs that you are likely to catch while on a survey is: the Hypsiboas Punctatus, Lacteus, Triangulum, and Harold frog. The amazing thing about the Punctatus (not that they all are not amazing) is that it was just recently discovered to be the first known fluorescent frog a site we were within one of the first three hundred people to see. The glow these frogs create is completely miraculous especially when it transfers to your gloves as it is contained in the mucus that they secrete. Funnily enough, the gravid females created the strongest light when shown upon.  While in Peru we learned how to identify all four different types of species just by the shape of the snout, location of the eyes, colour and size. For instance, the lacteus frog is known as the jumpiest species, sporting the strongest legs. It can also be identified by its more visible blue veins running along the side of its body. Another completely mind boggling frog that we saw was a Triangulum with a giraffe morph (the rarest morph). It was basically the coolest thing you will ever see as this tiny and beautiful frog has the pattern of a giraffe covering its entire little body.

For anyone who has actually read this entire thing, I am high fiving you through the screen – a gold star to you! But, if you made it this far know that I am almost done and would like to urge you as strongly as I can to go on this trip. It will re-shape how you view the world entirely, provide you with friends all over the world, and gift you with once in a lifetime knowledge and experience. Once you go to Peru, you will miss everything about it: the hum of the boat, the sounds of the rainforest that never quiet down, stars that you strain your neck trying to see all at once, showers in the amazon rain, and finally the animals and people that you desperately hope to see again someday. It truly was the experience of a lifetime.