In 2010 I started my A-Levels and knew I wanted to continue learning after that, but wasn’t sure what to study or which career path to pursue. However, not long after starting at sixth form, I heard of something I couldn’t have imagined – a field expedition for biology and geography students to Madagascar. I had barely left the UK before, but I was captivated by the idea and decided to express my interest anyway. Soon after I received an email to say I could join the expedition on receipt of the deposit. This was the first challenge! I spoke to my parents that evening and they were so encouraging. They really believed it was a great opportunity for me and that I shouldn’t pass up on it too easily. So I confirmed my place and started job hunting! The next year passed quickly. I had weekend jobs, did regular babysitting and sold raffle tickets to find the rest of my expedition fees. My Christmas and birthday gifts were all very practical to cover things I would need – a water pouch, a rucksack, walking boots. Before I knew it, although I could still hardly believe it, I was on the plane to Antananarivo! 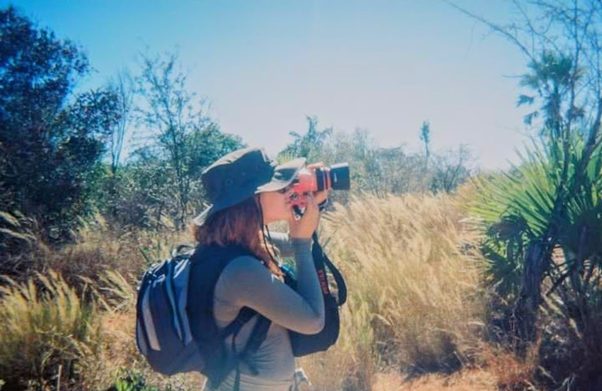 Livvy in Madagascar, taking a photograph.

The experience I gained in Madagascar was breath-taking. Camping in the dry spiny forest, hiking to field sites, sitting in on lectures about phylogenetics and carbon counting; it all expanded my horizons. Surveys were my favourite part despite the long walks and late nights – these included herpetofauna transects, lemur behavioural studies, habitat plotting and more. I met scientists who were so passionate about their research and would try to answer any question I asked. I felt the two weeks taught me as much as I could’ve learnt in an entire term in a classroom, but more than that, it has put ideas into my head about the direction my entire life could take from that point onwards. 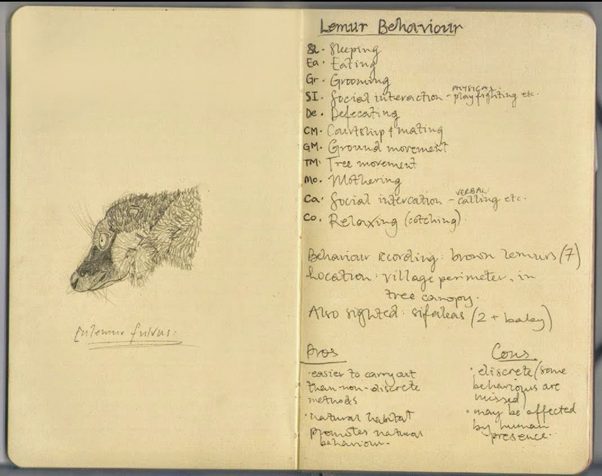 Scan of Livvy’s field notes from the lemur behavioural study using an ethogram. A quick sketch of a brown lemur (Eulemur fulvus) side profile is on the left page and a list of lemur behaviours and other notes are on the right page. 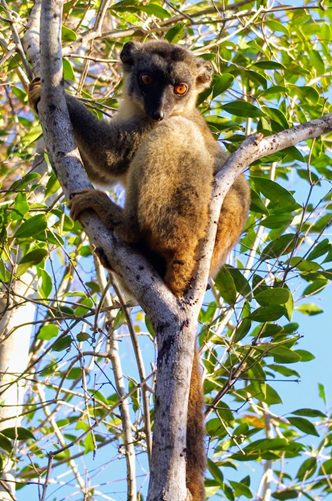 Livvy’s photo of a brown lemur (Eulemur fulvus) in a tree just above head height. This species can be shy but the individual pictured seemed very curious!

Once home, I found the BSc International Wildlife Biology at the University of South Wales, with lecturers who had worked closely with Operation Wallacea almost since its inception, and knew it was where I wanted to go. I took my place as a student in the Alfred Russell Wallace building in 2012.

In my second year, a Tropical Field Ecology module took us to the Operation Wallacea base camp in Cusuco National Park, Honduras. I found myself in awe of the cloud forest. We learnt how to carry out invertebrate surveys and megafauna surveys; we visited a local sustainable coffee plantation. But the highlight for me was mist netting for birds and bats. I quickly became fascinated with seeing bats in the hand and learning to identify the many different species, then recording their echolocation calls as they flew away into the night. 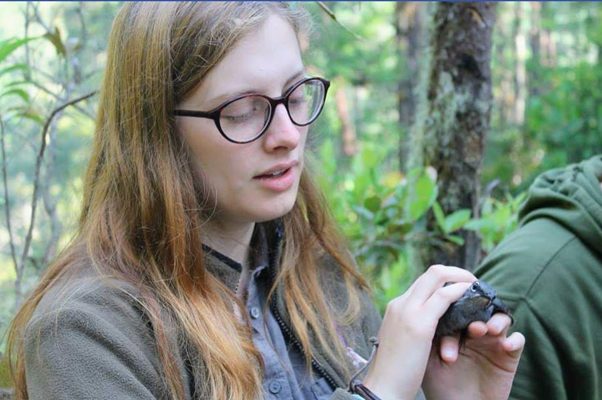 Livvy in Honduras, holding a bird which has been safely extracted from a mist net.

I was encouraged by my dissertation supervisor to plan a project on bat species diversity and a few related topics were available with Operation Wallacea. The Wallacea Trust were offering partial grants for those who chose to study at the Indonesian research stations, thus I applied to collect my data on Buton island. I was grateful to receive additional funding from my university and the Welsh Government to facilitate this. I also worked holidays and weekends, sold raffle tickets and held a gofundme for my rabies vaccination (an essential for anyone who is going to be handling bats).

I reached the field once again in 2014 and was made to feel an important part of the Bat Scientists team. The lead Bat Scientists taught me all the essentials of bat trapping and handling. It was clear that we were gathering quality data and there would be many ways to analyse and potentially publish it. I felt confident that not only would I be able to produce a good dissertation from my results, but that I was learning valuable skills to call upon for a long time to come. I was given responsibilities above and beyond my own thesis – I was teaching and leading volunteers, assisting with other species surveys, and generally helping the camps to run smoothly. I picked up basic Indonesian quickly, something I never expected, due to working closely with experienced local guides and living with a welcoming Indonesian family. 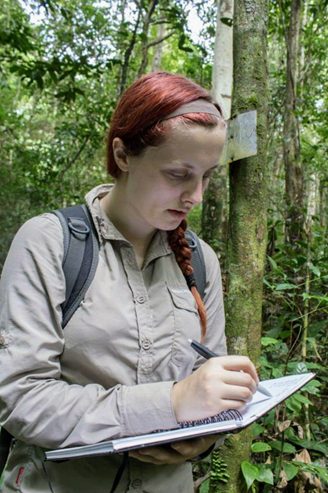 Livvy collecting habitat data for each of her trapping sites in Kakenauwe forest.

In 2015, I was asked to rejoin the Bat Scientists team. We tackled new sites, found more species, and taught more students through fieldwork and lectures. It was tough work but there was some “play” too – we got to spend Idul Fitri (the celebration that marks the end of Ramadan) in the village of Labundo-bundo, an incredible experience. I missed my graduation to spend the whole summer in Buton, which was quickly starting to feel like my second home, and even received my final degree results there – it was a First Class! I felt the achievement was made possible with the support of my Operation Wallacea colleagues. 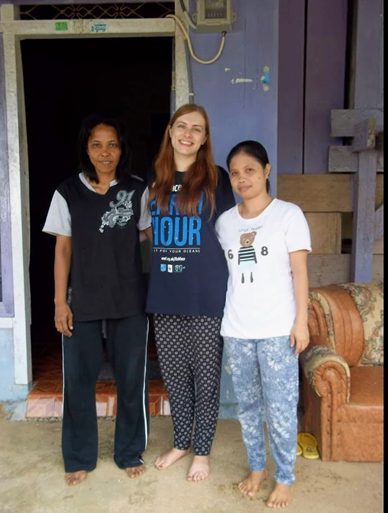 Livvy in Labundo-bundo with her hosts, Yanti and Itha.

After the culmination of the 2014 and 2015 expeditions, our results were formally published in open-source journals in early 2018. By that point, I had also been working full-time at Arup for several years as a UK-based Bat Ecologist. My colleagues at Arup saw the value of the work I had done with Operation Wallacea and were supportive of me returning to the region to continue our research. In summer 2018, I returned to Buton island once again.

This time our main aim was to investigate some potential cryptic bats (species which visually appear indistinguishable but may actually be two or more separate species). Finding enough individuals to examine and create a robust sample for our comparisons meant exploring locations that had never been surveyed by scientists before! The prospect of such remote sites was a little daunting, but extremely exciting. 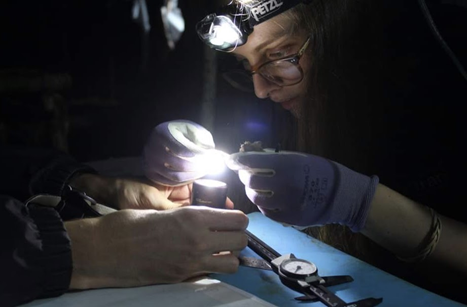 Livvy holding a bat to examine its wings, whilst a volunteer shines a torch from below. Please note – only experienced people should handle bats. Livvy is wearing gloves on both hands to protect herself and the bat. Since 2020, it is now also recommended that face coverings are worn where possible.

I joined the “mobile camp” which had one member of staff from each species team. It was hard work getting to our sites and surveys were sometimes impacted by heavy rain. However, it quickly became well worth the effort. For example, I came face-to-face with a Sulawesi Flying Fox (Acerodon celebensis). This species is threatened with extinction due to poaching, and was suspected on Buton but hadn’t been formally recorded in over a decade. Finding evidence that these remote forests could be one of the final strongholds for this beautiful animal is something I will never forget. 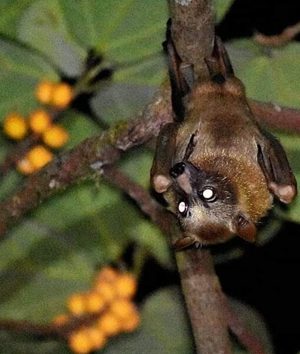 We eventually published this record (and all of our 2018 results) in open-source journals and photographic guides in 2021. I hope to return to the region and continue this extremely worthwhile work soon. I can’t wait to get stuck in once again, learning and sharing more about the diversity of this very special place, in the hopes that it can be safeguarded. 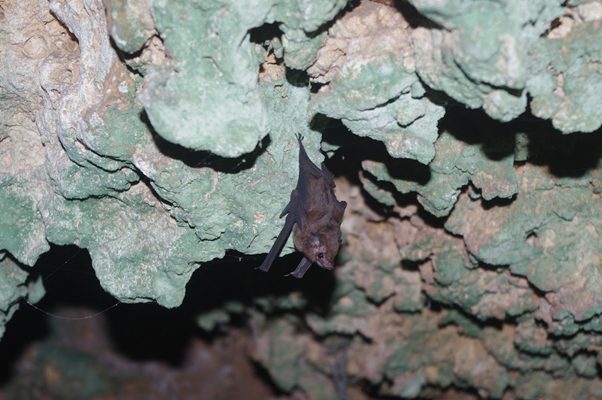 Lesser sheath-tailed bat (Emballonura monticola), one of the cryptic species found on Buton island, resting on coral rock in a cave near Labundo-bundo.