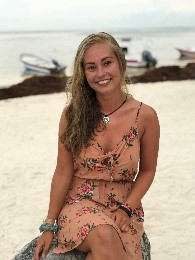 I am a BSc Geography student at the University of Birmingham, passionate about marine conservation. After working with Loggerhead Sea Turtle (C. caretta) hatchlings in Kefalonia last summer, I have been fortunate enough to gain a six week placement with Operation Wallacea to carry out research for my dissertation into the abundance and distribution of the seagrass species within Akumal Bay, Mexico.

Not surprisingly, over the past decade Akumal has experienced an ever-growing influx of tourists eager to ‘swim with turtles’ and snorkel amongst the rich marine ecosystem. However, the sheer volume of visitors to the area soon became a serious issue for the future health of the biological community. Unregulated snorkel tours meant that the resident sea turtles experienced high levels of stress whilst their feeding grounds, the seagrass meadows, were torn apart by the snorkeller’s fins.

Hard work carried out by the scientific community, with firm support from Operation Wallacea, meant that by June 2017 the bay was designated as part of the Caribbean Biosphere Reserve. Now, tourism is permitted but strictly regulated, with tour guides only permitted to take out six visitors at one time. The presence of two large refuge zones also provides the sea turtles with space to graze, away from the potentially kicking and touching tourists. There is hope that this will reduce cortisol levels amongst the resident population thus preventing rapid growth of the Fibropapillomatosis (FP) Virus (see image below). The FP virus is indicated by the presence of tumours which emanate from stressful and polluted conditions, and can be fatal for the turtles if left untreated. The space is also expected to allow for a recovery in the abundance of the three seagrass populations. 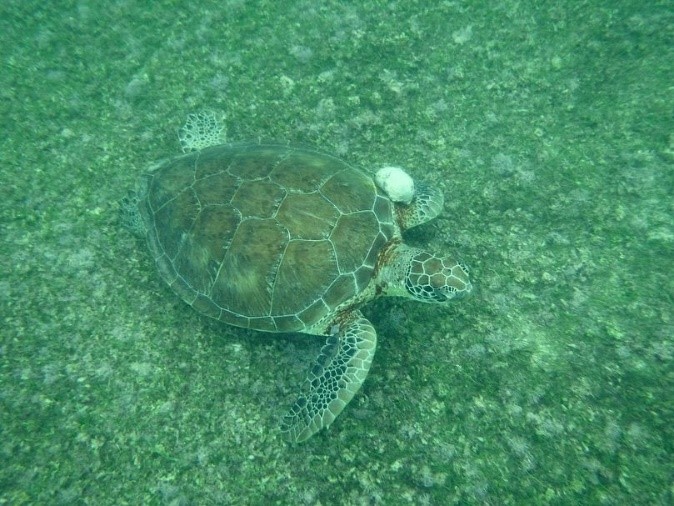 Akumal is a special case to consider. The conservation of the marine community within the bay is not just an environmental issue, but a socio-economic one too. A great number of the local population relies heavily on the vacation industry, with the largest attraction being the marine life. However, the Green Sea Turtle is now endangered whilst seagrass, a vital ecosystem service provider, is vulnerable to a number of threats such as sargassum influxes, macroalgae mats triggered by pollution and eutrophication within the Caribbean Sea. Thus, a fine balance is key – where the locals can maintain a steady income, tourists can enjoy the biodiversity Akumal has to offer and nature can be left as undisturbed and protected as possible. All efforts to conserve the bay need to be sustainable and consider this multitude of dynamics. 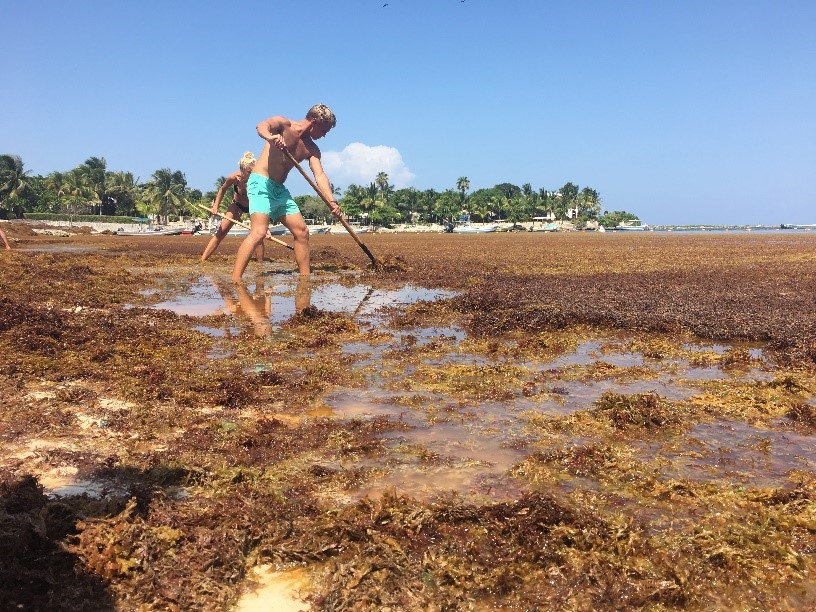 (Above) A Team Sargassum clean-up. As you can see, the sargassum mat is extending approximately 80m to sea. This is suffocating the entire marine community and blocking out light for photosynthetic organisms. The high levels of nutrients are leading to high epiphyte abundance, making seagrass less suitable for turtle grazing. It is a major threat to the entire bay, including tourism.

This summer, a group of eight Operation Wallacea team members have focused their research on determining the success of the Marine Protected Area (MPA) within the bay, for both the number and health of the resident sea turtles and the distribution and health of the three local seagrass species that they graze.

Every day consists of three turtle behaviour sessions, with each session involving two researchers recording 20 minutes of behaviour for at least four different resident turtles. Behaviour includes feeding (and the seagrass they are feeding on), surfacing for air and diving back to feed, swim or rest. The daily behaviour sessions are alternately 07:00-09:00, 11:00-13:00 and 15:00-17:00 / 09:00-11:00, 13:00-15:00 and 17:00-19:00 to ensure a 12-hour data set across every 48 hours. Tourist behaviour and any interaction with the turtles is also recorded, for example if the tourists are crowding a turtle. Behaviour responses can then be analysed. All of this data can be compared temporally with results from previous years, as well as for the same turtle across previous years. Turtle identification is also carried out by the researchers, with some team members focusing their projects on the immigration and emigration of new and old resident turtles.

Seagrass data collection in the bay consists of 165 quadrats across a number of transects perpendicular to shore. The Braun Blanquet method is used to estimate the percentage cover of each species of seagrass within the quadrat. Epiphytic coverage and maximum blade height is also recorded per species in order to determine the relative health of the seagrass that is actually present – and whether it is suitable and nutritious for turtle consumption. A taller, more epiphytic blade firstly requires energy to scrape off the epiphytes and is likely to have a higher lignin content which makes the seagrass harder for a turtle to digest. Furthermore, whilst T.testudnium (largely referred to as ‘turtle grass’) is favoured by the Green Sea Turtle, feeding preferences within Akumal may have changed with depletion in seagrass condition.

My personal thesis is to investigate all changes to the abundance, distribution, health and grazing of the three seagrass species over the past 10 years. This will involve a number of maps being produced using Geographical Information Systems to allow for geostatistical analyses. This visual representation of the data aims to present to the local authorities a picture of the current seagrass condition and will indicate management solutions which could be implemented, for example the trimming of seagrass to lower lignin content. This will improve seagrass health and boost the nutrition that the turtles are receiving. If the seagrass is left to deplete, the turtles will move to feeding grounds elsewhere, and the beach will be significantly eroded. It is key to prevent these cascading events from happening

Overall, it is incredibly exciting to see the impact that scientific research can have on maintaining biodiversity. With the data collected by Operation Wallacea this year, the management plan for the MPA can be adjusted to further protect the resident sea turtles and seagrass populations. Shielding nature from human degradation is becoming a much more recognised issue, and seeing an international community come together to help is incredibly inspiring. I will never forget seeing young and old tourists, local dive staff and scientists collectively removing the sargassum from the beach. Together, they were protecting the beauty of Akumal Bay for all to enjoy – marine life, locals and tourists alike.

(Above) Team Turtle and Seagrass. The most passionate, inspiring group of people that I have ever had the chance to work alongside. Hopefully we helped to make a difference!

Visit https://www.opwall.com/location/mexico/akumal/ to find out more!