For the last 5 years Operation Wallacea has been operating in a small coastal town called Akumal that consists of extensive reefs, mangroves, lagoons, beaches with a high density of nesting sea turtles, and in one particular bay; abundant seagrasses and a large (60+) resident population of immature green turtles. As all species of sea turtle are listed by the IUCN as endangered species, Akumal is an important place for marine conservation. Sustainable tourism in coastal areas can provide an alternative income for local communities to combat problems with over fishing on reefs, but if tourism gets out of hand then it can bring its own set of problems including water contamination, destruction of important habitats and chronic stress for wildlife that are the focus snorkel or dive tours.

Since the start of the project we have seen a massive increase in tourism in Akumal, primarily due to people taking day trips to snorkel with the turtles in Akumal bay. With no proper regulation, the increase in tourism has resulted in water contamination from sunblock, insect repellent and people peeing in the bay and tourists have repeatedly chased, touched and harassed the turtles. Since the increase in snorkel tours we have recorded significant damage to the seagrass habitat and a notable decline in the health of the turtles. Many individuals are showing early signs of Fibropapillomatosis (FP), symptoms of which are cutaneous tumours develop around the face and body that impede vision and movement, and in roughly 30% of cases, tumours on internal organs which result in death.  As FB is associated with water contamination and chronic stress, it is pretty obvious that the tourism is slowly killing the turtles and destroying their habitat. 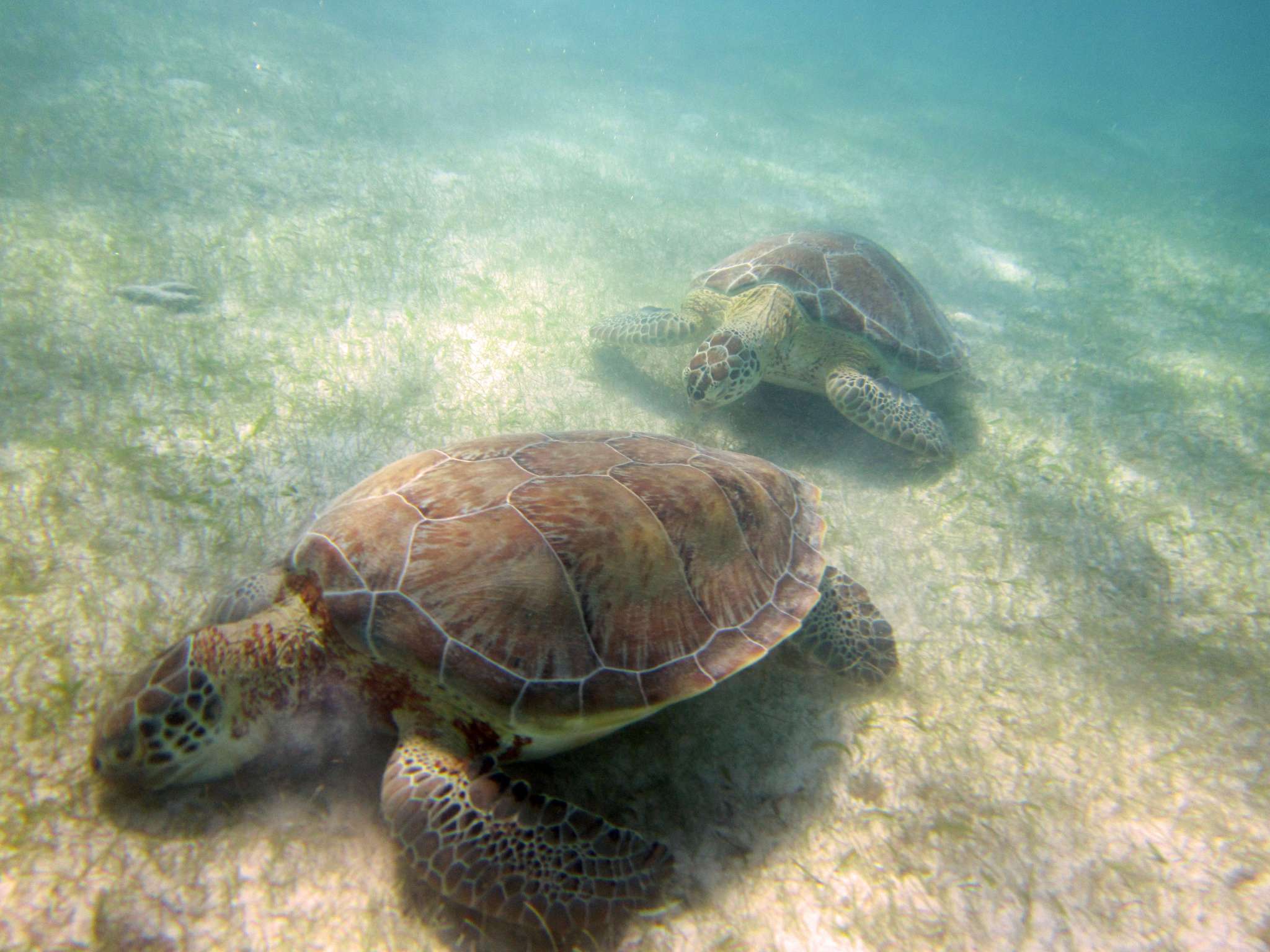 As green turtles are an endangered species projected by federal and international law, the impact of tourism on the turtles in Akumal has become a major concern for the Mexican government, local NGOs and Akumal residents. In 2013 we developed a long-term monitoring project of the impact of tourism on sea turtle behaviour, seagrass habitats and water quality in conjunction with Akumal Dive Centre and Centro Ecologico Akumal.  In 2014 we presented the results of our turtle behavioural dissertation projects to the authorities and they were shocked to hear that each turtle was being grabbed by tourists on average 4 times an hour, every hour, 7 days a week. Since then we have repeatedly reported indicators of chronic stress in the turtles caused by harassment from tourists, along with data relating to the causes and consequences of water contamination in the bay, and availability of seagrasses in the general area (there are none outside Akumal Bay). Finally, in March 2016 the department of protected areas (CONANP) announced that Akumal was to be made into a protected area in order to restrict tourism and allow recovery of the ecosystem. For the last year we have been to multiple planning meetings campaigning for a turtle only zone in the bay where the turtles can feed without harassment from tourists, and for tourists to have access to toilets and showers before entering the water to address the contamination issues. After a series of presentations and written reports, our data was eventually used as the basis for the management plan. 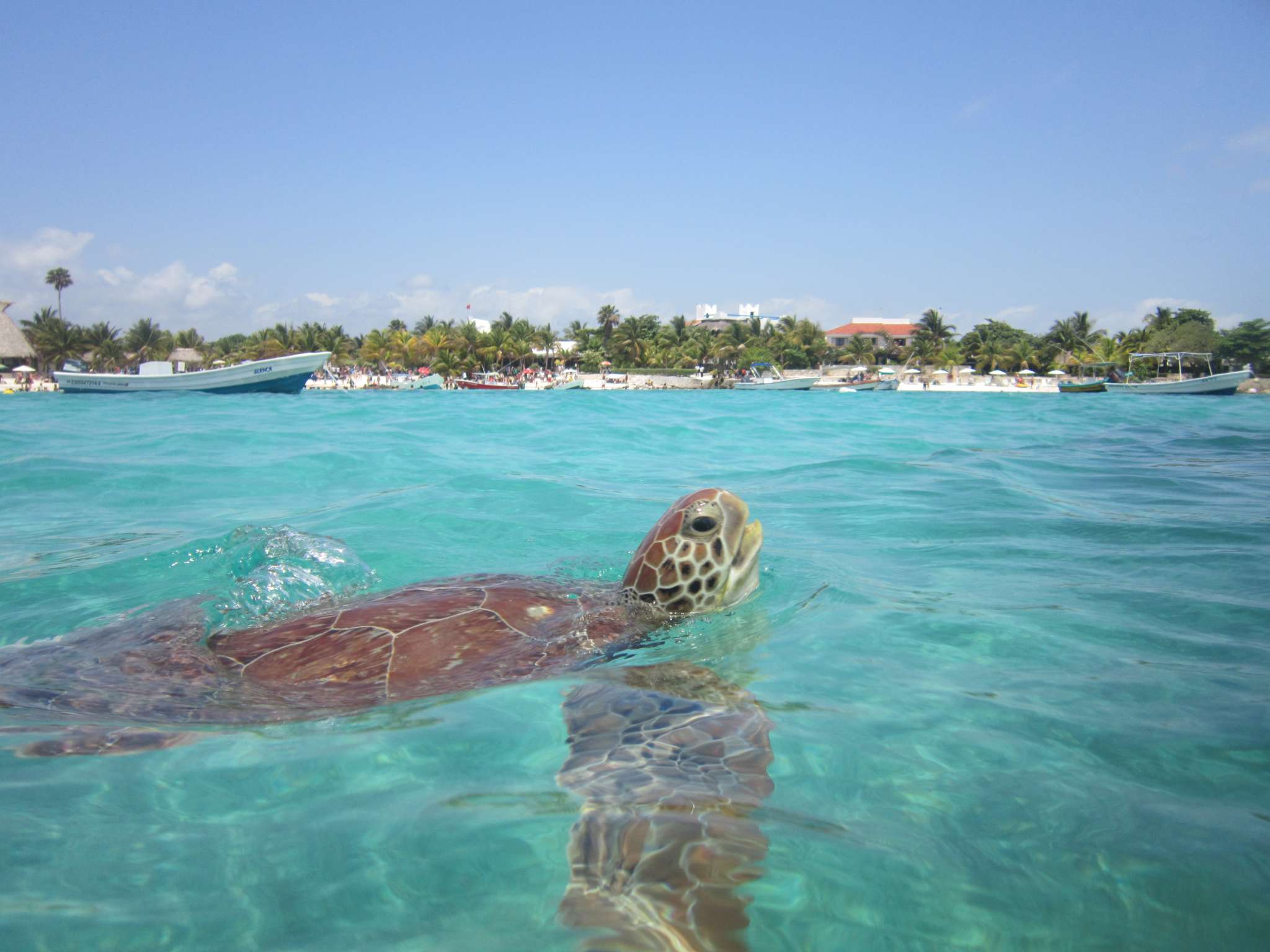 It has been a very long road, and there is still a lot of work to do, but we are pleased to announce that Akumal is now a marine protected area, what was once the snorkel area in Akumal Bay is now turtles only and there is a complete ban on snorkel with turtle tours for the immediate future to give the turtles and seagrasses time to recover. Permits have been given to CONANP to build public showers and toilets on the beach complete with biodigestors and they will be built within the next few months. Sustainable snorkel tours will be reintroduced in a designated circuit through one section of the turtle zone, in groups of 6 people or less, accompanied by one of the CONANP certified tour guides, providing income for local people, while maintaining a safe refuge for the turtles.

Of course many of the tour operators are fighting hard against the temporary ban on snorkel tours and there is still a lot of work to do on the management plan in relation to tourism carrying capacity and ongoing monitoring of the impact of tourism on the ecosystem, but we are delighted that all the hard work put in by our research partners, staff and students has really made a positive change in Akumal and that the first major hurdle for creating a safe haven for the endangered turtles has been crossed.

On behalf of everyone at Operation Wallacea, we would like that say a huge thank you to everyone who has joined the Akumal research team over the years as it really has been a team effort!