Indonesia – The bird, the bat and the scorpion

Written by and Photos Courtesy of Melissa Donnelly

There was an amazing quiet creek on Transect 6 that I was desperate to survey. Finally, had the chance to go out there, but once I found the location, the entire thing had dried up! There were only a couple of pools left, one of them being perfect for a 6m net.

With me, we had our guide Darwin B, and the bat scientist from the mobile team, Georgina. After we set everything up, we stuck some ripe bananas in the triple high nets, hoping to attract some fruit bats.

While waiting between net checks, we’d go off searching for wildlife. The little pools were full of large shrimp and crayfish. We found a flying frog, saw a rat, and occasionally spotted a prawn migrating through the rock bed, hoping to make it to the next available pool. This readily available food supply attracted numerous civets to the area: most of the time you could see the incredibly bright eye shine creeping nearby.

It was finally time to check the net. As we approached I could see a bat, but immediately next to it all I could see was an iridescent purple/blue, orange/red conglomeration of colours. What was that rainbow in my net!? Upon closer inspection I saw it was a kingfisher. It was a very pretty bird; I took a couple of pictures, and then released it. 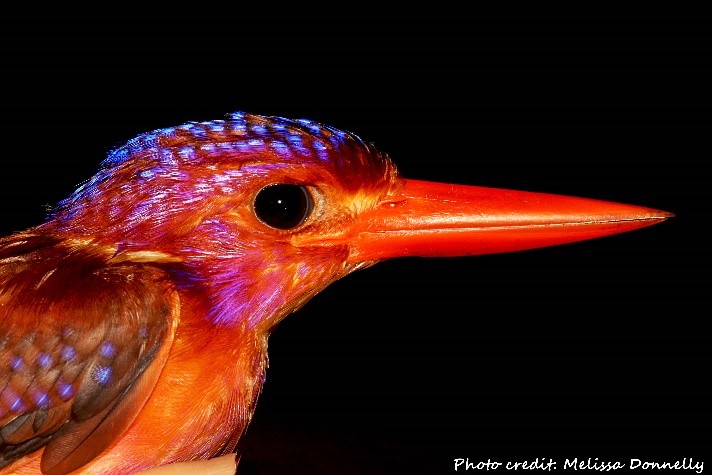 Next net check we see our triple high is full of butterflies and moths drawn in by our ripe bananas. Not quite the target I was looking for. We then had a running joke that this net was the kupu-kupu malam net [Kupu-kupu, Indonesian for butterfly, and malam: evening thus this must be the closest translation for moth, right?] This made our guide chuckle every time we mentioned this. All that effort setting up the triple high, only to catch moths.

Our other little net proved to be more successful in catching bats. George would extract and process while I scribed for her. We had just caught one, so we settled under our little rain shelter fashioned by my hammock (was so proud of my Jungle Skills), brushed some hair out of my face, and proceeded to start filling out the datasheets. As I went to write, my index finger started to throb. I inspected it, squeezed it, couldn’t see anything, and thought I had just imagined it. Almost instantly, the pain returned. It was almost similar to the sensation of touching stinging nettle. I remembered last touching my hair so I asked George, “Is there something in my hair?” She then looked at me funny and replied, “Uh, yeah… There is a small scorpion in your hair!!!” It had crawled onto the hammock we were using as a shelter from the rain, and then fallen onto my head… Jungle skills: Fail… 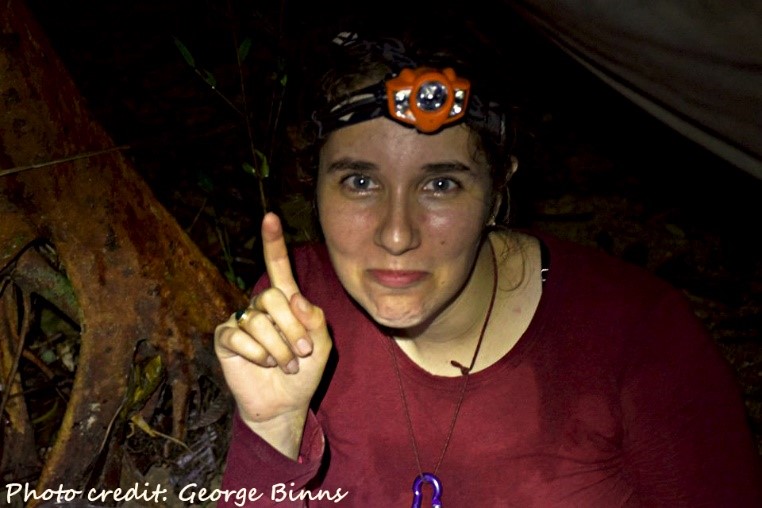 We removed it from my head, then proceeded to call the guide. I didn’t know how to say scorpion, so I pointed to the culprit then pointed to my finger while making a sad face. He understood. Being from Canada, I had no idea whether I would have an allergic reaction to scorpion venom. The guide thought about packing up our things and returning to camp, but besides the throbbing/ swelling fingertip, I felt fine. We were in a good spot, so I didn’t want to leave. We even caught a bat that smelled like curry! Just in case though, I showed everyone where the Epipen was located, and had him radio camp. We managed to get signal into camp, and were told that the camp manager, Steph, and the students were on their way with a red onion. I decided not to question that last bit… 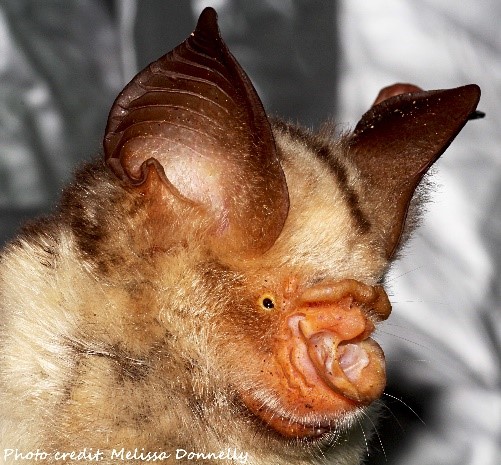 Forty minutes later, the students arrive just in time to see one of the largest insectivorous bats on Buton, Hipposideros diadema, be taken out of the net. Funny enough, it had been drawn to all the moths in our net, so our baiting worked!… Sort of…

My finger at that point was really swollen and mist net extraction was difficult. Steph gave me a little red onion/ shallot to put on my finger. She explained that it has the power to suck the scorpion venom out. I was skeptical, but may as well give it a shot. Ten minutes later, all the pain was gone! Who’d have known onions are the cure to scorpion venom!

Going back to the bird, I showed our ornithologist on site the picture, and he identified it as a Sulawesi Dwarf Kingfisher. Apparently, this is a bird many have wanted to see, including one of Opwall’s site operation facilitators. It wasn’t a bat, so I had no idea about the significance of this catch. 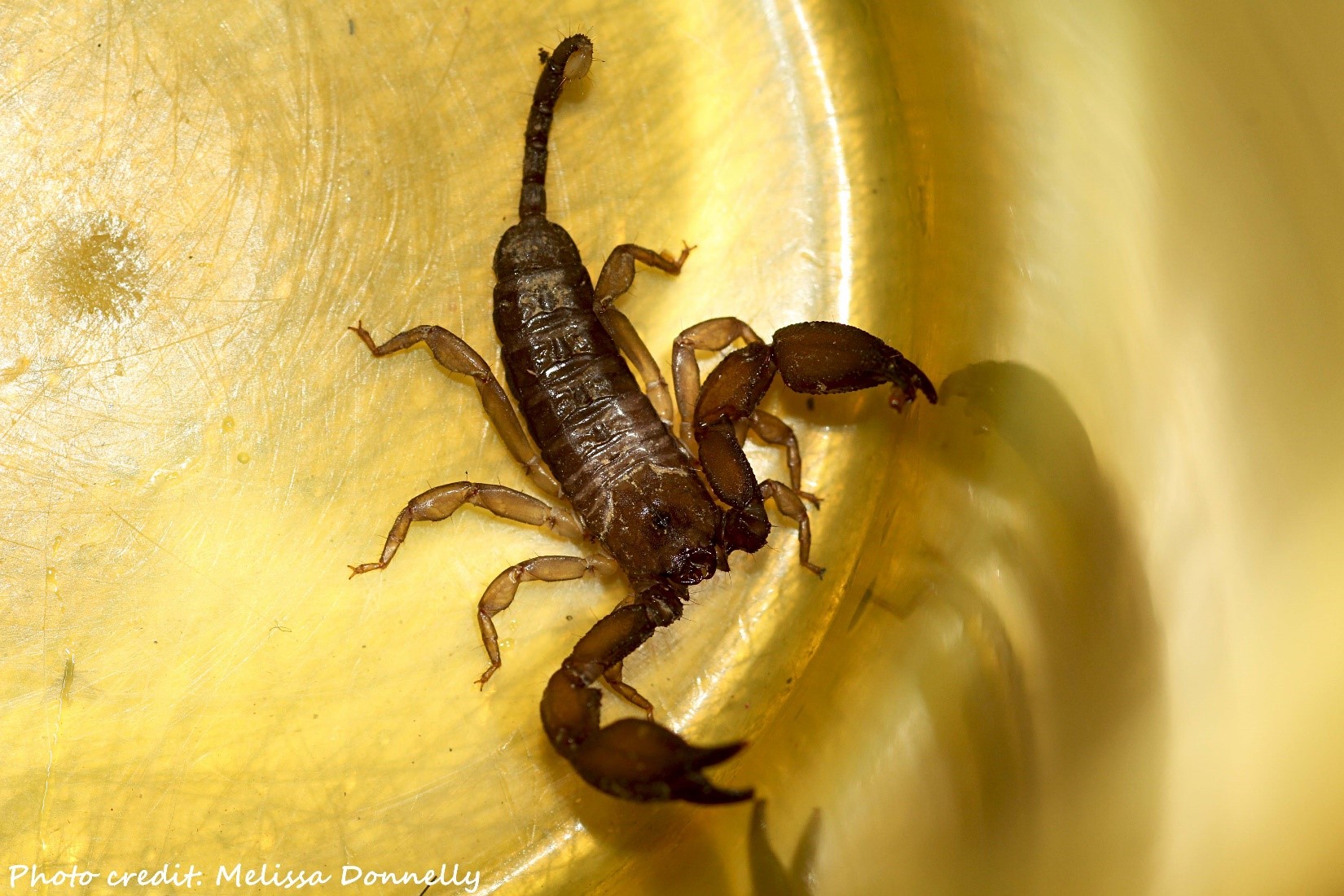