Opwall’s largest site, the biggest numbers we have ever had, 6 forest camps to run – surely there is no more time for our Indonesia management team to spare in the season? That was until Milo came along. Early in the season our Indonesia country manager Hannah happened across a helpless dog not far from our South base, Labundo village. Skinny, scared and obviously very unwell, he approached Hannah for help. He was missing part of his back leg – the most likely explanation was that he was caught in a snare trap and had to gnaw his leg off to get free. A little bit of food settled him and made him more comfortable, and that is the last we thought we would see of him. That was until he turned up in Labundo looking for a caring hand. 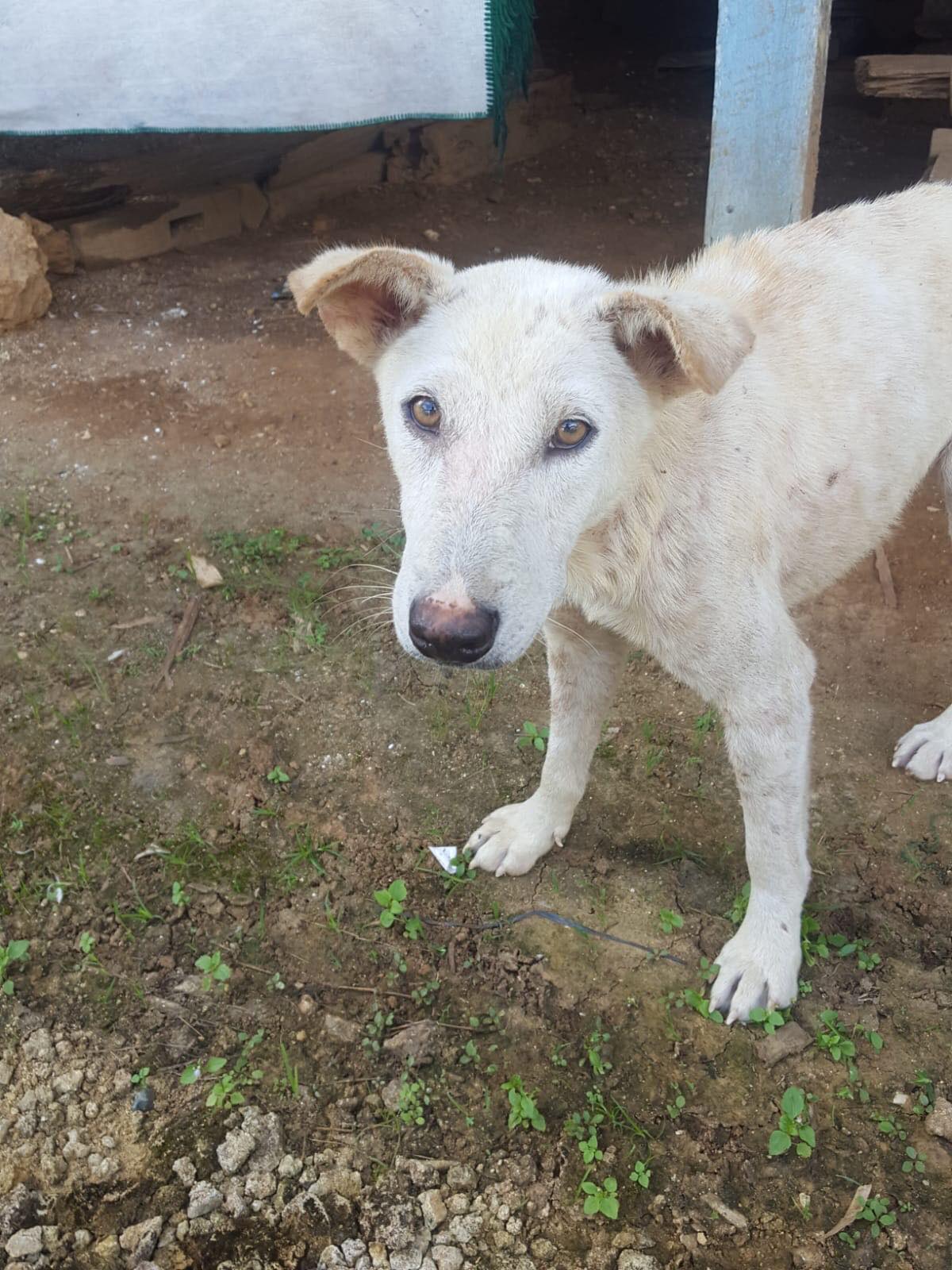 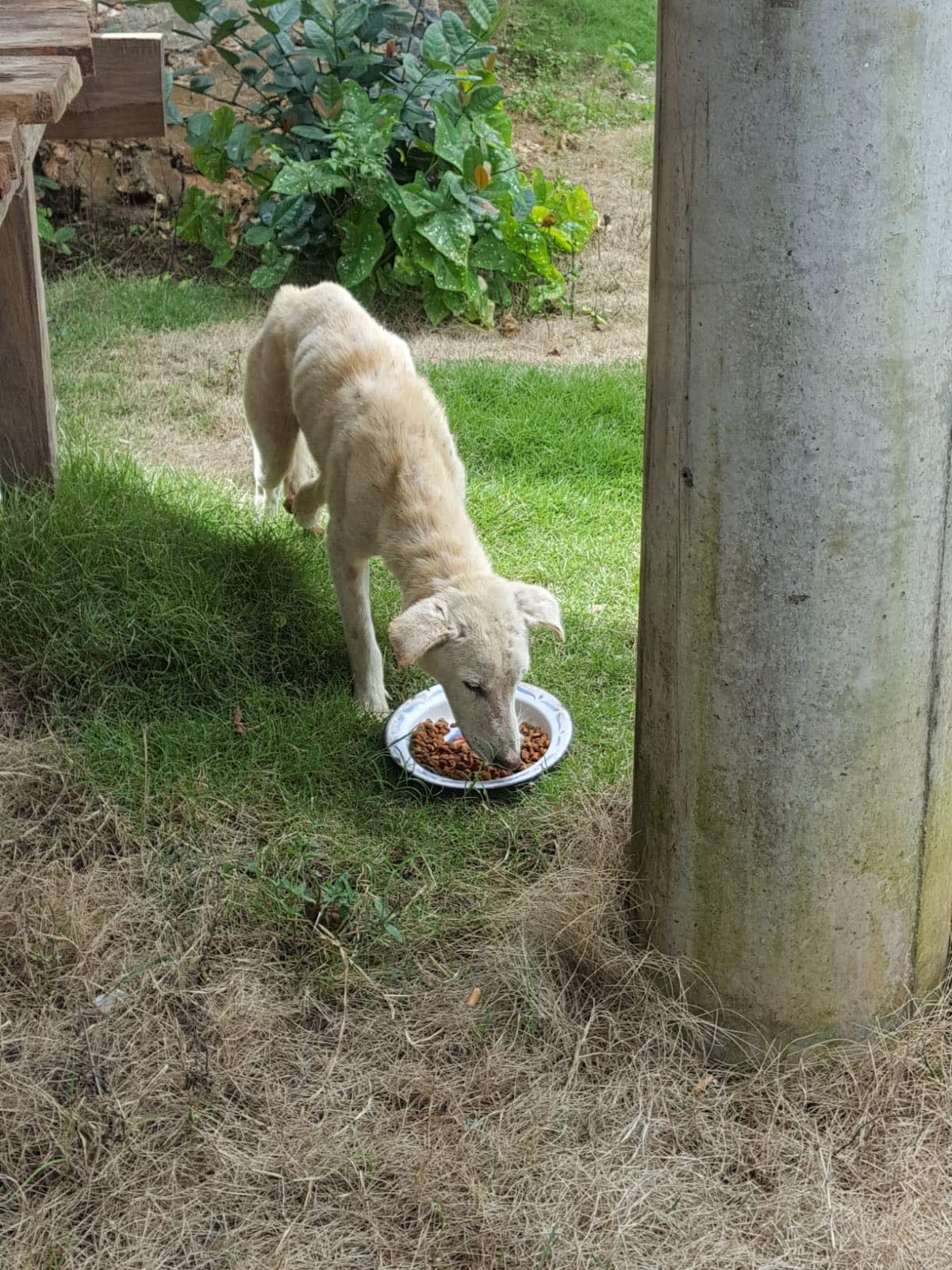 I was out in camp when I heard the news of Hannah helping Milo (known at the time as Fluffer or Doggo, depending on who you asked). This didn’t come as a huge shock as last year she had rescued a kitten who had lost his mother (who now lives in the office in Labundo), so it was only a matter of time! When I returned from camp a few days later I saw Milo for myself and I wasn’t hopeful for his survival. The wound on his leg looked susceptible to infection and his whole demeanour told us that he wasn’t doing well. After consulting vets from the UK and within Indonesia we rounded up all of our personal medication and started him on painkillers and antibiotics. The best way to do this is to mush up the tablets in some chicken or fish – a barrier our vegetarian helpers had to cross! 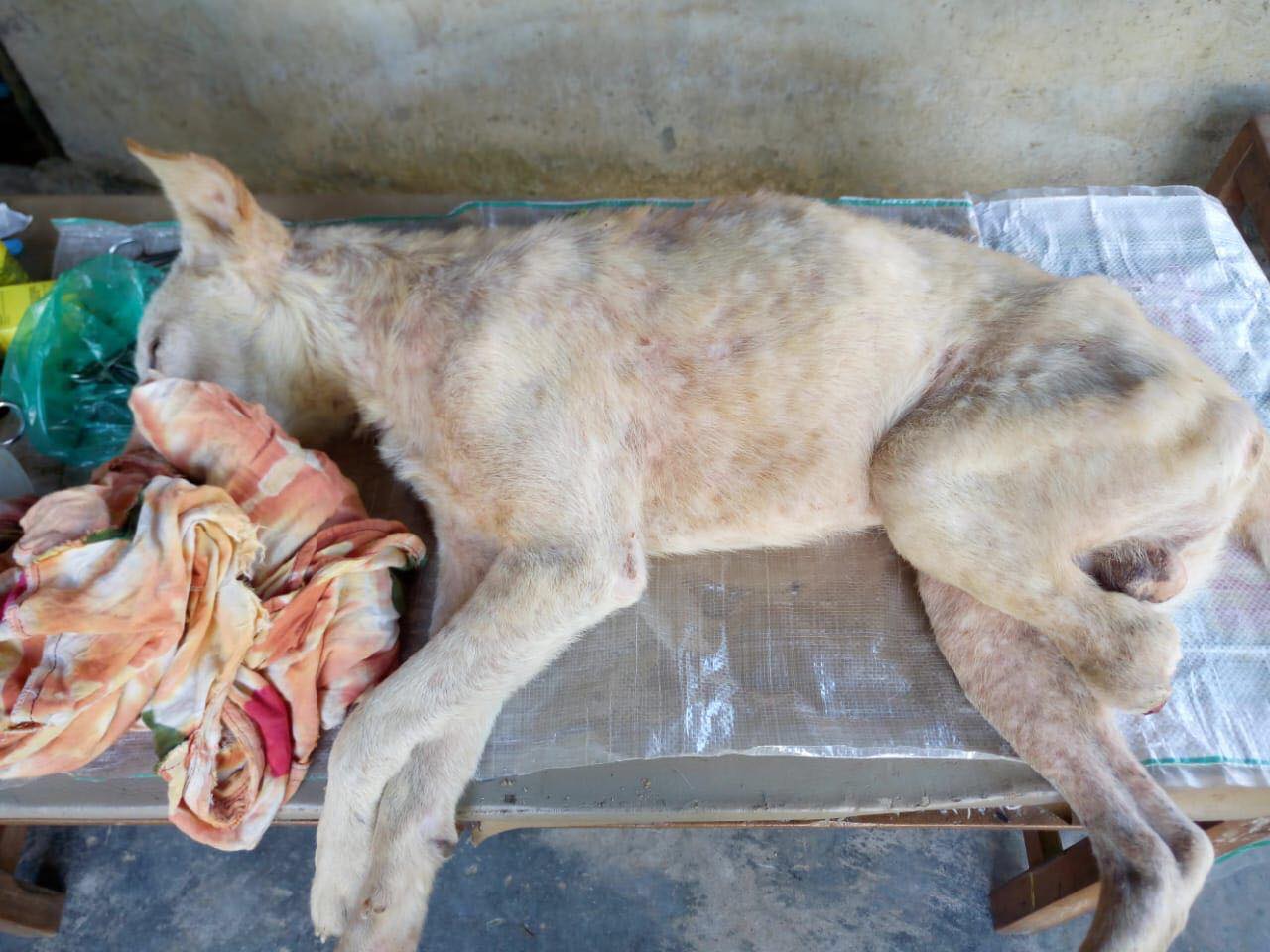 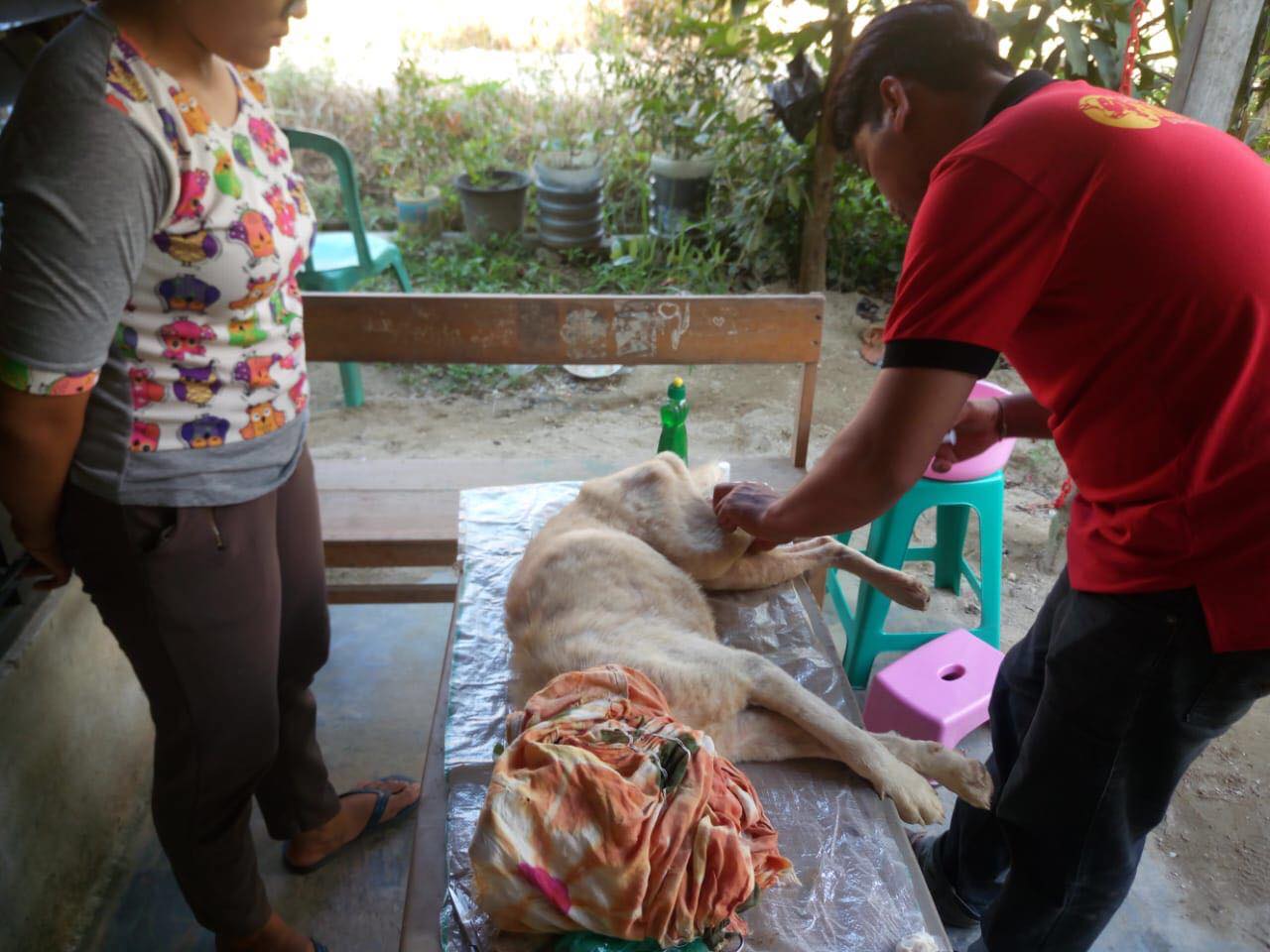 All of this was done under the bewilderment of our Indonesian counter parts. Dogs typically aren’t kept as pets in Indonesia, particularly in the majority Muslim areas, so are largely ignored by the local people. A couple of bules (westerners) feeding and cooing after a dog was quite the sight for them!

As the weeks went on we saw Milo steadily getting stronger and stronger, to the point where he was running around the village trying to keep up with the other village dogs! We knew he would make it so we had to decide what to do. After extensive internet searches into the logistics of getting a street dog back to the UK (with awful mobile signal…) we realised it would not be possible to take him home with us, so we had to look at other options. We could leave him in Labundo but we weren’t sure if he would thrive as a street dog. Then an idea popped into our heads…what about Arthur?! Arthur is one of our long term Indonesian scientists from Kendari – only a short ferry ride away – who already has a dog. Amazingly Arthur agreed to take Milo, without even meeting him! Once Arthur arrived back in Labundo from our Central camp they had a chance to meet, and Arthur’s commitment to Milo was solidified. The next job was to plan a way to get Milo to Arthur’s house. A crate was specially made, a driver hired to take him to Kendari, and Arthur’s vet was contacted to organise Milo’s surgery. We had two weeks to get him used to his crate, and most importantly raise the money we needed! By telling his story to our volunteers they were generous enough to donate their left-over cash at the end of the week, meaning within two weeks we had raised the full amount we needed. This money has been used to build a crate, for the transport to Kendari, vet treatments, and the remainder has been given to Arthur to cover the cost of food and ongoing vets bills. Our students in the last week also had a competition to choose his name – Milo was a clear winner, named after our students’ favourite chocolatey drink, and evening treat in camp! 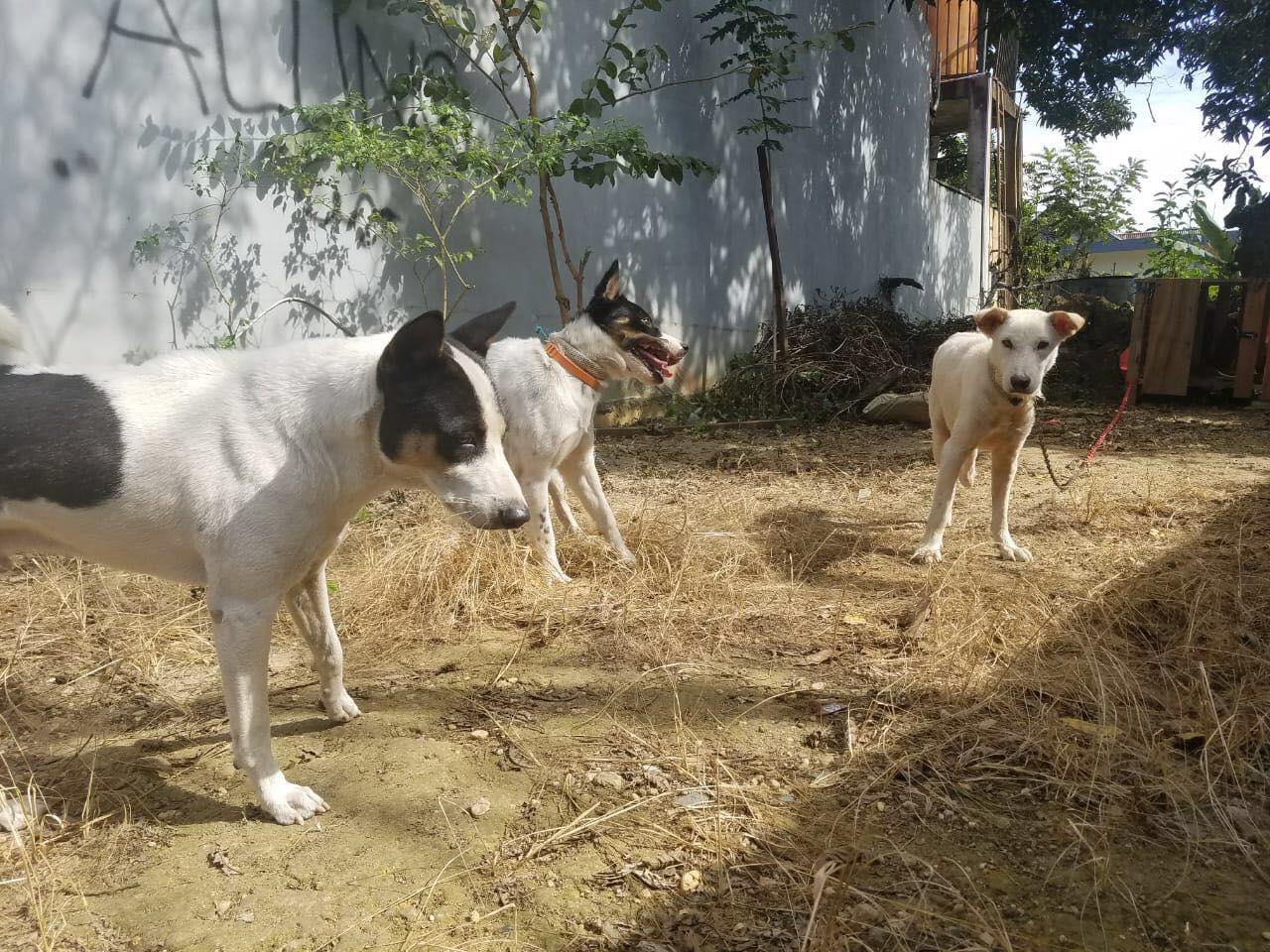 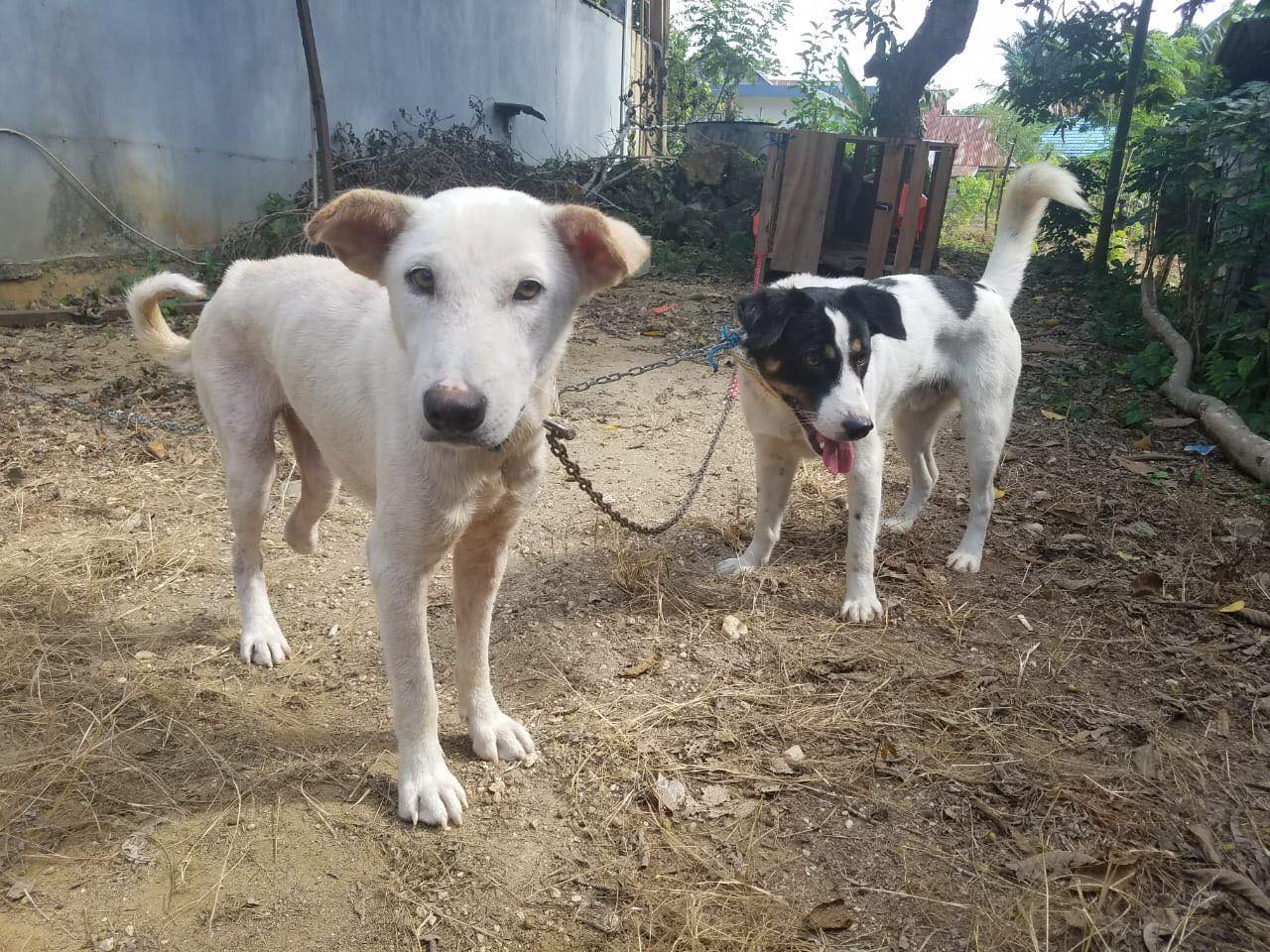 Leaving day arrived and Hannah and I woke up at 2.30am to see Milo off to his new home. We hadn’t been able to touch him for the whole 6 weeks as he was too nervous, although as he was leaving he allowed us to gently stroke his nose and the top of his head. It was at that point that we knew he completely trusted us and we knew we had made the right decision.

Once arriving in Kendari the vet looked over him and decided that he doesn’t need surgery as his leg is healing well, but he has been castrated and is undergoing treatment for a skin disease. Now Milo is happily in Kendari with Arthur and his family, living the life of luxury!

We would like to thank Ratna, Darwis, Idin, Puput and everyone else who helped to look after and feed Milo whilst Hannah and I were in camp. Also a HUGE thank you to all of our students and staff who donated to Milo’s cause. Without all of you we really couldn’t have given him the life he deserves. And of course, the biggest thanks goes to Arthur and his family for happily but unexpectedly ending the season with another member of the family. 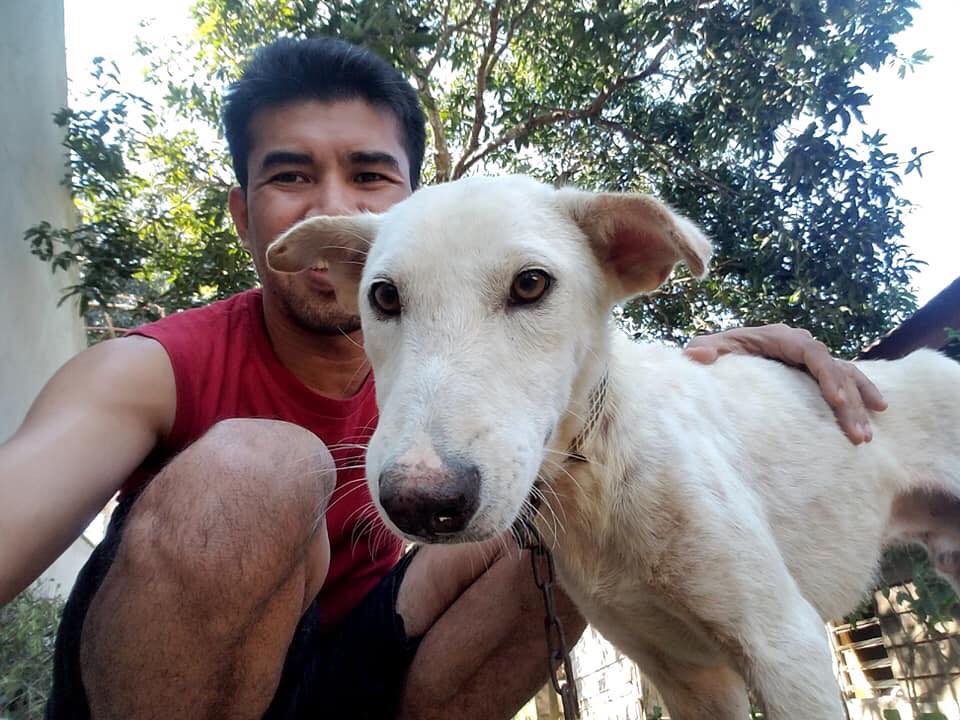