Written by and Photos Courtesy of Melissa Donnelly

This is my first time in Indonesia, and I cannot wait to start looking for bats. I have mostly worked in Latin America and the Caribbean, and up until now have had very little experience in the Old World. The families of bats there are vastly different from what I had previously encountered. This made this trip that much more exciting. 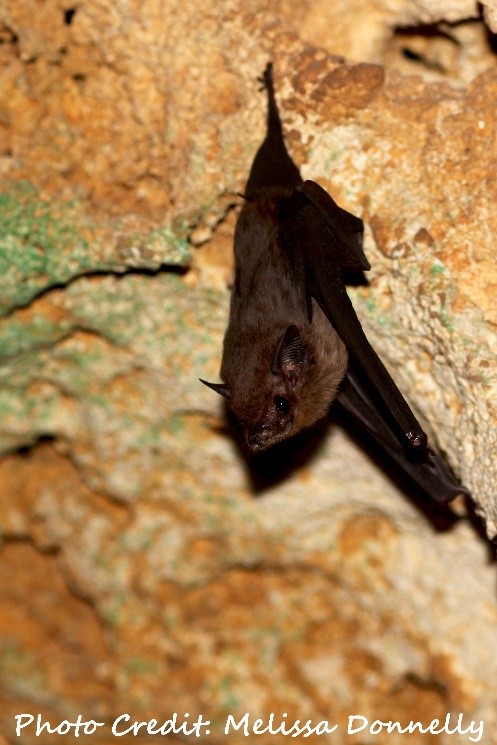 We spent the first week in the village of Labundo getting to know the other scientists, and completing our pre-season training. Our first week, the rain was relentless; this made night surveys almost impossible. Luckily, there was a bat cave nearby, so I was able to take shelter and collect data on that species (Lesser Sheath Tailed Bat).

One morning, the lead of the mobile team (Joe), described to me some bats he found, “Bats with long ears that looked similar to UK’s Northern Long Eared bat.” Instantly, only one species comes to mind. I become very excited because this was a species not currently reported by Opwall: Megaderma spasma (Lesser False Vampire Bat).

The senior scientist, Tom, was just as psyched, and moments later we made our way to the abandoned house with my hand net. I brought backup with me. This particular species is very maneuverable and the only way to catch them is to seal their exit.

I explained to the team that they needed to block the doorway with my poncho to keep them from escaping. I entered the tiny room, confirmed the species ID, and attempted to catch the pair. Unfortunately, there was a 2 inch gap between the poncho and the doorway, so they easily made their escape. I felt as though I had missed my opportunity. I kept replaying that day over and over asking myself, “What could I have done differently to change the outcome?”

The next day Tom and Samsudin (local bat expert) took me out to another cave. When we get there the first species I see is again Megaderma. I feel like I have a chance at redeeming myself! There was a colony of about 10. I grabbed my hand net, and that’s when my hand-eye coordination failed me. All I managed to do was smack the wall and alert all the individuals to my presence. The colony spooked, and dispersed into the unknown depths of the cave. 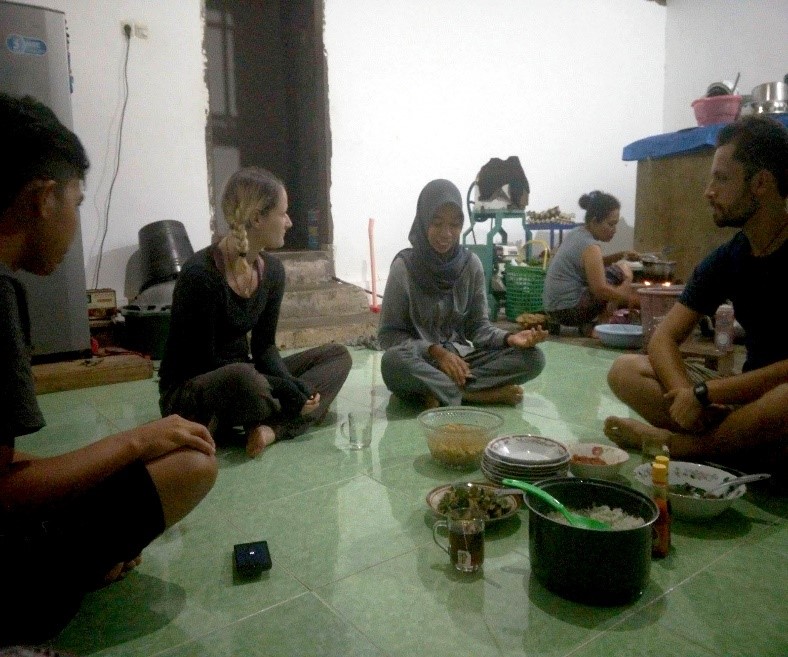 Our training week ended and I was sent to Anoa camp in the North. We arrived a day late because the rain had made the rivers impassible, so we spend the night at the village chief’s house in Waodeburi. This meant I would not get the chance to scope out net sites before the students arrived, so over the next several days I marked waypoints on the GPS while out on survey with other scientists. That particular day I had tagged along with the herpetology project on Transect 1. This was the transect everyone had mentioned the cave was located at, so I had to check it out. What I didn’t realize was in order to reach the start of Transect 1 we had to hike 1km on a virtually vertical/ steep muddy/ rocky trail lined with ropes to keep you from falling off the edge. There were a total of five rest stops along this hike. It was quite the workout, and I felt great and accomplished after we made it to the top.

As we walked the trail, I noticed a GIANT 40m long fallen tree with a hollow of about 2m diameter. Naturally, I needed to check it for bats. I shined my light and saw flight in the distance. I then proceeded to enter the hollow, while silently praying I wouldn’t encounter a king cobra, skin mites, stinging insects like ants, scorpions and centipedes, or just fall through the log. I wanted to get close enough to ID the bats, but not close enough to spook them out of the roost. They were Megaderma spasma!!! I backpedalled out of there, and knew exactly what I had to do to catch them. Unfortunately, in order to execute that plan, I needed my gear, which was all the way down the hill. Not only that, I would need to find a guide to bring me back up there, along with 2 non-student volunteers to help with my plan. This could not wait until the next day because there was a good chance they would not be there.

I explained to the camp manager, Steph, that this was a special species, and that I wouldn’t be asking to do this for every single bat roost I found. She was fine with it and assigned Jaka to accompany me back up the hill that afternoon. I also managed to snag the teachers from that week’s school group from the US, and teacher from an international school located in Thailand. 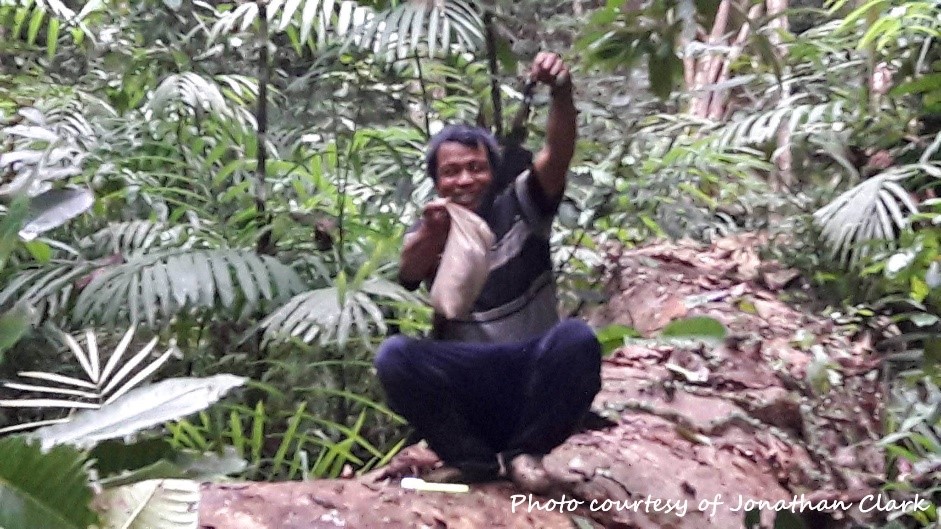 We hiked back up for the second time that day (after a ten minute lunch), and got to the hollow. I gave the teachers a mist net to hold over one of the hollow entrances and another to Jaka to block off the other end after I had crawled in with my hand net. 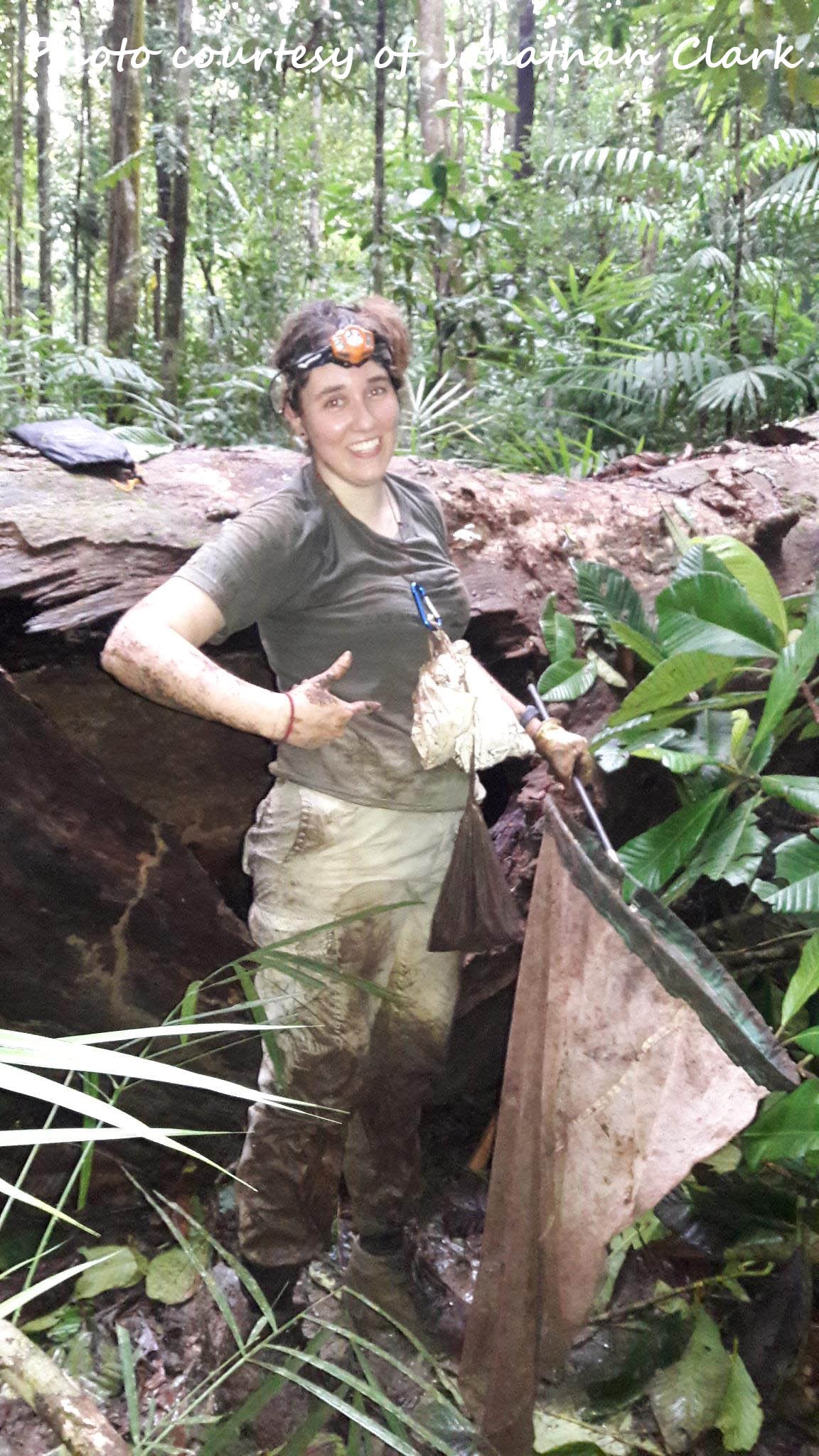 I do not know how many times I crawled back and forth through that hollow. Even with barely any space to get by, the bats were still able to get around me, often smacking me as they flew by. Occasionally, one would get caught in the mist net, but by the time I got there they would manage to get free. My knees were throbbing, 2/5 bats had managed to escape the log entirely. Finally, one of them smacked into my shoulder, and before it could take off I grabbed it and secured it in my holding bag. Shortly after, the remainders were caught.

Everybody was ecstatic! I was incredibly filthy (took about a week to wash all the dirt out of my hair), but finally I was able to get measurements needed to be able to report the species as a new finding. It took so much strategizing, but we finally caught them!!! 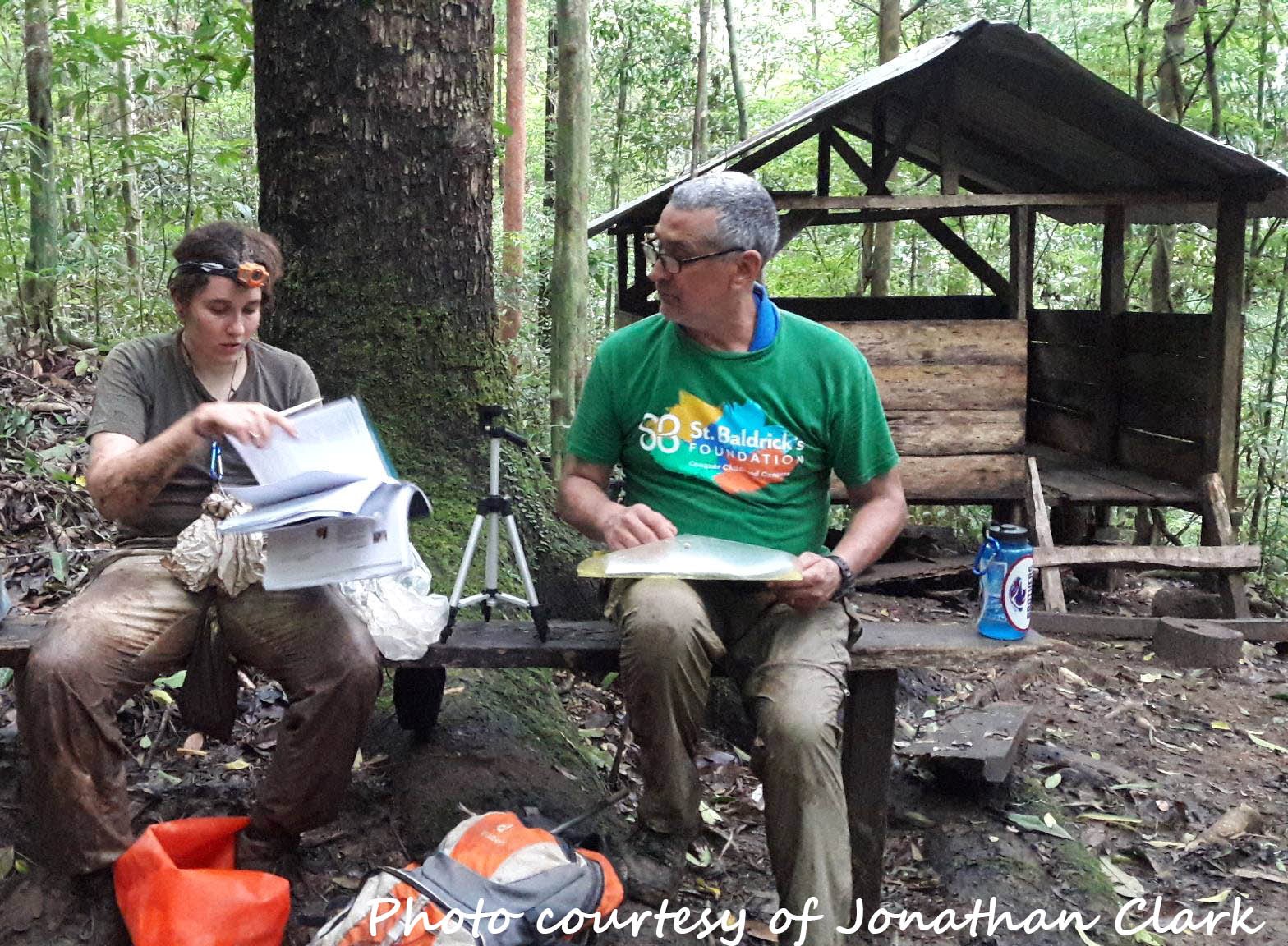 Finally, here is the beauty: 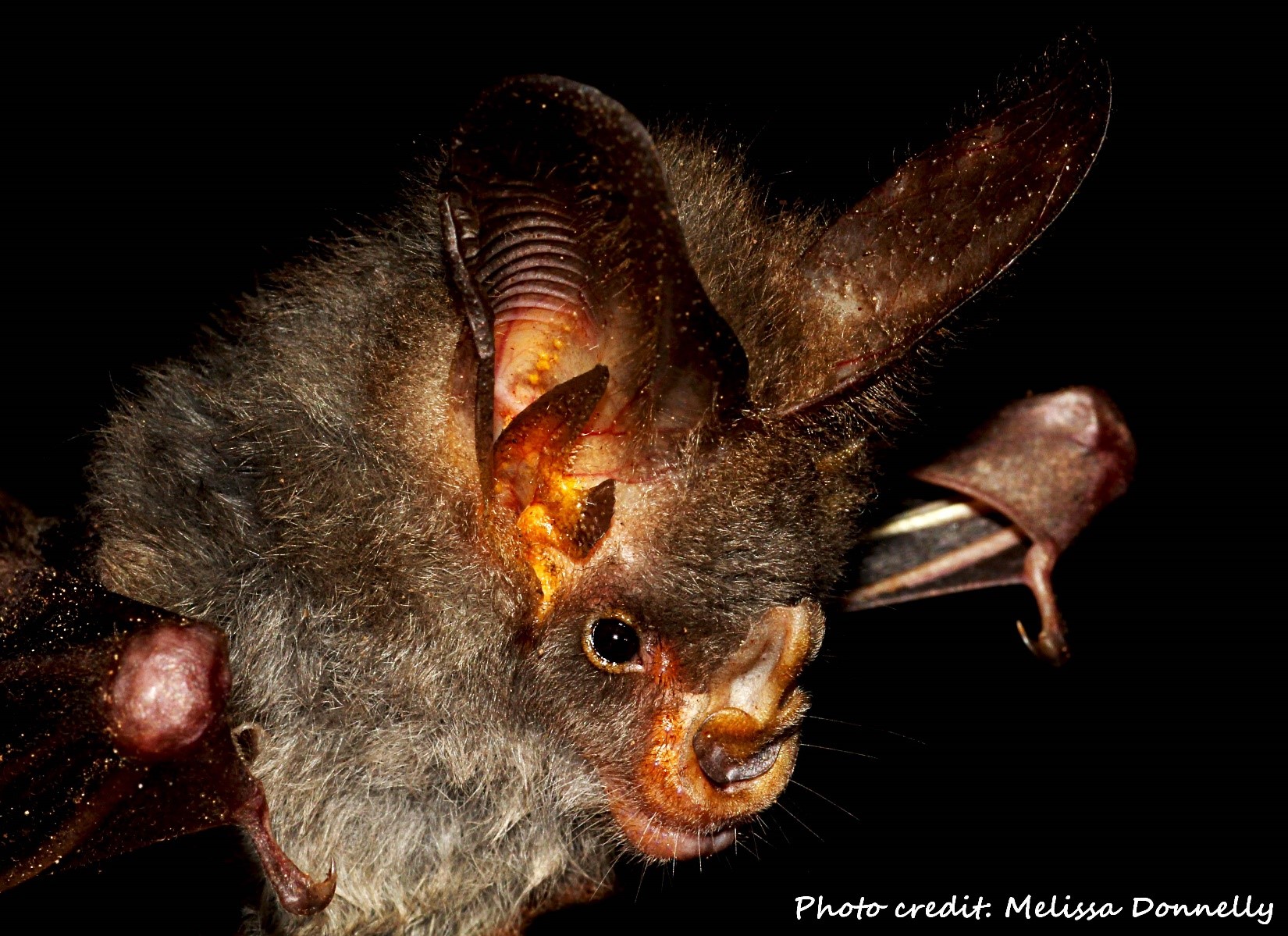 … Later that night, on the easy transect right next to camp, I caught a Megaderma in my mist net during my regular survey… bats are jerks.