Indonesia – A day in the life of an Opwall herpetologist

My day started like every other ecologist: asleep in hammock deep in the jungle at Bala camp. Only mine was slightly different as I was recovering from an operation on my face; a hair follicle became rapidly infected and transformed into an abscess within 24h of entering the research camp. I was in a deep rest attempting to recover when I was awoken by the camp’s ornithologist Joe. “Damo, Damo!” he cried. “Are you awake!? The Indonesian guides have run off into the jungle wielding parangs (machetes) screaming Ular (which is the local word for snake), I think it’s a big one!” At that last remark I stumbled out of my hammock, grabbed my shirt and we ran down the path following the mob of guides.

The path took us just 40 meters from the camp to a tree which had been felled for firewood. The open area was scattered with logs and provided a perfect basking spot for a large Reticulated Python digesting a fresh meal. The python lay in thick coils next to an exposed log, with a large bulge across its midsection. I approached the snake carefully from behind and it didn’t react to my presence except for a slight turn of the head and a couple of flicks of the tongue. The head was partially buried within its coils so it was much too dangerous for me to quickly grab behind the head. I turned to the horde of guides and called for a forked stick. Within 30 seconds guides armed with parangs had fashioned me a three foot pinning stick from a nearby sapling. I carefully approached the snake and gently wedged the fork of the stick behind the jaws of the pythons head. Once pinned I sprung my left hand onto the neck, knowing well if my placement and strength was not precise I would receive a handful of over 200 large hooked teeth. Instinctively Joe jumped in and grabbed the snake’s body before it began to constrict me. Once we had secured the body with the assistance of some guides, we walked the prize back to the camp to interrupt the students’ jungle training.

Reticulated pythons (Python reticulatus) are the longest python species in the world, occasionally growing over eight meters in length, and are the only python found on the Island of Buton. The individual we caught was a young’un and measured just over 3.5 meters. Interestingly the bulge in its belly was very similar in size and shape to the camp’s resident Malay Civet, which coincidentally was not seen for the last two nights before the python was detected. Retic’s have an excellent sense of smell (technically taste as they sample the air with their tongues) and their lips are covered in hypersensitive heat-sensing pits. Armed with these senses, perfect colouration to camouflage in the jungle’s leaf litter, and a head full of teeth, they will find the trail of a large mammal and hide beside it waiting to ambush anything which walks into their path. 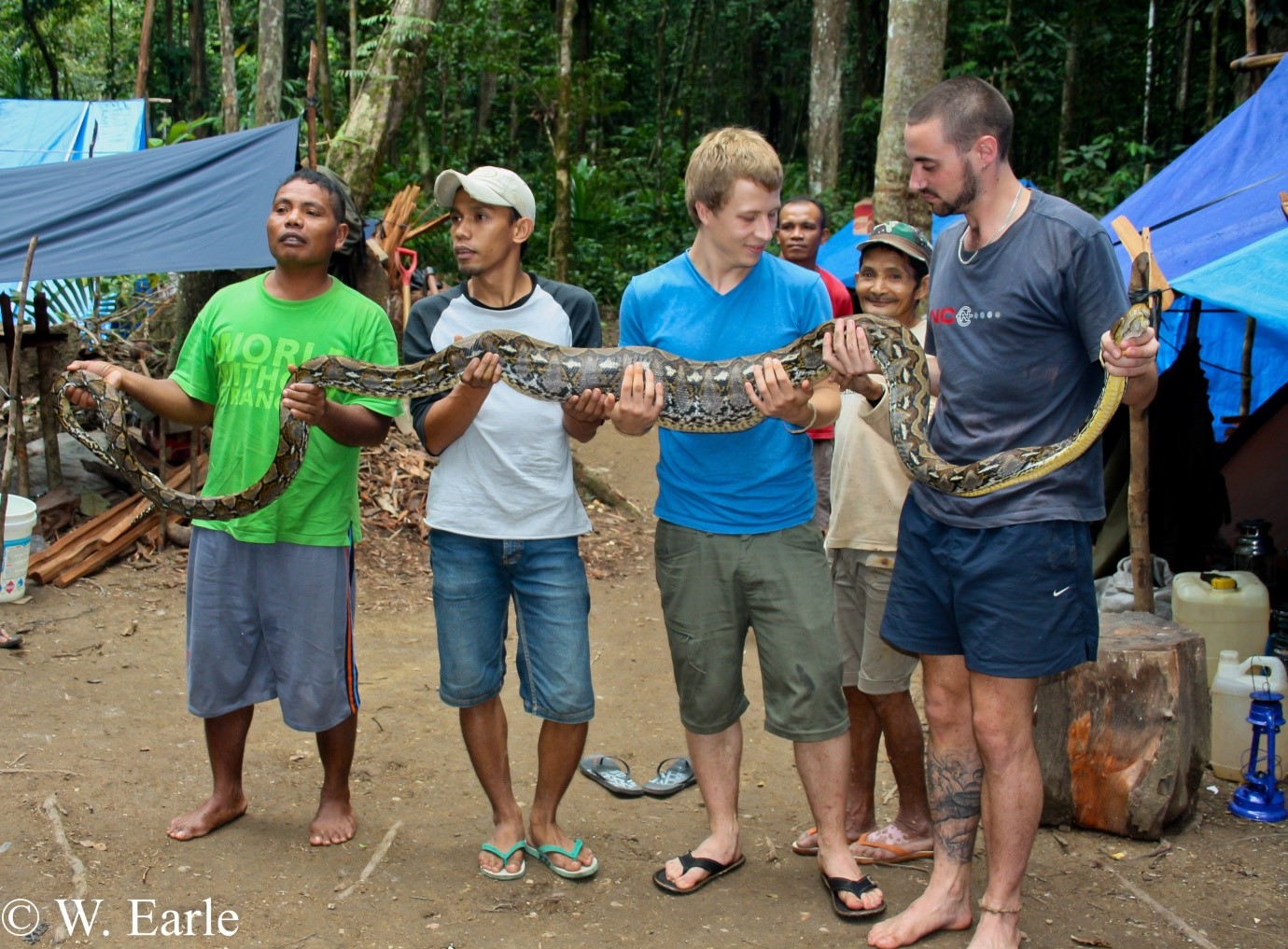 (from left to right): Usman the herp guide, Fifin, Joe the ornithologist, Lasah Hemu (hiding in the back), and Damian the herpetologist.