In the Calakmul Biosphere Reserve in Southeastern Mexico, climate change has caused unpredictable rainfall, drought, and crop failure, affecting both the wildlife and communities that live in and around the reserve. Calakmul and its surrounding forests are not only home to a wide variety of fauna, including over 400 jaguars, but also to numerous Mayan indigenous communities who have inhabited the areas now belonging to Southern Mexico, Guatemala, and Belize for thousands of years.

Traditionally, these communities have farmed within and around the forest and Mayan civilization is recognized for creating biodiverse and fertile food forests around their cities. These fruit and flower trees still surround many Mayan ruins, which attracts wildlife in great numbers even today. However, as crops fail, many communities have turned to livestock, which can lead to both human-wildlife conflicts with jaguars and further deforestation to create pastureland.

An alternative to livestock could be organic honey production, which aligns both with local traditions and livelihoods as well as increased protection of the forest. Here is how organic honey cooperatives could help Calakmul’s communities and wildlife. 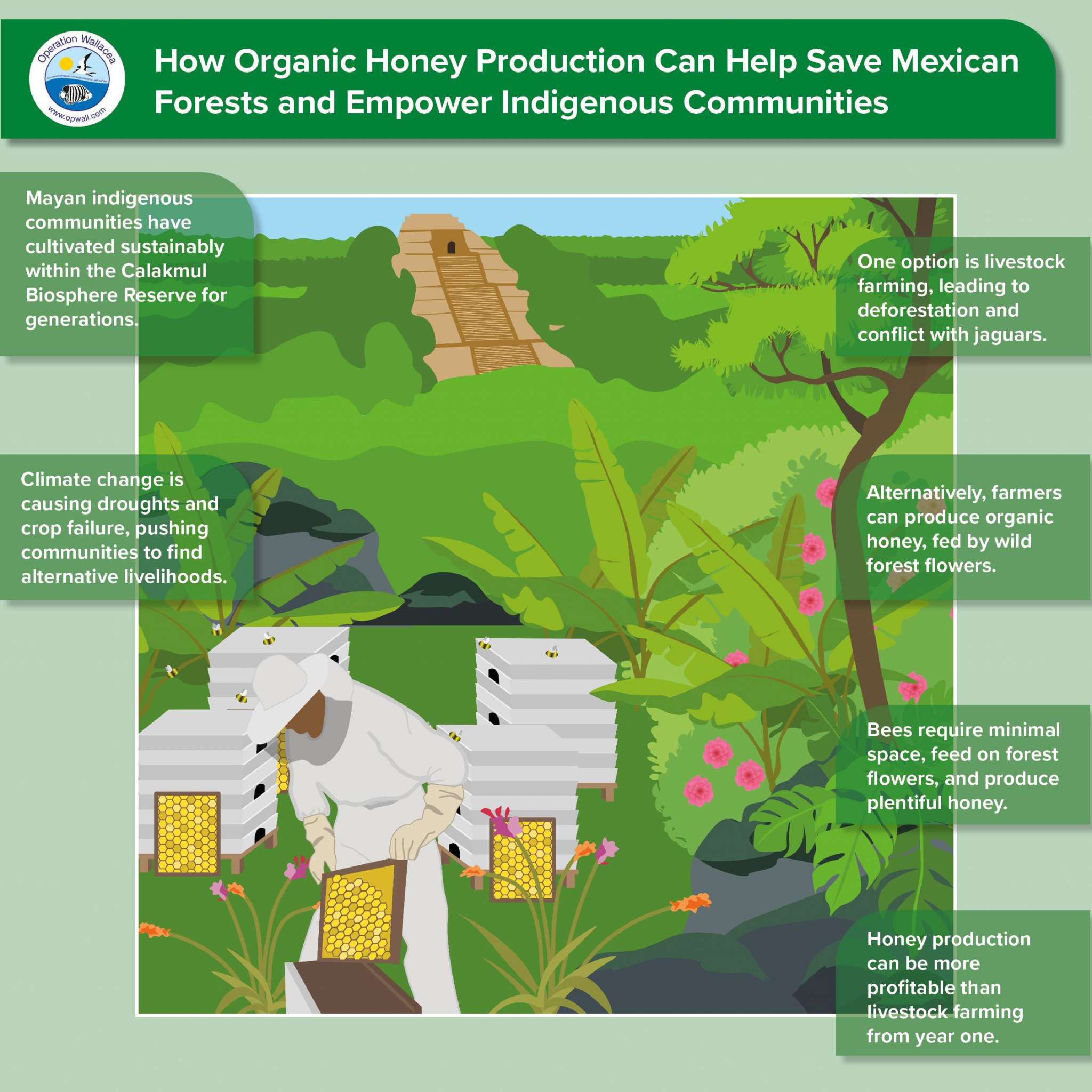 The production of organic honey in Calakmul depends on bees having ample access to wildflowers growing naturally within the local forest. The honey produced will be tastier, more unique, and more profitable if it is the product of bees that forage in wild and biodiverse areas. Furthermore, organic certification could be garnered to increase the value of the honey and develop a recognizable local brand.

As a result, successful honey production incentivizes reduced deforestation, monoculture, and use of pesticides and fertilizers as the health of the bees depends on standing trees!

Importantly, honey production is already an established business model within the Calakmul Biosphere Reserve and its surrounding areas, although there is still room for expansion. Economic assessments of current honey production suggest that honey can be more profitable than livestock in areas where land is restricted because of proximity to the forest.

This difference is because honey production is less expensive to start and run, meaning that it is possible for a honey farmer to begin making money in their first year of business. Erecting apiaries takes very little space and can be done within the forest, so farmers can increase their incomes without feeling pressure to cut down the surrounding forest. Finally, honey as a product is more amenable to economies of scale than livestock (meat), meaning that many families or communities working together in a cooperative have an advantage, rather than competing with each other.

3. Conflicts with jaguars can be eliminated.

The combination of decreased water sources and increased numbers of livestock has contributed to rising conflict between humans and jaguars in Calakmul. The drought has pushed jaguars south, out of the protected core zone and closer to human settlements, following both water and their prey. Meanwhile, humans continue to encroach into the forest, bringing the two populations closer together and creating conflict where there previously was none.

Happily, the incentives surrounding honey production mean that forests can remain intact, human encroachment diminishes, and livestock is no longer available as a food source for jaguars. Bees and jaguars coexist in peace in the forest, meaning farmers no longer need to see these cats as a threat to their livelihood.

Mayan communities have traditionally cultivated in and around the forest of Calakmul Biosphere Reserve for generations, but climate change has impacted the success of their crops. The development of organic honey production is an opportunity to increase local income while protecting – and even enhancing – the biodiversity of the surrounding forests.