How does Transylvania’s agriculture promote biodiversity?

Romania’s central region of Transylvania is a popular tourist destination for foreigners and locals alike who marvel at charming ancient architecture in UNESCO World Heritage sites like Sighisoara and feast on tasty local cuisine from the surrounding farms. This region is also known for its natural beauty with rolling hills, wildflower meadows, colorful birds, and curious wildlife. This natural and cultural tapestry is the result of a Germanic group called the Saxons who inhabited Transylvania through the 13th and 14th centuries.

The Saxons figured out ways to sustain agricultural outputs by leveraging local biodiversity, rather than fighting it. Over a thousand years later, Romania remains one of Europe’s most biodiverse countries: a refuge for birds, butterflies, and megafauna that have lost their homes to industrial agriculture over the 19th and 20th centuries. Arguably, this biodiversity can be attributed to the continued use of traditional agricultural methods across Transylvania. 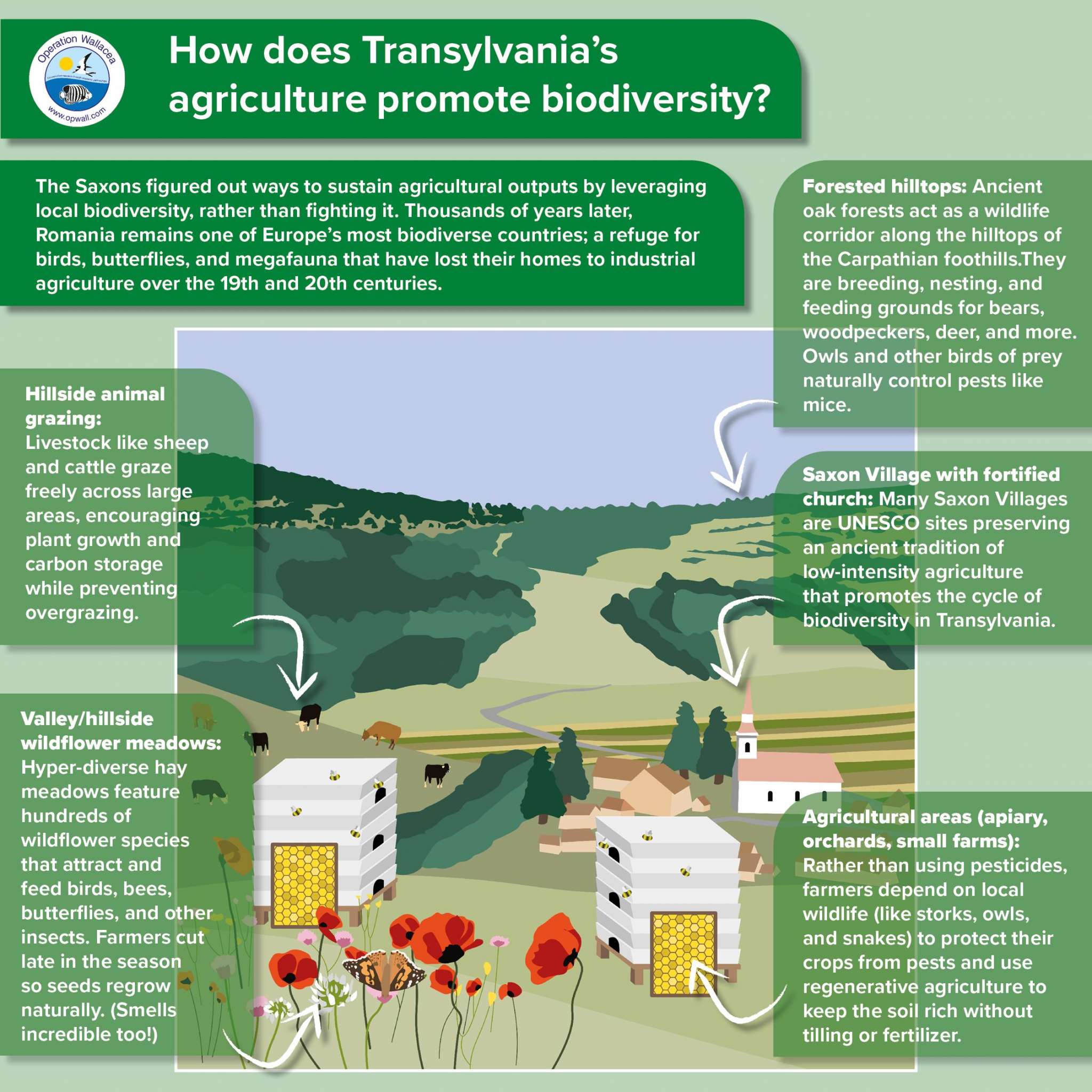 Let’s take a closer look at how Saxon agriculture enhances biodiversity in Transylvania:

One of the most famous sights in Transylvania is the daily migration of livestock like sheep and cattle between their homes and the surrounding meadows. At dawn, families in Saxon villages open their paddocks, and livestock stream calmly into the grasslands, where they can roam and graze freely throughout the day. Like clockwork, at dusk, the animals make their way home to spend the night safely within the village.

Free grazing by large ruminants has a positive impact on grassland health and biodiversity for several reasons. First, the lack of fencing prevents overgrazing as livestock can feed across larger areas, choosing the tastiest grasses and avoiding pressure on specific pieces of land. Second, the hooves of livestock compress grasses into the soil, increasing carbon storage. Third, livestock feeding from diverse grasses allows for seed dispersal over large areas, meaning many meadows in Transylvania contain 50+ species of plants!

Farmers in Transylvania have traditionally cut hay meadows very late in the season, which allows plants to flower and go to seed before they are cut. This system naturally increases the diversity of the grasses in the meadows as flowers and seeds attract and feed birds, bees, butterflies, and many other insects who pollinate and disperse seeds.

Not only are these fields incredibly beautiful (not to mention the smell!), but the organic processes create a healthy environment for pollinators that have become rare in other areas of Europe due to monocultures and pesticide use.

Transylvania is located within the rolling foothills of the Carpathian Mountains, one of the largest expanses of connected forest in Europe. The hilltops are still covered in native oak forests (sometimes planted by the Saxons!) that create natural corridors for large predators like bears, wolves, and wildcats who need large places to roam. These forests are important breeding and nesting grounds for bears, woodpeckers, deer, and more.

Furthermore, the forest edge touches many meadows and crop fields, meaning owls and other birds of prey have a natural vantage point for helping to control pests like mice and voles. The forest-meadow connection is critical to the biodiversity of Transylvanian agriculture.

Rather than using fertilizers and pesticides, farmers grow diverse crops within small areas of land to contribute to the biodiversity of the soil below. These areas also work in symbiosis with nearby meadows and forests as the bees pollinate flowers and fruit trees while storks can visit crops to eat destructive insects like snails. These diverse farms also enable farmers to be largely self-sufficient, producing all they need in a small area with enough to store for the winter or sell to visitors who want to taste the local produce.

While not all is rosy in Transylvania, with the Romanian government and EU often pushing for increased industrialization, the traditional Saxon villages through the region help preserve these ancient traditions for future generations. Many Saxon villages like Sighisoara and Viscri are UNESCO World Heritage sites that receive funding to protect cultural heritage, which includes agricultural practices.

Transylvania’s traditional low-intensity agriculture has protected Europe’s medieval wildlife for generations. The success and survival of this model may serve as an example for how agriculture can restore and nurture biodiversity across Europe today.