Honduras – Rebuilding the Caribbean One Sea Urchin at a Time

Published in The Marine Biologist magazine 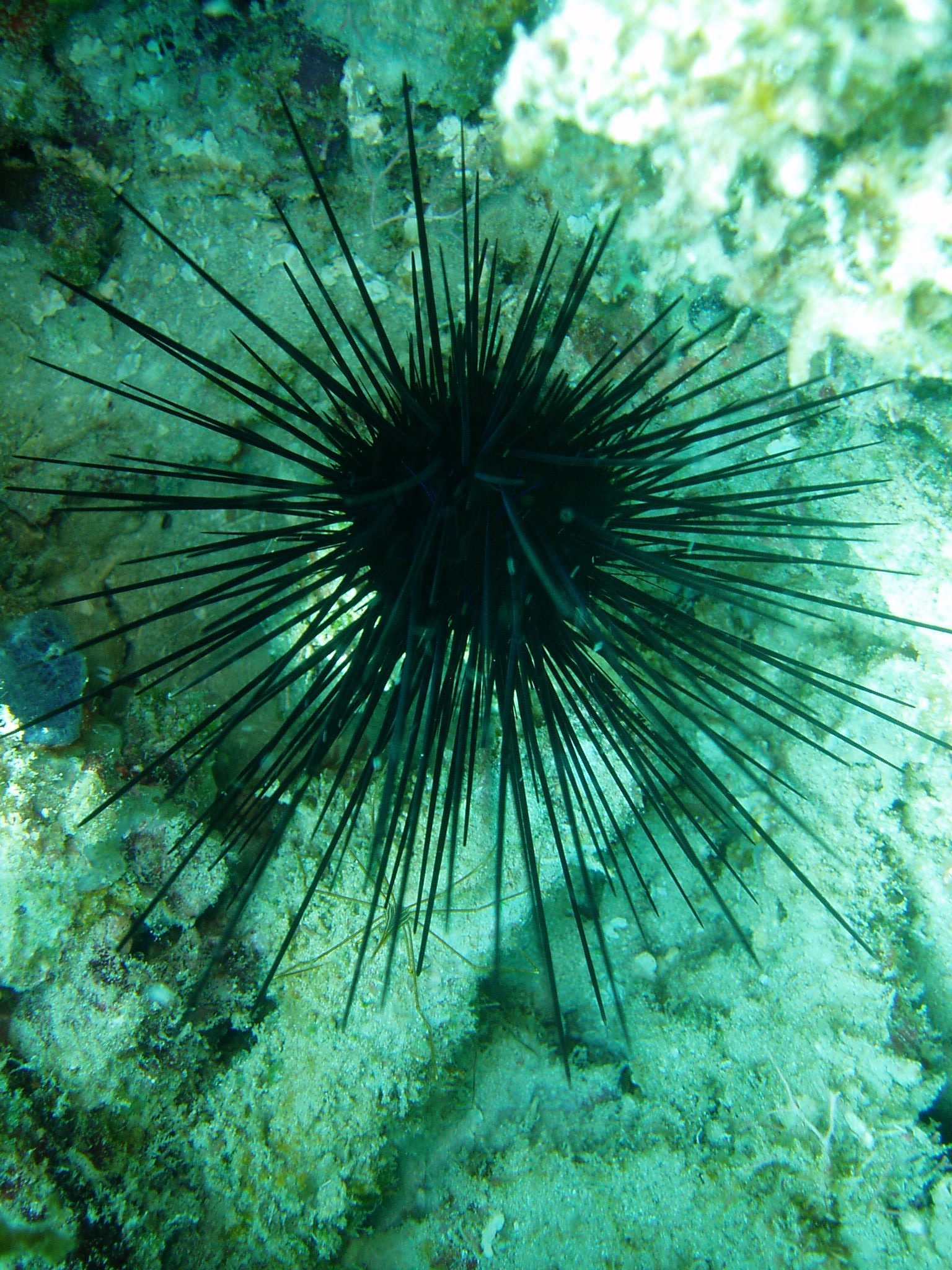 Since the birth of the package holiday, sea urchins have wreaked havoc with the appendages of holidaymakers. For most people the waters of the Caribbean are an irresistible draw but, with long-spined sea urchin (Diadema antillarum) population densities of 5-10m-2, one misplaced step could mean that the remainder of your time in paradise is spent painstakingly removing spines from the sole of your foot. For those that cursed their existence, a dream came true in 1983-84 as an unknown pathogen caused population reductions of 95-99% across all Caribbean coral reefs; but it did not take long for people to recognise that the realisation of this dream had created a nightmare…

When densities are high enough, the long-spined sea urchin can remove the entire daily net growth of macroalgae from the reef, which stimulates hard coral growth. Hard corals provide the habitat structure and living-space needed to promote biodiversity and ecosystem function.

However, disease rendered this key species functionally extinct throughout the Caribbean in the early 1980s. Infected urchins were first detected on Panamanian reefs in January 1983 and, by January 1984, all populations had been reduced to a regional average of just 0.01m-2. Loss of these urchins is a major driving force behind the onset of the near-ubiquitous macroalgal phase-shifts that currently plague Caribbean reefs. Phase-shifts occur, in part, when proliferation of fast-growing macroalgae is left unchecked by herbivory so that it grows to smother the reef. This decreases hard coral cover and reduces biodiversity.

Over the last four decades, hard coral cover has declined by over 50% throughout the Caribbean; from a region-wide average of 34.8% in 1972 to just 16.3% in 2012. This dramatic coral loss has caused declines in fish and invertebrate populations and, if it continues, will negatively impact the 43 million people that rely on Caribbean reefs for survival. The IUCN estimates that Caribbean reefs generate >US$3 billion per year from tourism and fisheries alone. But, as reefs continue to degenerate, fisheries will become less productive, and SCUBA divers will take their money to less severely impacted reefs. 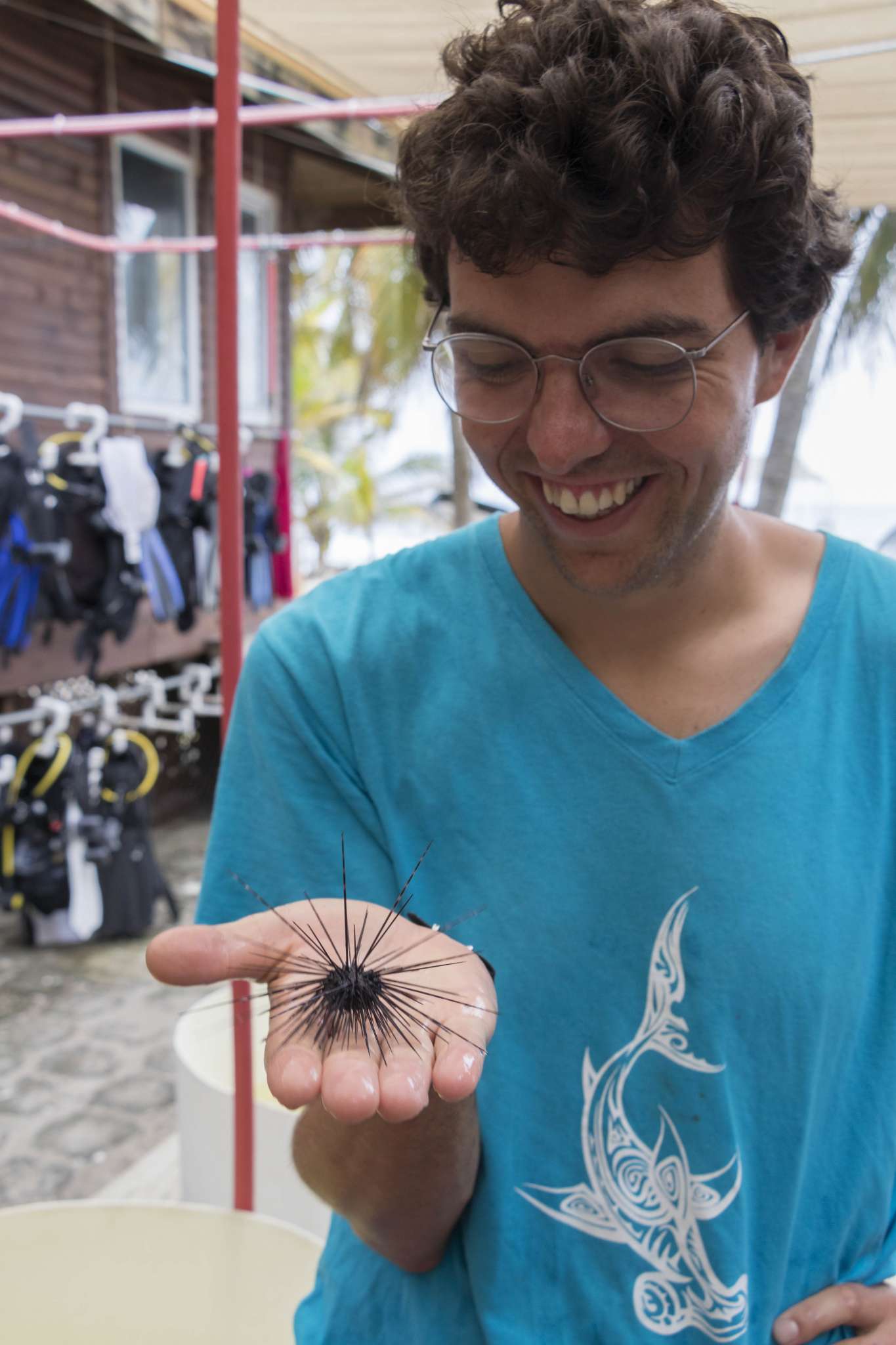 The continued macroalgal invasion of Caribbean coral reefs is, at least partially, attributable to the fact that recovery from the cataclysmic urchin mass-mortality event has been universally poor. Coral reef researchers and conservation managers unanimously agree that long-spined sea urchin populations must be restored in order to reverse the continuing upward trend in macroalgal growth.

Restoration of a species in decline is a notoriously difficult endeavour, but Opwall researchers working in Honduras think that they may have come up with a solution.

Banco Capiro is a recently discovered reef system located 8km offshore in Tela Bay, Honduras. With densities of 2.55m-2, Banco Capiro has the largest post-mortality long-spined sea urchin populations anywhere in the Caribbean. Ecosystem functions are restored when densities exceed 1m-2, so it is perhaps unsurprising that the extraordinary urchin densities on Banco Capiro coincide with an unprecedentedly high average hard coral cover of over 60%.

Since 2013, Opwall researchers have been hoping to unlock the secrets of Banco Capiro to elucidate the barriers preventing the wholesale recovery of the long-spined sea urchin. What is so special about Banco Capiro that populations have recovered there but not elsewhere?

Comparison of the ecological structure of Banco Capiro to the nearby ‘typical’ reefs around the island of Utila, indicates that long-spined sea urchin populations are failing to recover because macroalgal phase-shifts have flattened reefs to such an extent that there is now a deficit of hiding places in which juveniles can avoid predation. Somewhat ironically, it was its own functional extinction which stimulated the phase-shifts that caused the reef flattening that is now preventing its recovery! This finding indicates that conservation managers may stimulate population recovery by manipulating the fundamental structure of the reef. 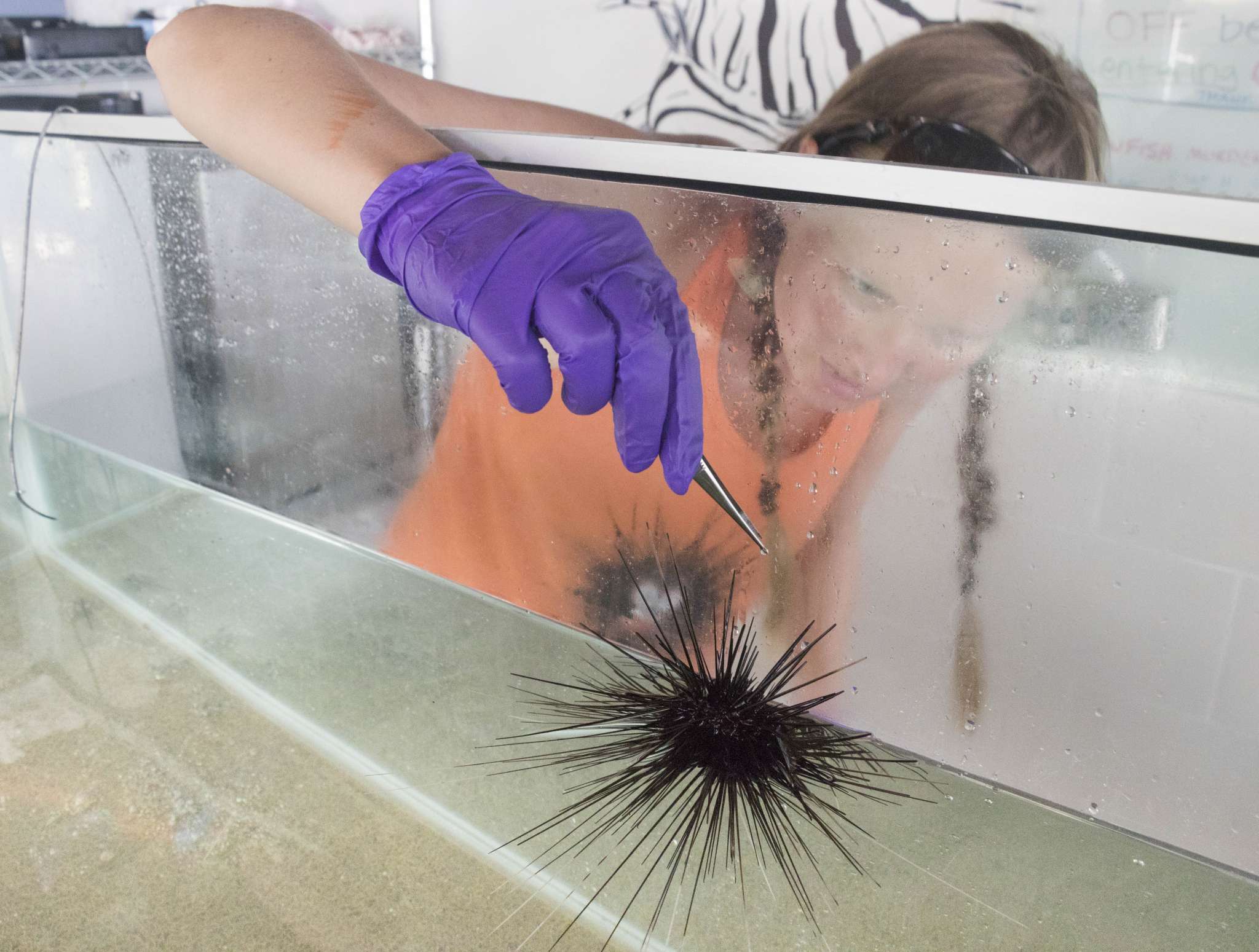 There is no magic bullet that can be used to stimulate population recovery over the entire 3.5 million km2 area of the Caribbean. The only way urchin densities will be increased on a regional-scale is by augmenting populations on a local-scale. Deployment of artificial reefs (ARs) at numerous locations around the Caribbean would increase the availability of juvenile predation refuges and stimulate population recovery on a local-scale.

So why are we not just cruising around the Caribbean dropping concrete onto coral reefs? It is possible that this simple solution would be a highly effective way to increase habitat availability, but at this point there are too many unknowns for it to be seriously considered.

Is restoration of the long-spined sea urchin a worthwhile pursuit in a warming world? The Intergovernmental Panel on Climate Change (IPCC) predicts that sea surface temperatures (SST) in the Caribbean will increase by 0.68-3.14°C by 2100. If urchins lack resistance to these increases, efforts to restore populations may ultimately prove futile and scarce conservation resources should be expended on other initiatives.

Opwall researchers investigated the effect of rising SST on the predator avoidance responses of the long-spined sea urchin. They found that urchins are likely to be resistant to near-term SST increases, but, in the long-term they may succumb to thermal stress. These findings suggest that, on balance, population restoration is worthwhile in the face of climate change. Even if they are ultimately doomed, immediate augmentation of populations will increase ecosystem resilience and buy conservation managers time to create longer-term solutions.

The negative consequences of rising SST on predator avoidance responses were reduced when urchins were taken from areas of high habitat complexity. ARs enhance habitat complexity, therefore their use may mitigate the effects of climate change and increase the probability of long-term population survival.

So, we now know that the restoration of the long-spined sea urchin is worthwhile and will almost certainly have beneficial impacts on reefs around the Caribbean, that the barriers preventing natural recovery have been identified, and that deployment of ARs made from cheap and readily available building materials may help to overcome these barriers, whilst offering the added bonus of mitigating the negative effects of future climatic changes. Surely now is the time to start throwing the concrete overboard?!

Nothing in life is ever that simple. Rehabilitation of the long-spined sea urchin will require ARs to be placed on 1000s of reefs across the entire extent of the Caribbean. Who is going to pay for the materials? Where is the manpower needed to install them going to come from? Is wide-scale AR deployment really a logistically feasible management strategy?

Public awareness of environmental issues is increasing, and this is clearly seen in the dive industry. With the increasing prominence of initiatives such as PADI’s Project AWARE, ecologists must capitalise on people’s interests and engage the masses in active conservation. By designing an ‘Artificial Reef Construction’ SCUBA diving speciality, Opwall scientists hope to overcome the logistical, financial and manpower issues associated with wide-scale AR distribution. 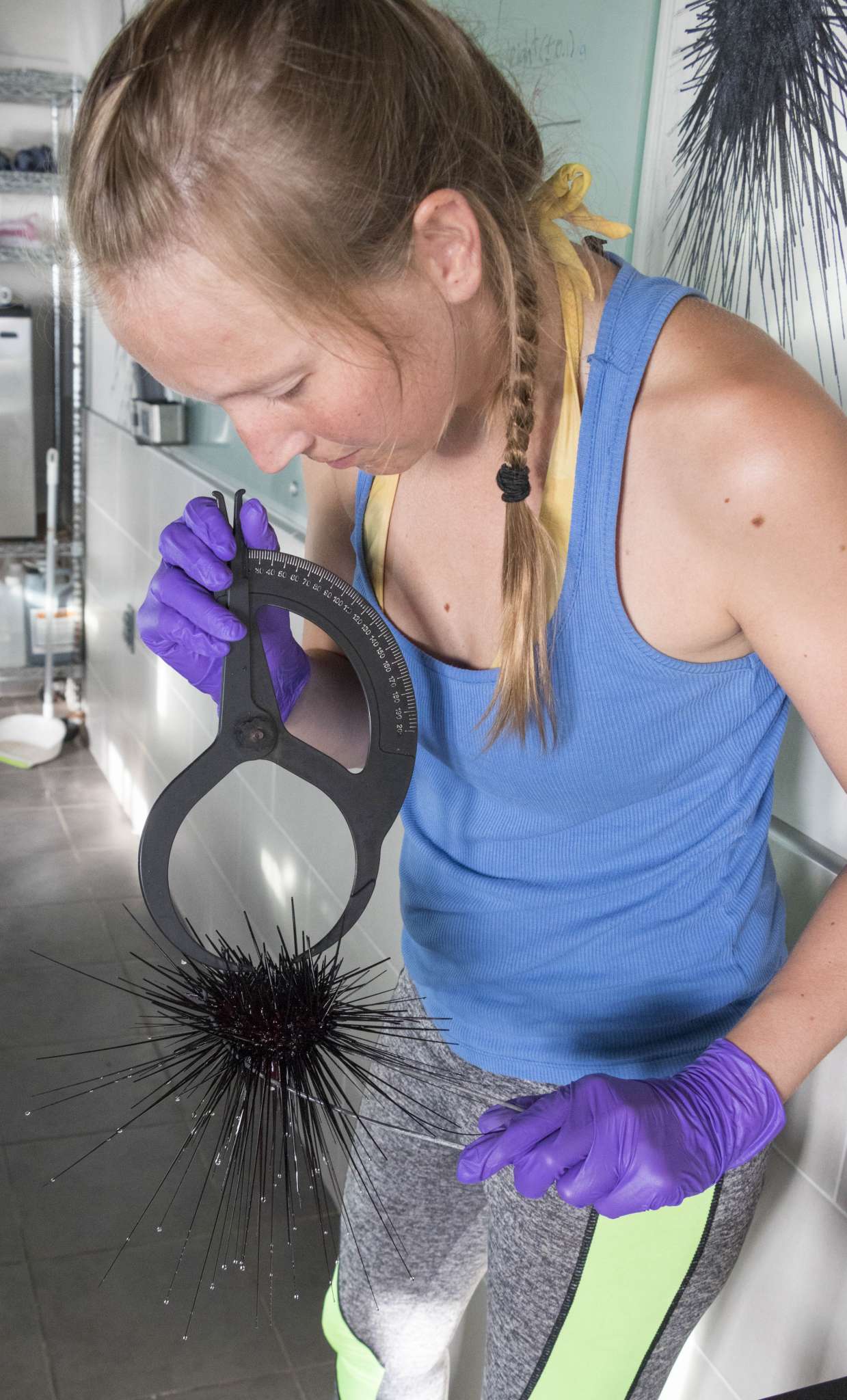 Dive centres throughout the Caribbean could charge customers to learn about the importance of reef restoration and assist with AR construction. The majority of recreational divers will need to learn new advanced underwater skills; people can benefit from the personal development aspects of the programme, whilst also engaging their conservation interests. Dive centres are financially incentivised to assist with the construction of ARs and are obliged to provide materials and logistical support for the course to be completed. If enough dive centres across the entirety of the Caribbean teach this speciality, there may be so many hotspots of local urchin density increases that it actually represents a region-wide population recovery. Reinstatement of their ecosystem services will reverse the misfortunes of the reef. This will not only have beneficial ecological effects, but it will also help to sustain, if not improve, the socioeconomic circumstances of the millions of people that rely on the Caribbean’s coral reefs for survival.

So next time you find yourself gazing out wistfully over the crystal clear waters of the Caribbean, spare a thought for the homeless long-spined sea urchin…and maybe throw in a breeze-block or two for good luck!