Written by and Photos Courtesy of Danni Gilroy

Hi everyone! My name is Dr Danni Gilroy and I am the new Senior Scientist for Cusuco National Park, the Honduras site for Operation Wallacea’s terrestrial expedition. I recently went out to Cusuco for the March expeditions and here is a short blog about my time spent in the park as the Senior Scientist and Schools lecturer – and why I cannot wait to go back this summer! 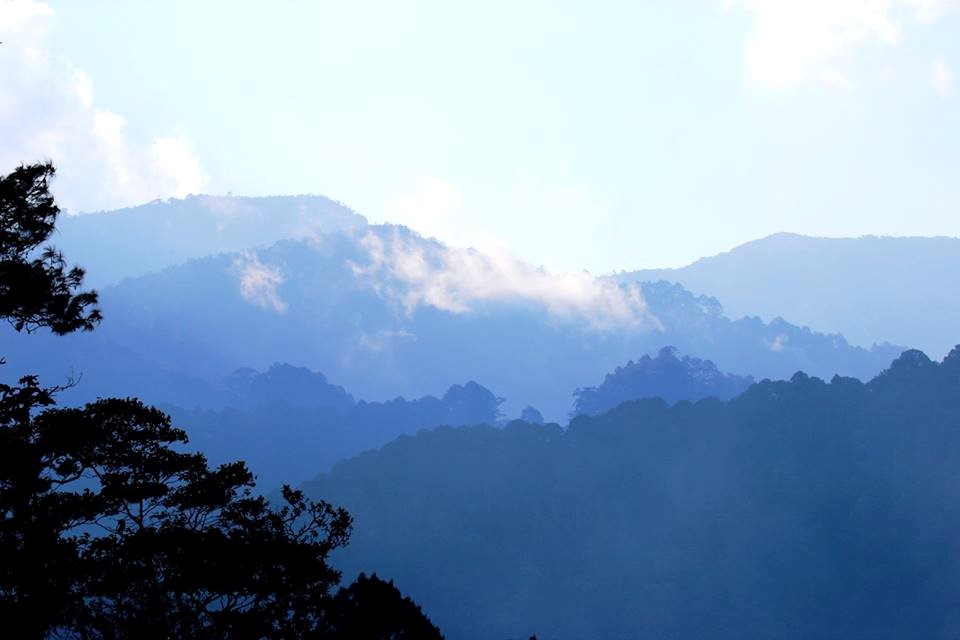 I arrived in San Pedro Sula on Tuesday 8th March after a long series of flights from London via the US with my colleague, Cusuco country manager, Declan Crace. Dec and I checked into the Gran Sula Hotel, who have been partners with us for a long time and it provides everything you could need – nice rooms, a pool (although it was currently under construction to be ready for the summer!), a gym, a restaurant and the all-important wifi! We spent the next couple of days running around the city preparing some last minute things for the field and meeting with the head of our NGO Partners ESAC, Roberto Downing. As a birder, I was already noticing the amount of lifers all around me. From my hotel balcony alone I saw long-tailed grackle, white-winged dove, white-lore parrots, kingbirds, white-winged and grey-blue tanagers, golden-fronted woodpecker, great kiskadee, american black swifts and american black vultures. I just couldn’t wait to get up into the mountains. It is no secret that San Pedro Sula is not the safest of cities but as long as you are sensible (do not wander the streets at night, be in groups, get taxi’s if you are travelling more than a few blocks), everything is fine! 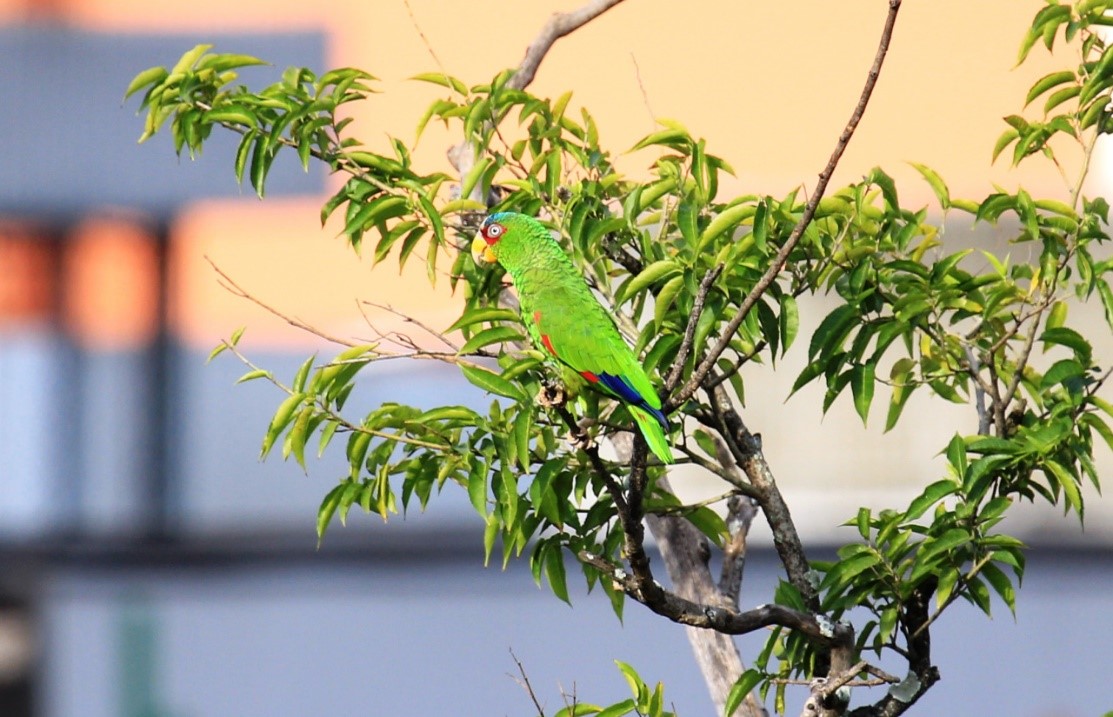 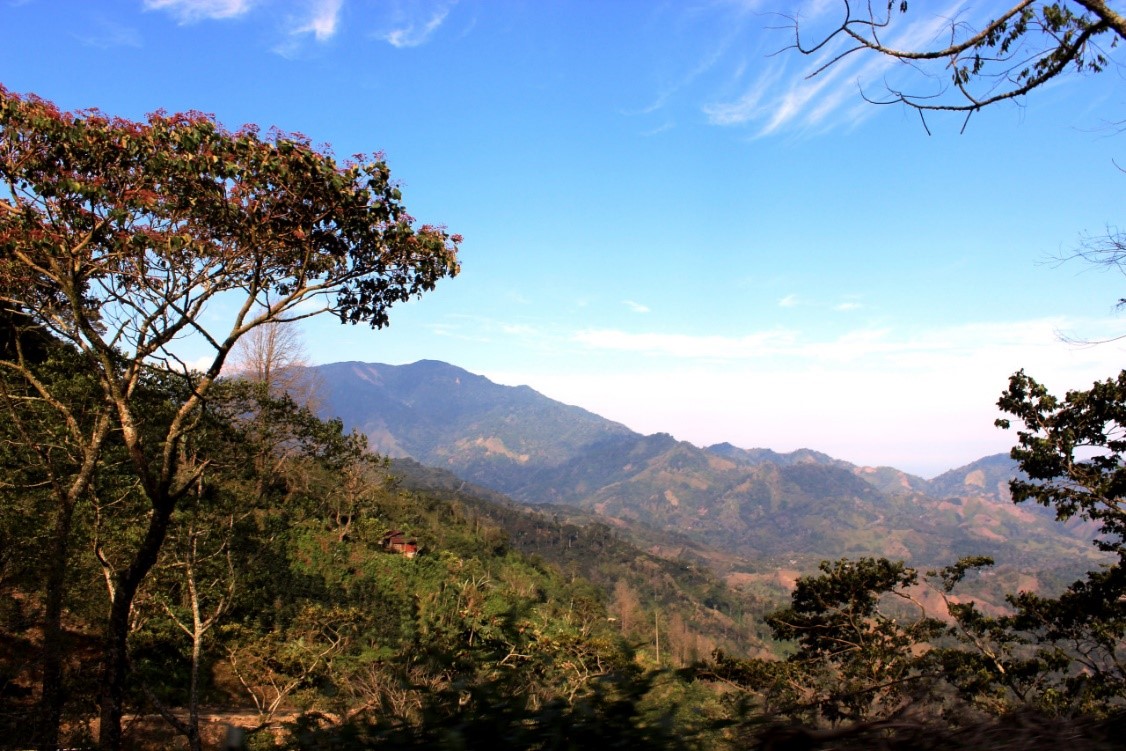 View on the ride up to Cusuco

We made our way to Cusuco National Park at dawn on the Thursday. This involved a 3.5 hour ride in the back of a 4×4 truck as we ascended into the lush montane forests. Birds of note on this truck ride were bat falcon, white-tailed (also known as black-shouldered) kite, swallow-tailed kites and more vultures – birds of prey galore! Within minutes of arriving at base camp, I got my binoculars on my first ever hummingbird, a violet sabre-wing. On the first day in camp I quickly became accustomed to the ‘local birds’ and the on-site ornithologist, Jack Baddams, taught me little tricks to remember which birds were doing which calls. For example, the slate-coloured solitaire sounded like metal wind chimes, common bush tanagers would squeak to one another constantly, the yellowish flycatcher would make a noise that sounds like a samurai sword swishing, the black-headed nightingale thrushes sound like jingling keys, and the blue-crowned motmots practically bark their own name! Being spring, there appeared to be migrants about (which are all exciting records for the park given we have next to no data outside of the summer season). My first warblers spied were golden-winged, black-throated green warbler, wilson’s warbler and later I was to add golden-crowned, yellow-rumped and grace’s warbler to the list too. 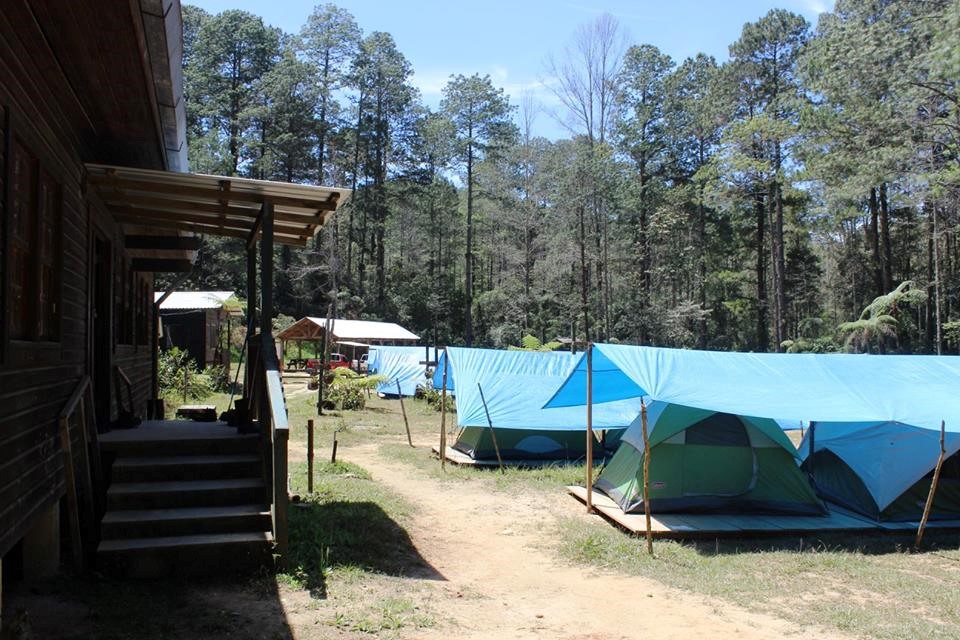 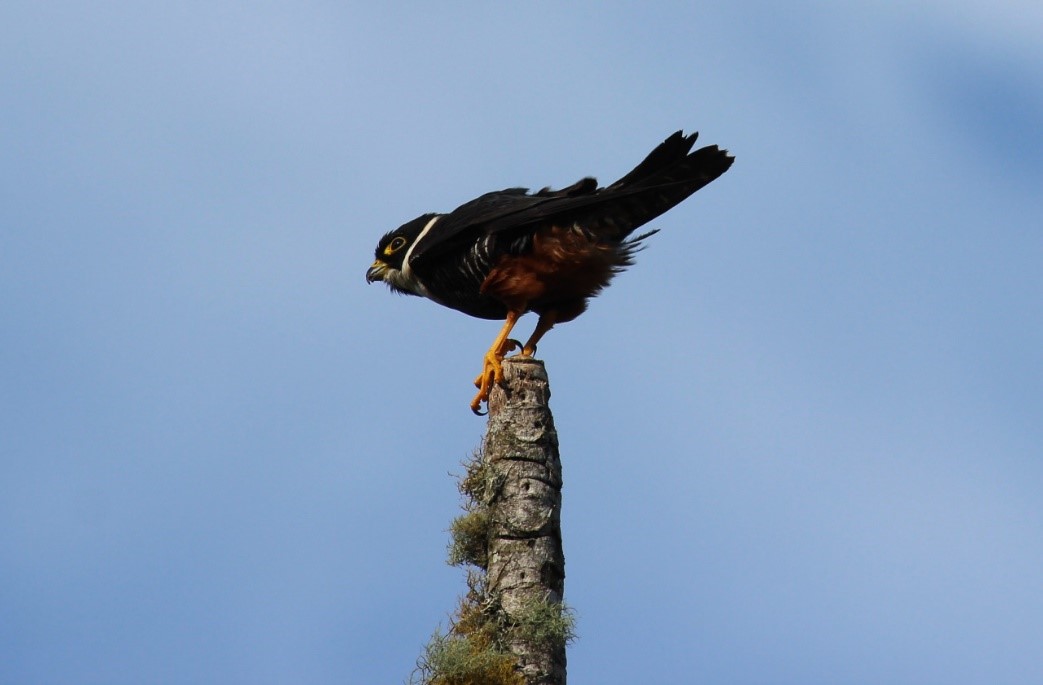 I spent three weeks in the jungle and it was incredible. I took part in the herpetofauna surveys done both during the day and along in the rivers at night after some excellent training from our herpetologists Tom Brown and Justin Clause. We caught a number of snakes such as the green racer and blunt-headed tree snake, but also saw a number of pit vipers and other venomous snakes too. We took chytrid sample swabs from all frogs caught, as we are particularly interested to establish the prevalence of this fungus in our endemic and endangered species, like the Cusuco spike-thumb frog (Plectrohyla dasypus). There were also some fascinating behavioural observations from the endemic Anolis cusuco lizards – so keep an eye out for a future publication! 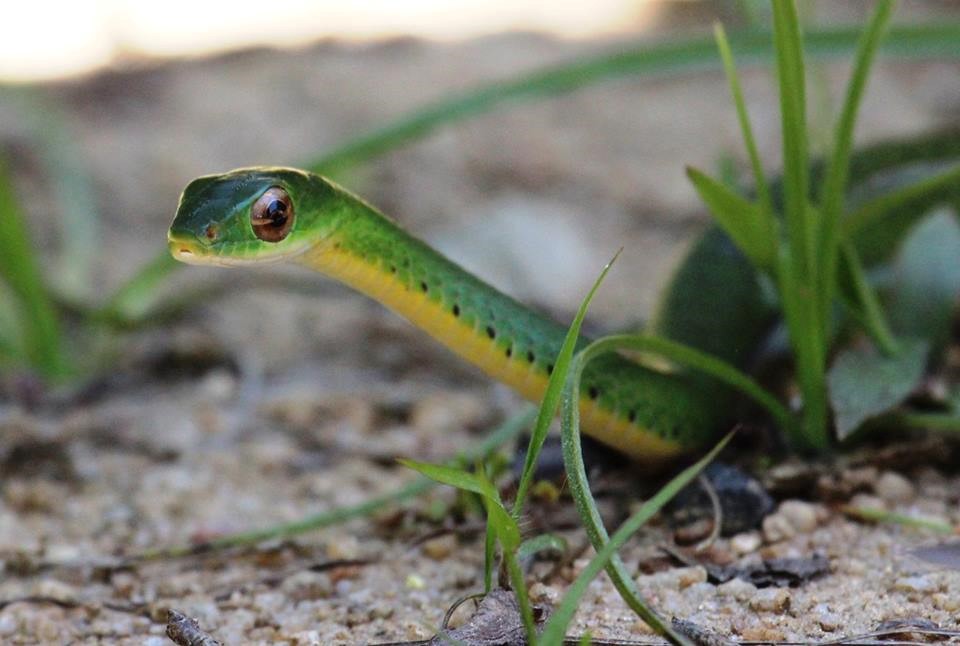 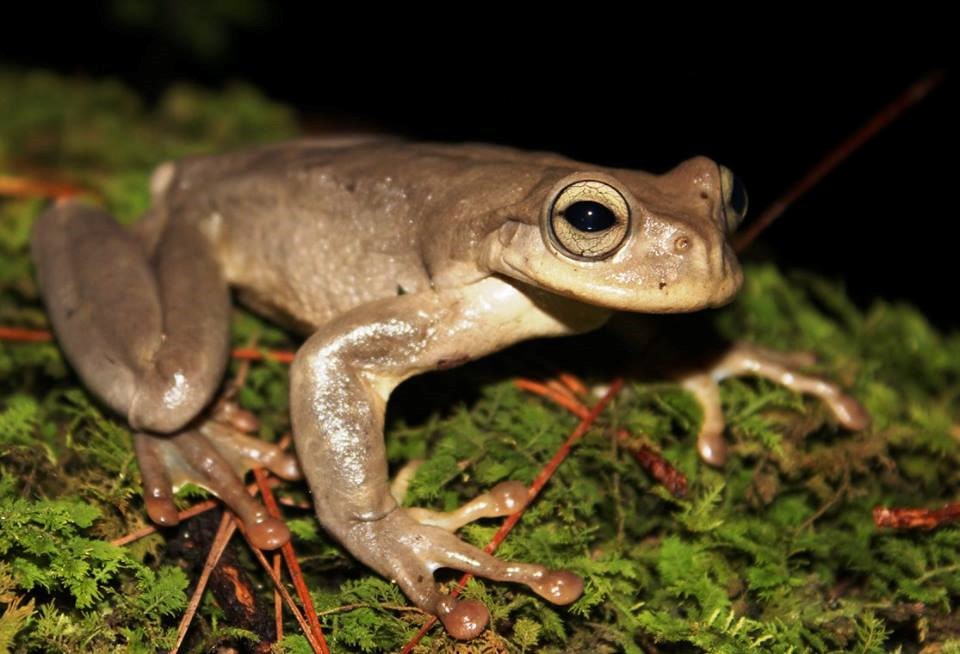 Birds are another taxonomic group of animals that are ideal indicators of forest health. As a birder I particularly enjoyed the challenge of point-counts, having to ID birds from their sounds and from brief views of them in flight or high up in a canopy such as the resplendant quetzal and emerald toucanette. This sort of data is often used with caution as the data quality is only as good as the quality or knowledge of the observer. It is best used in combination with mist-netting data. This can be a favourite with our volunteers and students because it is a chance to see birds up close and in some cases, even get your hands on one for taking measurements. Some highlights for me were the many green-throated mountain gems, slate-throated whitestart, ochre-bellied flycatcher, ruddy foliage gleaner, chestnut-capped brush finch and azure-hooded jay. In the evenings we also mist-netted bats as part of the mammal research, catching three different species: Anoura geoffroyi, Natalus stramineus and Pteronotus parnellii. 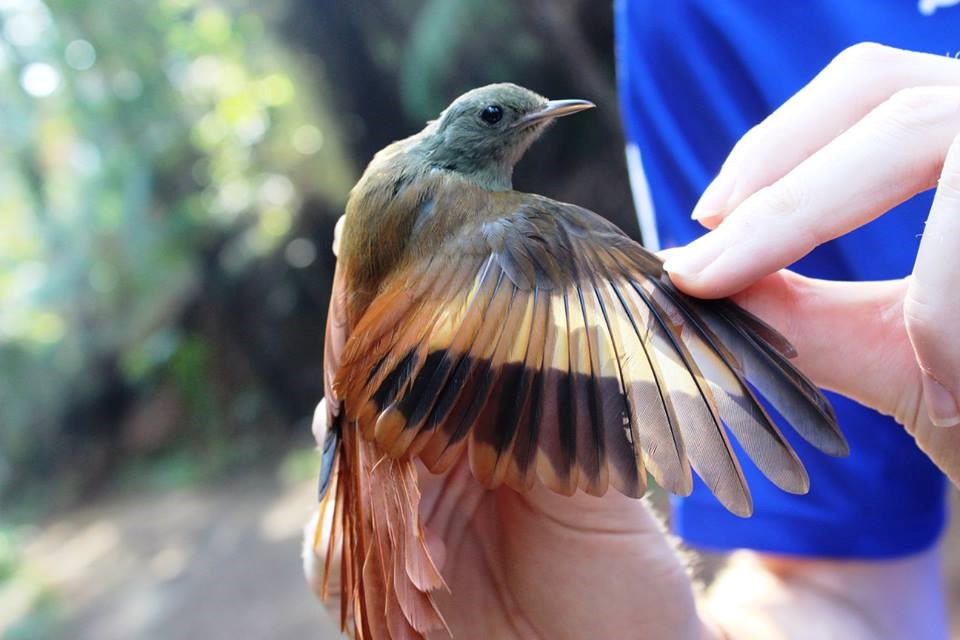 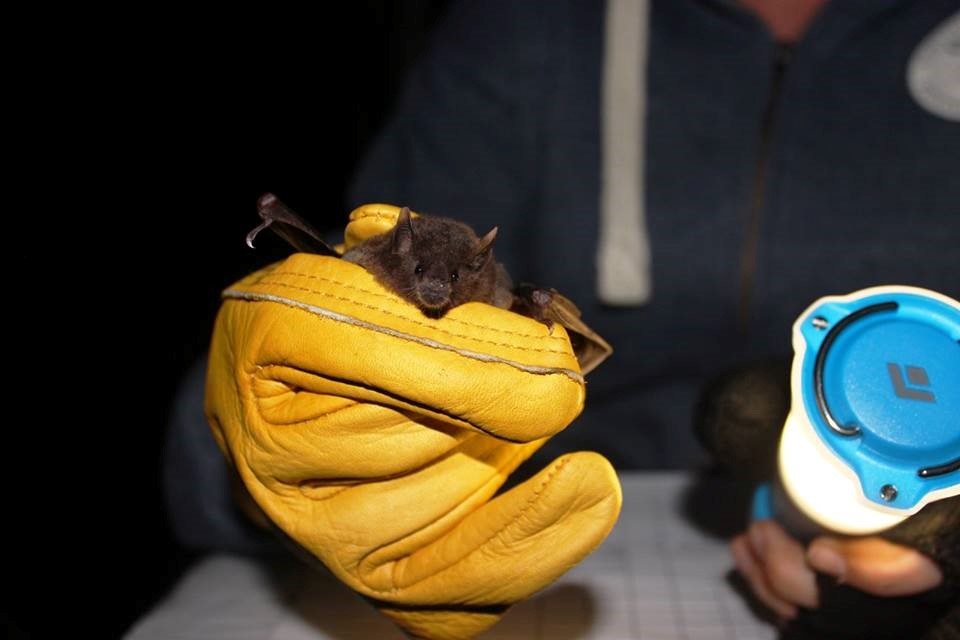 For the March expedition, our main invertebrate research was focused around dung beetles (pitfall traps) and moths (light traps). In the afternoons our entomologist Ashley Zubeck would set out pitfall traps in the forests using fresh dung, collect them in and teach students how to sort and ID dung beetle specimens using dichotomous keys. Almost every evening we would run the light traps and the variety of moths caught were insane! Last but not least, we had a momentous botany team with us. It was Ireland’s largest tropical botanical expedition (16 botanists) that set out to gather a comprehensive ecological forest inventory from Cusuco National Park. We always run habitat surveys, as that data is essential for all of our animal research teams, but on this expedition we also did a lot of botanical research which involved trained tree-climbers accessing the canopies for sampling. Please check out https://youtu.be/s_0nYJz3xzk if you want to find out more! 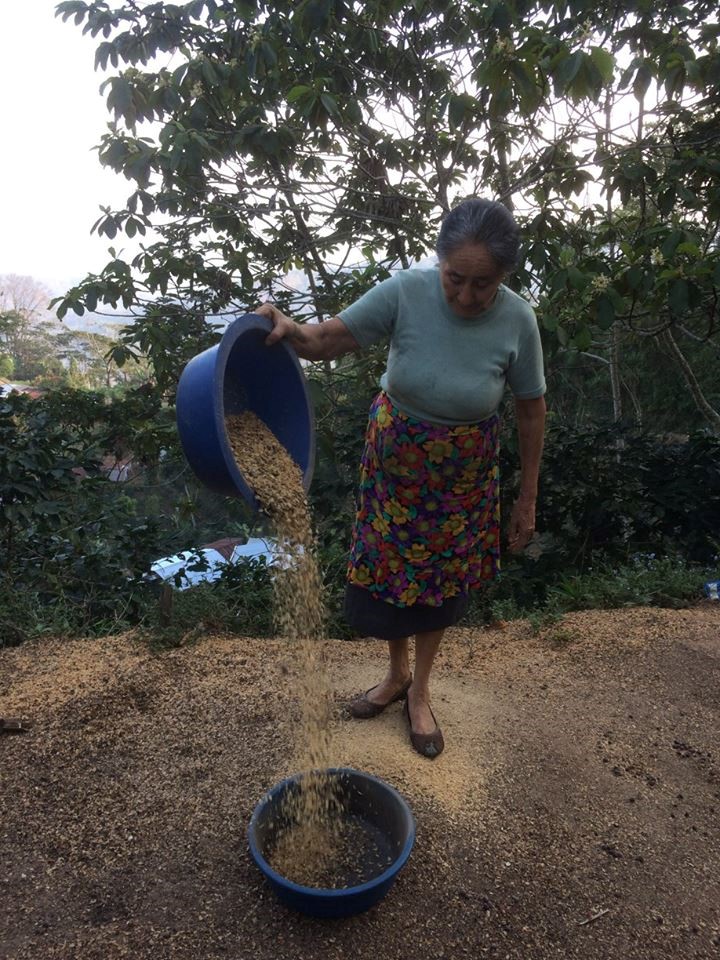 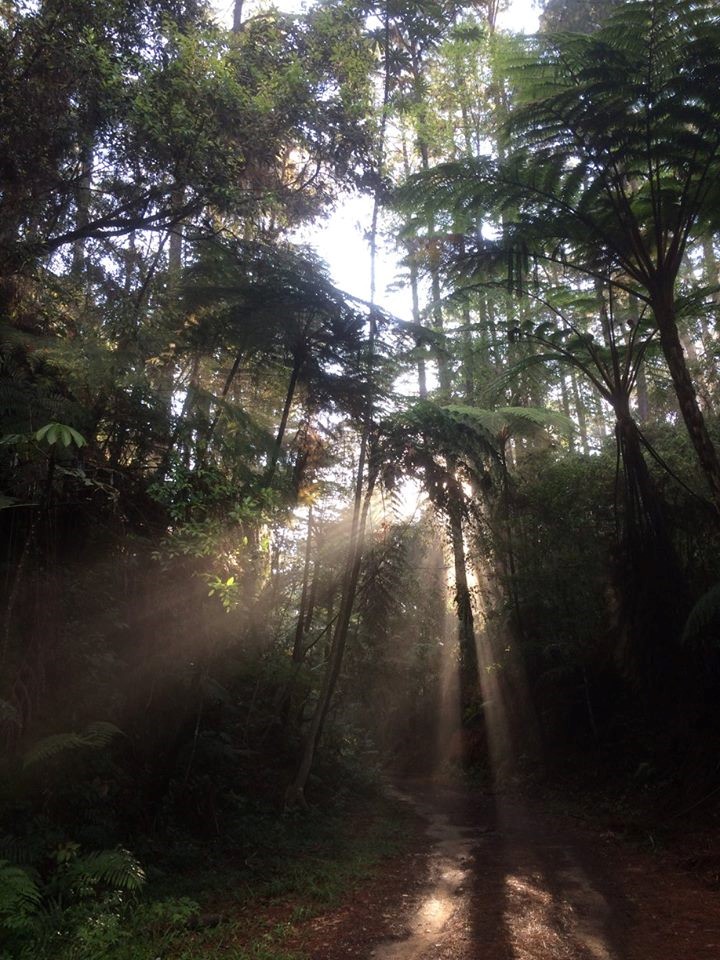 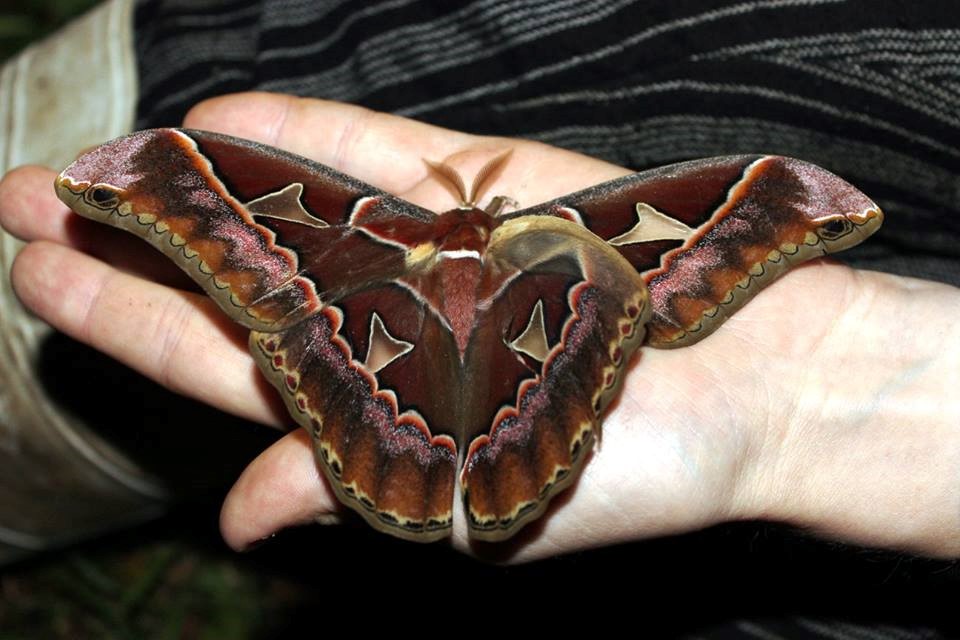 So how did a standard day go? I would wake at 4.30am, unfurl mist nets and catch birds until 7am, breakfast of a flour tortilla with jam and a ‘pint’ of locally-grown Honduran coffee. Nets were closed at 10am and then I would do jungle skills (teaching how to make fire, assemble hammocks, navigate a GPS etc) and lecture at 11.30am and then 1.30pm, before and after lunch. The food on site was always good – much better than I had anticipated. It could be anything from fried beans, tortillas, guacamole and salsa to spaghetti and bolognase sauce or chicken with egg-friend rice. Afternoons were spent either doing a herp survey, a habitat survey (measuring trees) or I would take a group down to Buenos Aires, the local village ca 6-7km away and we would make coffee from scratch. That’s right, from the bean on the plant all the way to brewing in the pot to be drunk. After dinner in the evenings, I would do a mix of light trapping, river transect herp surveys or assisted bat scientist Vivien Hartwell. Never a dull day to be had in Cusuco! 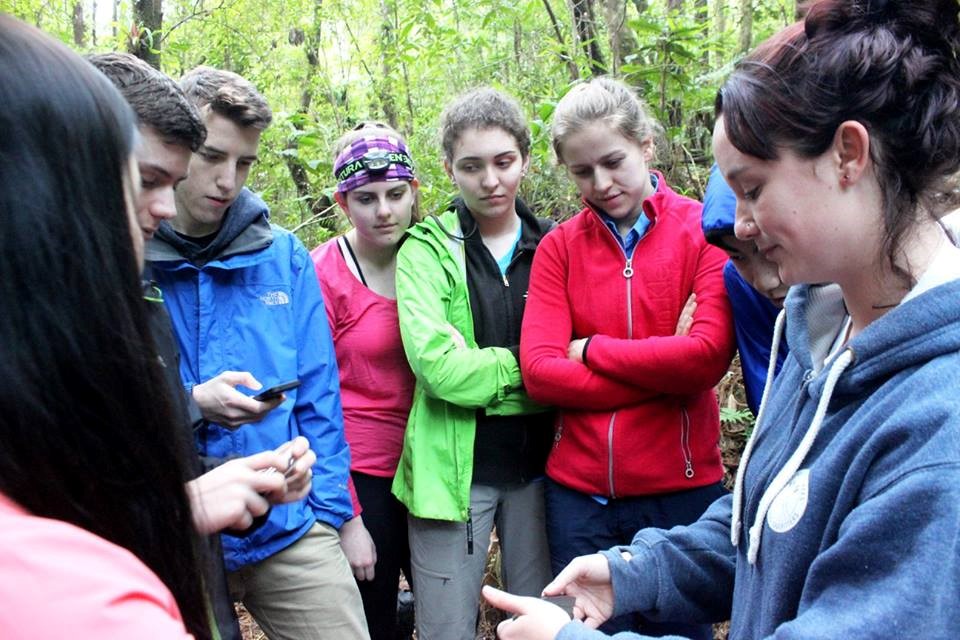 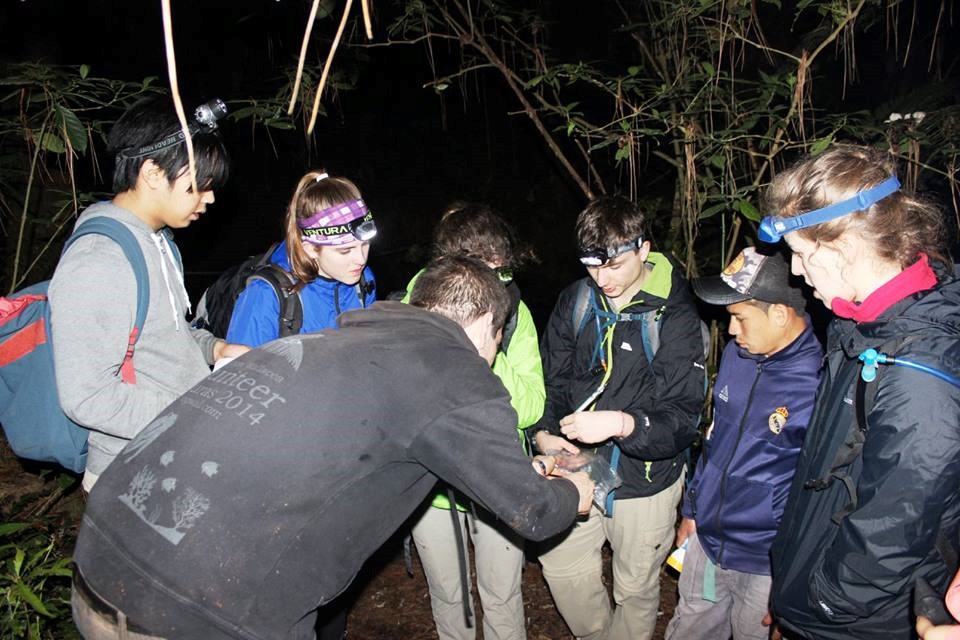 We returned to San Pedro Sula on Easter Sunday 27th March and we all went straight to McDonalds to cram our faces with junk food (the food was good- but sometimes you can’t beat the guilty pleasures!) Not only did I spend three weeks doing great science, but I came away with new friends too. Many thanks go to an incredible team of scientists (Ash, Jack, Justin, Tom, Viv) an incredible team of managers (Dec & Claudia) our wonderful medic (Abby) and fantastic schools (big up to Canada!) for making it a successful mini-season. Now bring on the big season this summer! 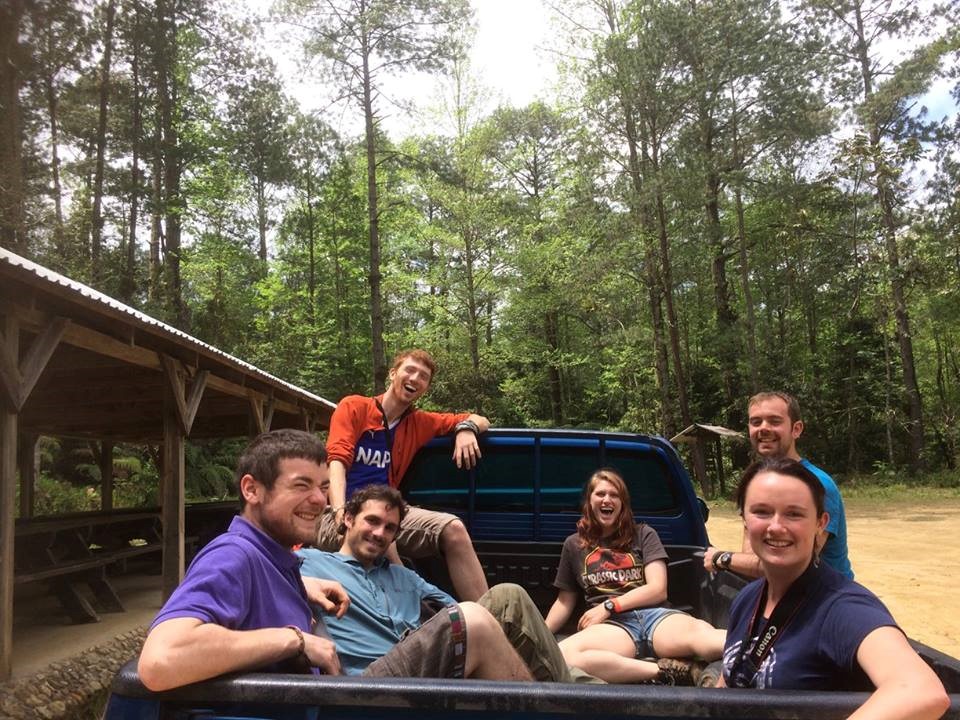 Just some of our large staffing team (from left): Tom, Justin, Jack, Ash, Dec and me (Danni!)