The Dulwich College team of twenty three students and four staff were hugely excited to go to Ecuador and Galapagos this summer, especially having heard about the previous two Opwall trips that the school had done.  As the Galapagos is a really expensive destination we had worked hard with our fundraising – cake sales, Christmas Fairs, Pimms Tents and even face painting.  We were hugely grateful for the Murray Foundation Award as we did struggle to meet our goals but luckily we had a very successful final fundraising event which included selling plants at our Founders Day celebrations.  The Murray Foundation Award was spent on T-shirts for all the members of the group and also a very welcome slap up meal for after we came out of the rainforest.  When asking my peers about the trip, Will M voiced the common opinion that “the trip was an incredible experience, giving us a chance to see two of the most unique and diverse places on earth”.  Huge thanks to the Murray Foundation to help make it possible for us all. 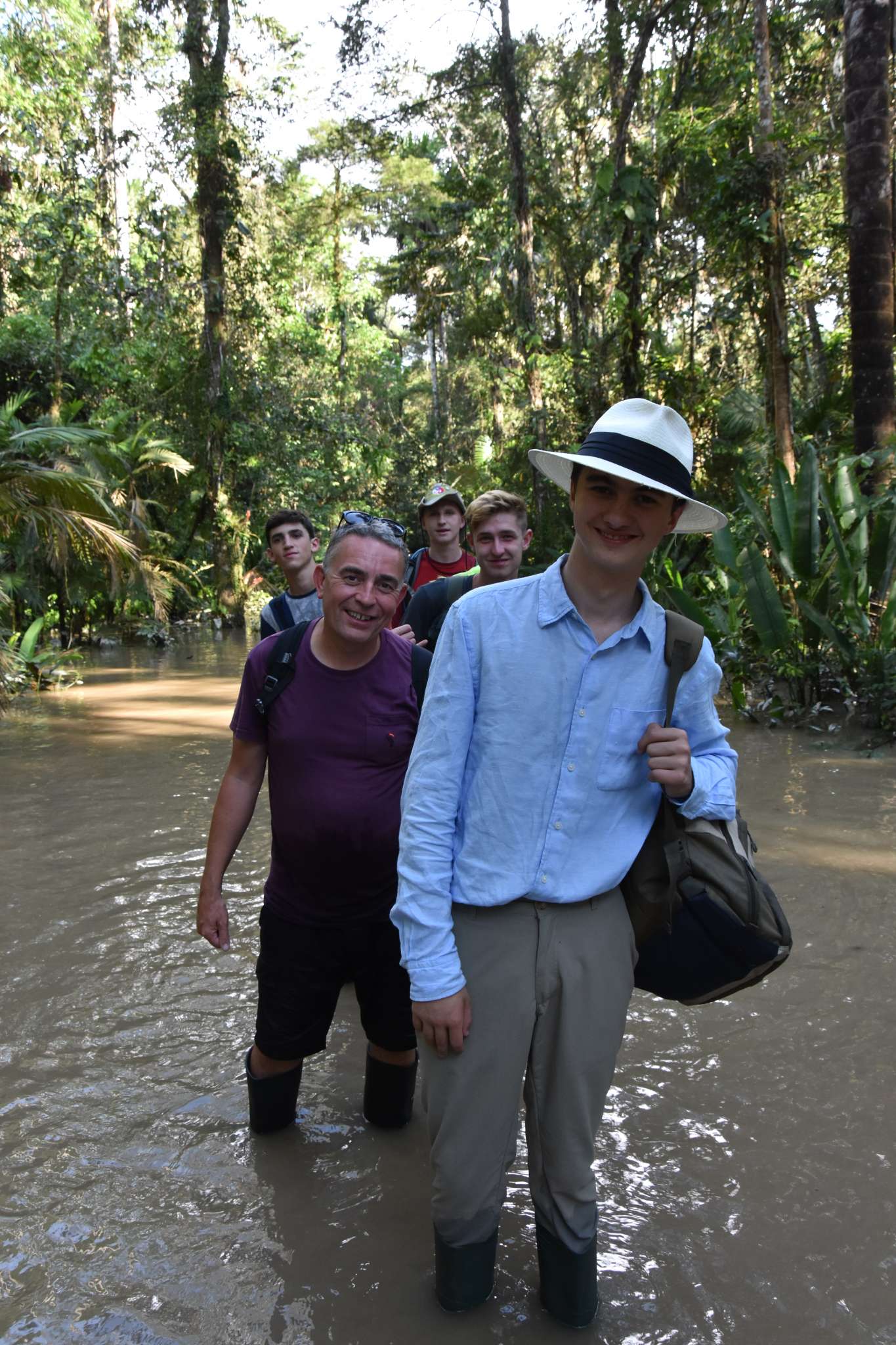 The 2018 trip began at Heathrow airport. The journey to Ecuador involved two flights overnight, and our arrival in Quito was met with much relief, however this was only the start of the journey. The following day we enjoyed a six hour stunning bus journey over the mountains and through the cloud forest.  This was the first indication of the natural beauty of the landscape we would be surrounding ourselves in for the following week. Having arrived in Coca, we boarded a speed boat that would take us for two hours down a major tributary to the Amazon, the Napo River. As the speedboats departed and I looked back at the rapidly-receding city I realised that this would be my last glance at civilisation for a week. During the last leg of the journey – a two hour canoe ride – we experienced our first taste of jungle weather, with a Biblical downpour that quickly soaked everyone and everything. It was then we learned that the area had experienced it’s heaviest ever week of rainfall and our adventures began with a walk through the rainforest to the camp on a boardwalk that was at least a foot underwater.  Luckily it was only one of our teachers, Dr Cue, who managed to get drenched by falling off the side of the underwater boardwalk.

When not working out how to dry our feet and clothes, the rest of our time in the Amazon was spent assisting various scientist with their data gathering.  We split into four groups, each with a rotating daily routine, with some early starts for bird watching from a Ceiba tree tower 50 metres above the ground, or tracking mammals along trails lined with camera traps, as howler monkeys and rare woolly monkeys raced through the canopy above you.   As Seb L said though it was “definitely worth getting up and going to the canopy tower to be surrounded by all those birds and monkeys”.  A highlight for many of the students was watching some of the camera trap footage that was collected with Sean – seeing jaguar on the trails that we had just walked was incredible.

One of the group’s favourite activities was wielding makeshift butterfly nets made from mosquito netting to great effect, catching butterflies of dazzling colour, using various guides in an attempt to ID them, and then pin them in an effort to create the first complete guide to the Butterfly populations of the area. There were also some fabulous herp collections…. One evening, having arrived back to camp after a tiring survey, Sophia, the camp leader, started running with two guides out of the camp with a snake pole and a large bucket returning with a three metre long giant bird snake in the bucket. For many of us this was our first encounter with an Amazon snake, and upon Ollie’s return from a survey we were able to see it properly. We were amazed with the composure with which Ollie handled the snake which repeatedly struck at him, it was the first of many encounters with the wildlife of the jungle. For many, including Harry M, it was the opportunity “to explore biodiverse and unique habitats with the help of knowledgeable and interested staff” that made the Amazon so special.  Caiman ‘hunting’ as an evening herp activity was hugely popular and again the skill and knowledge of the guides and Ollie was awe-inspiring. 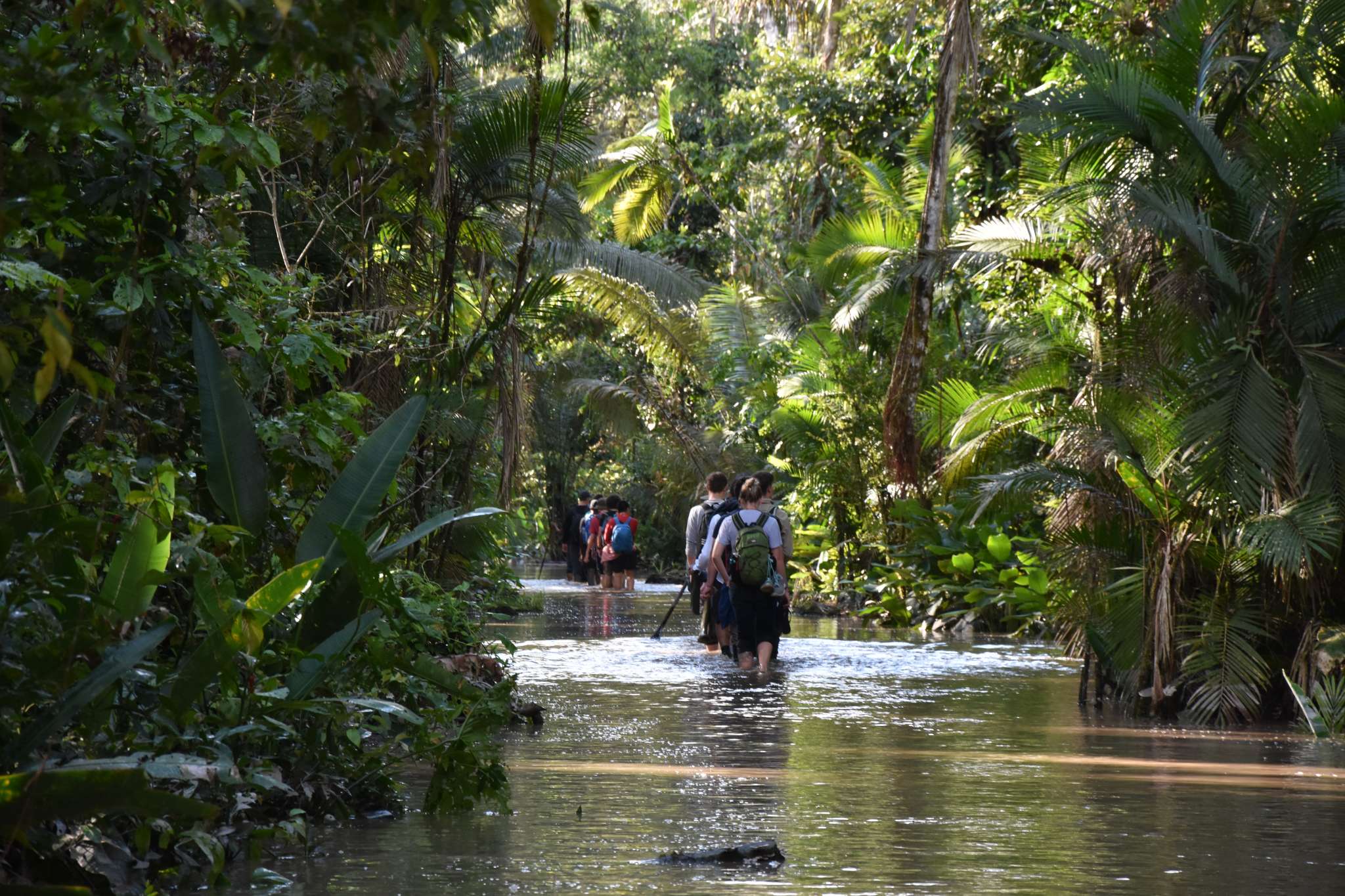 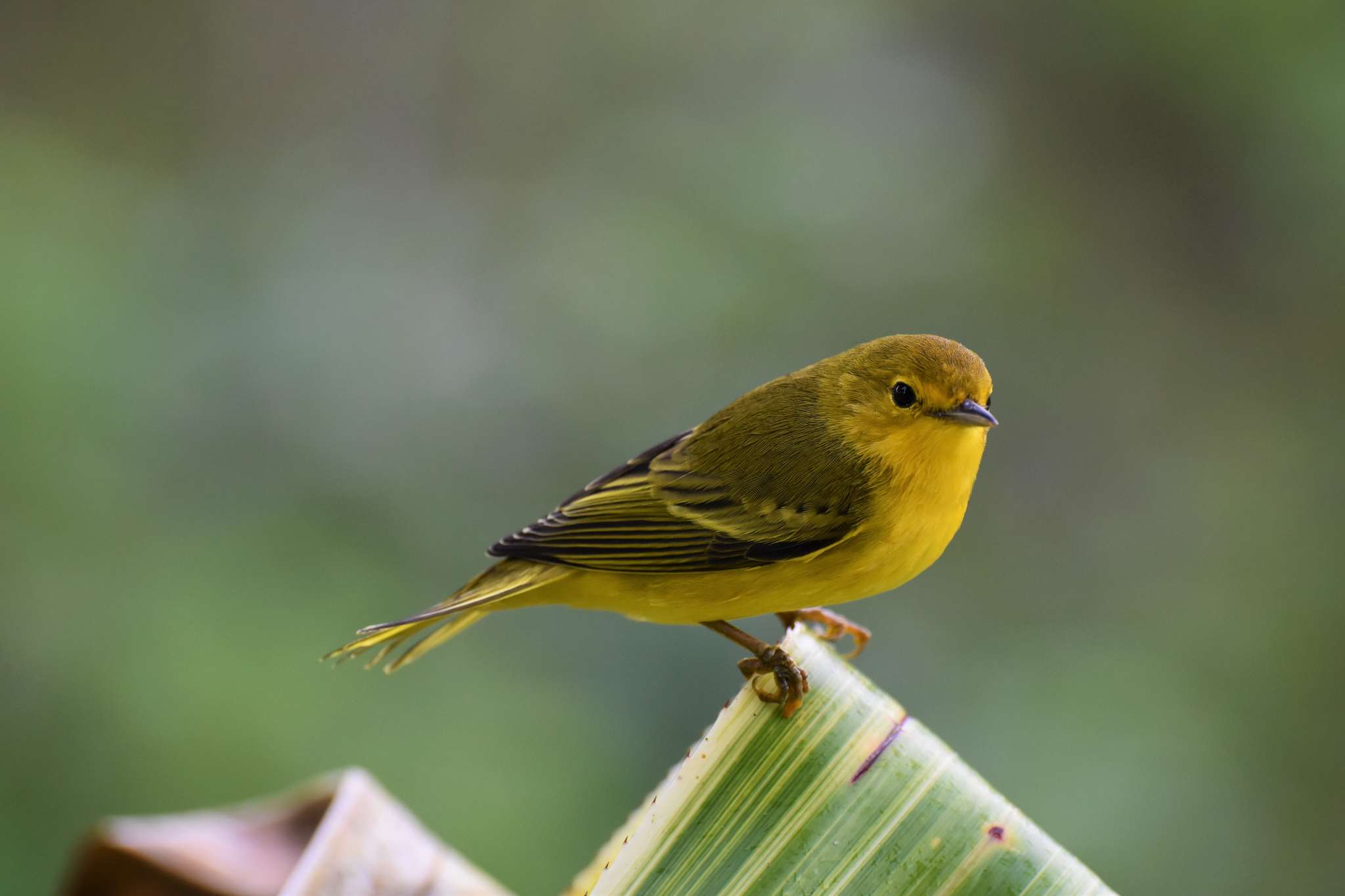 Some other encounters though were slightly less welcome; one of the biggest concerns shared by some in the group, (including one of our own teachers), were the notorious jungle spiders, including the tarantulas and the more dangerous wandering spiders. On the third night a group of us were returning to out platform that housed our tent underneath a thatched roof, when a stray headlight torch revealed a large, hairy tarantula above our tent, my own worst fear.  In an effort to overcome some of my fear, he was affectionately entitled ‘Terry the Tarantula’. The Opwall staff were great at allaying our fears though and as Olly F says “not only did I find the guides resourceful but I felt that they provided a homely warmth to each and every one of us. This allowed me to fully enjoy the environment that surrounded me as I felt so welcomed and prepared”.  It was so reassuring having the lovely medic Clare with us in the camp to moan about any of our aches and pains.  However, it was only our camp leader Sophia that actually had any unpleasant encounter during the week as she was bitten by a bullet ant, ow!

Our time in the Amazon was not only spent observing the incredibly vast array of wildlife, but learning about the local populations, particularly the Sani tribe, whose existence is a testament to the ability of local people, and conservationists to push against the oil companies who seek to ruin their lands. One day was spent by all students, visiting the community and helping them by planting a medicine garden.  It was lovely meeting the women of the tribe who ran the agricultural projects. It was an extremely enriching experience and for many it was an eye opener into our advantages. As James L comments, the trip was “an incredible opportunity to work with local people and scientists to help with their research in an effort to preserve the Amazon”. Our time in the Amazon grew to an end with a bittersweet mix of sadness, at leaving the scientists and jungle we’d grown to love, with excitement and apprehension for the next stop in our journey, the Galapagos. 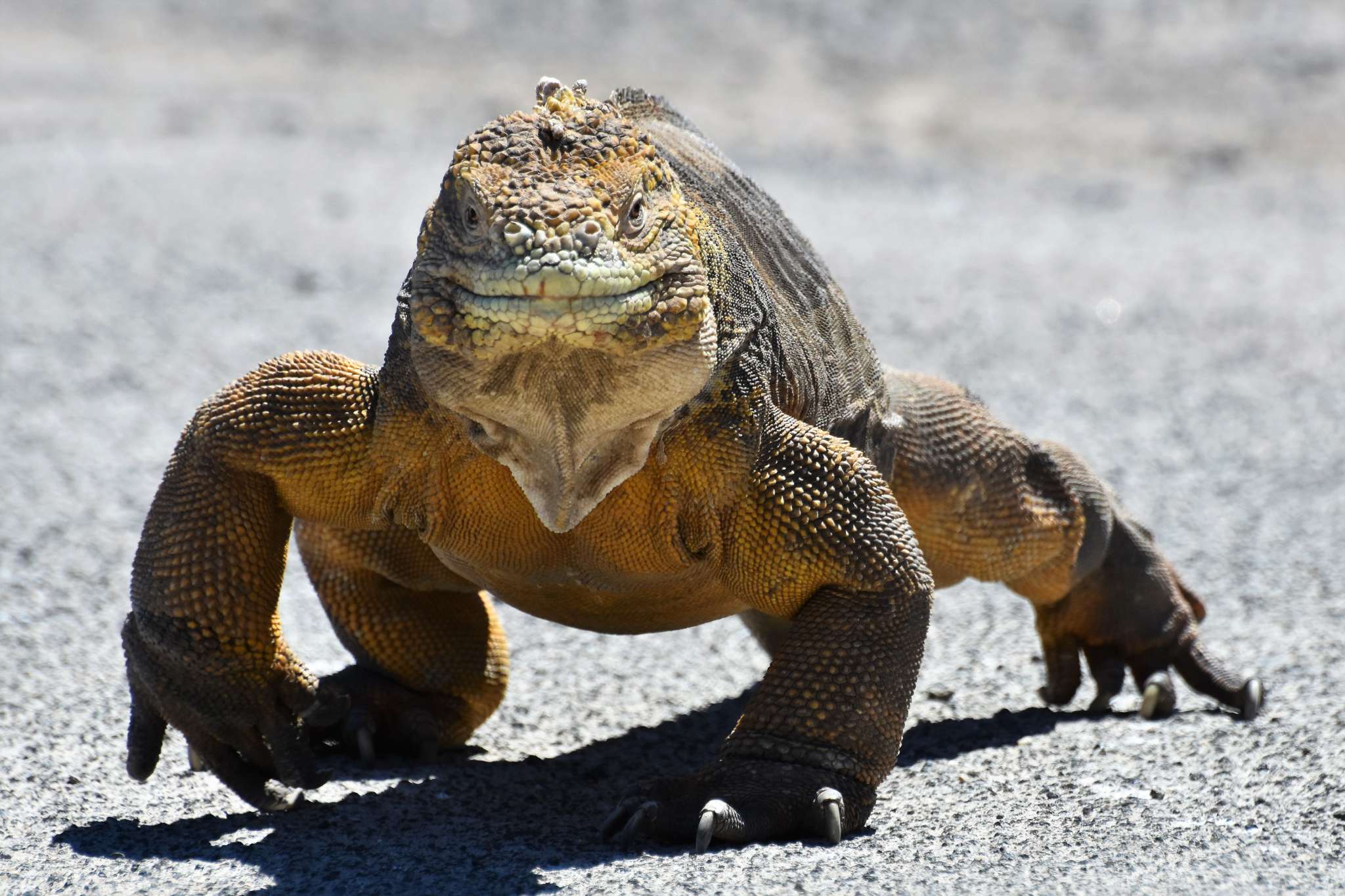 The plane’s descent into the Galapagos airport offered an aerial view of the tiny islands that appeared seemingly from nowhere in the middle of the Pacific Ocean. As we disembarked the plane we were greeted with an arid, rocky environment, quite the juxtaposition to the wet, humid and luscious rainforest we had just come from.  But as we moved towards the first location for our time in the Galapagos we noticed how quickly the environment changes with a few hundred metres of elevation.  We moved from the desert like conditions of the airport, exquisite beaches, through grasslands until we reached a more familiar wet highlands environment, which is where we would be camping again for the first half of the week. We were to hear more about his zonation as the week progressed.

For many the Galapagos offered the most exciting activity of the trip, snorkelling and scuba diving. For those of us who were qualified we were able to partake in two amazing dives. For myself, these dives were my first outside the UK and I was incredibly excited for the opportunity to see more than a cold Windsor quarry. We weren’t disappointed as on our first dive we were hit by the amount of fish, and other impressive marine life such as white and black tipped sharks, hammer head sharks and a school of spotted eagle rays. The second dive was an equally exciting prospect, we were told beforehand it was a frequently visited ‘cleaning station’ for green sea turtles and more white tipped sharks, a place which they could have their bodies cleaned of parasites by smaller fish. The biodiversity of the reef was astounding, the graceful silhouettes of the turtles that swam around us, and we were lucky enough to experience several up close encounters with them.  James was just one of many that “particularly enjoyed the various dives we did in the Galapagos and the opportunity to explore pristine marine life” and this included the chance to snorkel with sea lions. We felt somewhat clumsy in the water as a multitude of sea lions nimbly played around us but it really was an experience that none of us will ever forget. The lectures in the Galapagos gave us more insight into the history of the islands and an explanation into their astounding biodiversity and high levels of endemic species. These lectures were paired with group outings to places such as the Darwin centre and the lava tunnels of the island to further enrich our experience and learning.  The amount we learnt during our two weeks is what makes an OpWall trip fairly unique and as Olly comments “what stood out for me about this trip was not only the unique areas we went to, but the knowledge I gained”.

Our journey home brought with it the prospects of a real bed, home food, and of course most importantly for 23 teenage boys, mobile reception. We arrived back in Heathrow, after 2 weeks away, tired and considerably dirtier but having had the most incredible experience.

Felix sums it up well when he says “this once in a lifetime trip was invaluable in the learning and experience it provided. I was overwhelmed by the entire two weeks – being able to see the wonders of the Amazon and the beautiful nature of the Galápagos Islands. Not only was I able to learn about the endemic species of the various biomes I visited but also the cultures of the local indigenous peoples and the ecological problems faced in the areas”.

Thank you Operation Wallacea and the Murray Foundation 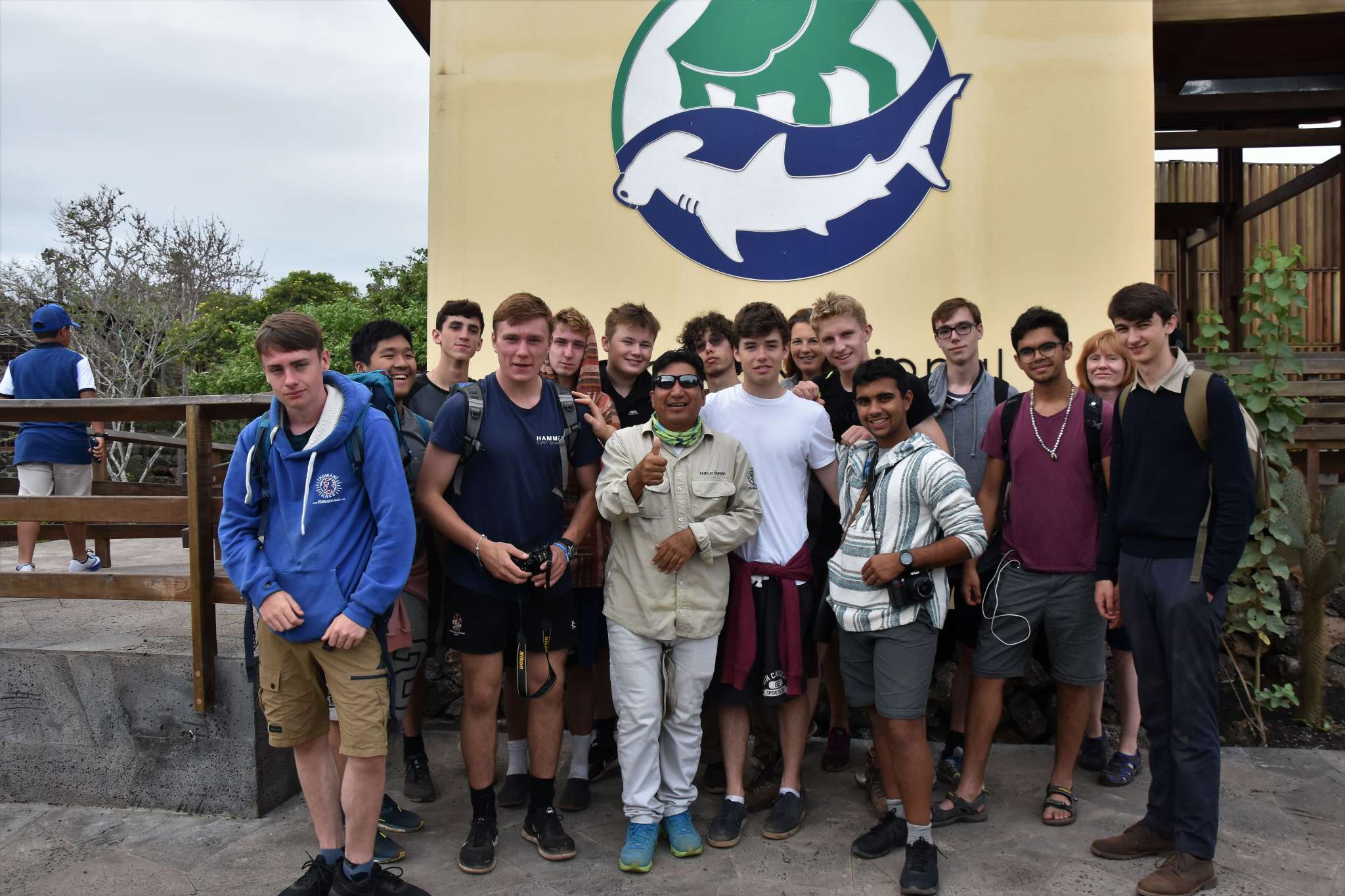