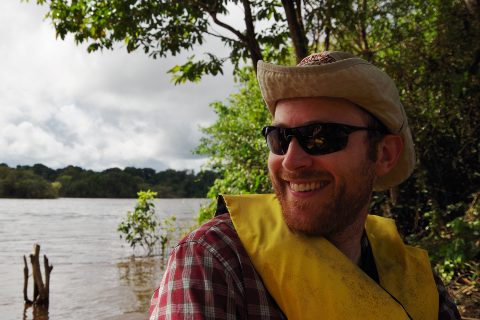 Scott Sveiven is the Director of Opwall’s US office and the Country Manager for our Guyana expeditions. Originally from Minnesota, Scott started travelling the world and exploring his passion for wildlife biology from an early age. He went on to become a biologist, studying dual master’s degrees in conservation biology and environmental policy, then teaching at a forestry school in New York state until he found his way to Opwall.

Over the past decade, Scott has built and shaped Opwall’s research efforts in Guyana, a country that still retains 87% of its forest cover. Since Opwall has many camps in Guyana, we will focus on one site in particular. The Iwokrama International Centre for Rainforest Conservation and Development, which works with indigenous communities to protect the forest through several different mechanisms.

In this episode, we discuss how Scott became passionate about conservation and forestry, challenges of working in the field at one of our remotest sites, and what we’ve learned in 10 years of running research in Guyana.