Bringing in two school groups at a time always makes for a bit of an interesting social experiment. Sometimes, the two mix like they had always known each other. In other cases, they leave a full empty table between each other at meal times. However, at the end of five days at a tiny camp, it’s hard not to become curious about the others around you.

Our group for week three turned out to be half Spanish and half American, nineteen of whom were girls (and just one boy!). The biggest concern, especially for the female staff, was how we would ever get a turn in the bathrooms. It was occasionally a bit of a traffic jam first thing in the morning, but we were pleasantly surprised to see the girls quickly adapt to how many people needed to come through. Our lone male student, who luckily spoke Spanish, struck up a rapid friendship with the guides and made no fuss about the strong female presence at camp.

Despite being rather wary of each other at the beginning, the groups were similarly plucky, intrepid, and eager to help the scientists and guides alike. On our way back from the cultural day in the local Sani community, the usually tough row back to camp was made much lighter by dozens of students volunteering to help out. Our guides, exhausted and covered in mud from their soccer game, happily passed over the paddles and enjoyed the ride as Spanish and American students rubbed shoulders to help us maneuver the canoe back to camp. We may have inched along, but we were entertained constantly by several groups of squirrel monkeys climbing the trees around us. One of them even jumped onto a branch right above the boat! 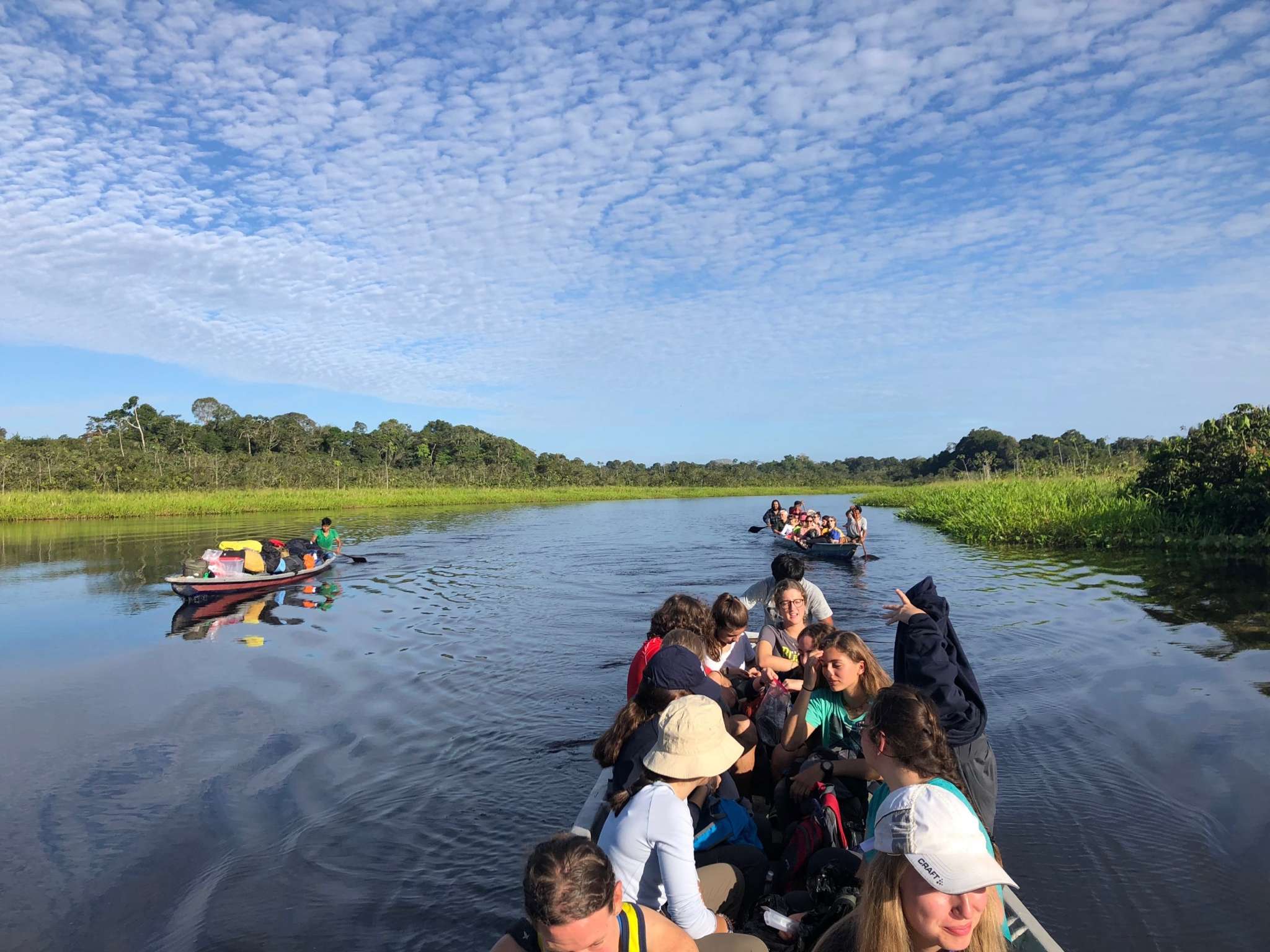 The goodbyes were particularly tearful this week since we had ten new translators helping all the students converse more fluidly with our Sani guides. Many of the students expressed interest in volunteering to teach English in the community where they are currently building a volunteer house, and in creating a drive for schools supplies to help Sani students get what they need without depending on oil company money.

In an intense eight-week season, most Opwall staff do not expect to get a week off. Serendipitously, we had no students booked for our fourth week this season, so we set off to enjoy parts of Ecuador that we would not see otherwise. Although we were excited to dry off our clothes and get the mold out of our backpacks, we expected we would miss the rainforest as soon as we left, and we were right.

On the first day back, a few of us explored the old town of Quito, ambling around cobblestoned streets with colorful colonial houses and an imposing slate-gray Basilica. We hiked, breathing heavily in the thin mountain air (Quito is at 4000 meters of altitude), to a lookout at the “Angel of the Apocalypse” and took in the sprawling city whose sounds and smells overwhelmed us after spending three weeks in the deep Amazon. Besides accidentally ordering a chicken foot soup for one of our vegan scientists, we had a quiet day to unwind after the long travel day from the jungle.

The following morning, we set out early to visit the Quilotoa lagoon to the south of Quito, where we would hike into the hollow crater of a dormant volcano. The long, winding drive was made immediately worth it when all the scientists peered over the edge and gasped in unison at the glittering turquoise lake nestled between sharp mountain peaks. As errant clouds drifted over the alpine waters, the water became mottled in a thousand shades of blue and we could not wait to scamper down the steep path to leap into the frigid lake. Almost everyone took the plunge, then immediately crawled out of the cold. Remember, this crater is in the high Andes at around 4800 meters of elevation. However, our vegetation scientist, who frequently surfs in Southern Ireland in the winter, could not get enough of the brisk water and swam around as comfortably as if it had been bath water.

We took a surprise trip to the beach, visiting northern Ecuador about six hours from Quito. The salty water healed our mosquito bites and the days were filled with beach volleyball, sliced mango, and coconut ice cream from the ambulant vendors. In true Opwall fashion, we all went on a herp walk one morning by the small river banked with mangroves, but were saddened to see the local river clogged with trash, and no herps to be found. The loud clubs and bars at night across the street from our hotel, as well as the plastic trash found all over the beach, reminded us how lucky we were to be in the middle of the untouched rainforest at camp. I think by the second day all of us were ready to battle mosquitos again if it only meant heading back into the beloved jungle.

On our final day, we enjoyed the thermal baths of Papallacta, dipping into the steaming waters in the middle of the misty Andes. It seems that visiting the warm baths is a popular family activity for local Ecuadorians who had flocked to the pools on Sunday afternoon for a bit of healing. After lunching on local rainbow trout, most of the scientists spent the afternoon catching up on final emails before heading back into the wilderness for the second half of the season. We could not have felt more energized and ready to head back into the jungle, which would welcome us with torrential downpour the day we arrived. If we had managed to get the mold out of our clothes, the jungle would put it right back as soon as we came back.

Our biggest week of the season was also one of the most fun. With three different schools, two from Toronto and one from New Zealand, we had our hands full with large groups going out on survey with each of the scientists. That number was magnified by the fact that the students this week were particularly curious, often hopping onto the night surveys even when they had the night off. On one evening herp survey, we had thirteen students – five extra! – following behind our herpetologist, Ollie, as he pointed out frogs on the nearby vegetation.

We were lucky to have a stunning and clear week, with the stars and Milky Way making an appearance almost every night. The students were thrilled to lie out on the boardwalk and watch the night sky after coming in from survey, although they remained quite separated by school throughout the week. The students from New Zealand in particular were eager to befriend the scientists and learn more about their passions; a few of the girls even expressed strong interest in joining an Opwall expedition as staff members after university! 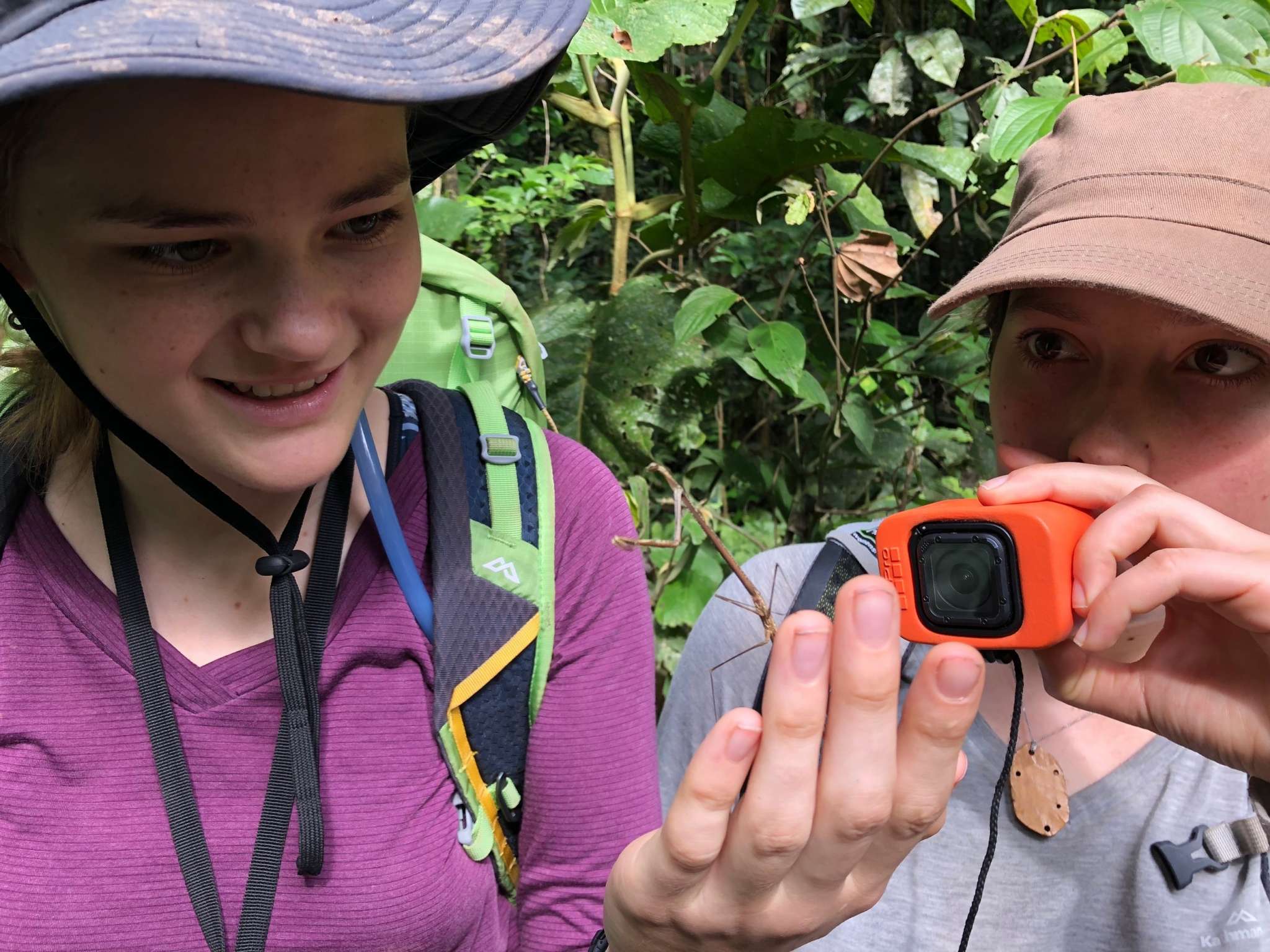 We had a few highlights on surveys this week, including the discovery of a smooth-fronted caiman (Paleosuchus trigonatus), the first to be spotted in the Sani Reserve, by one of the students during a nightly herpetology survey on the transects near camp. Although the caiman was just over a meter long, it unfortunately delivered a nasty bite to Ollie’s thumb; luckily, our medic happened to be tagging along for the survey and the rest of the walk went on as planned.

Our vegetation team also enjoyed herpetological discoveries while out on a canoe survey of the flowering plants in the lagoon near Sani Lodge. Éadin, our vegetation scientist, was taking students on the once-weekly survey to identify and press plant specimens of the lagoon, when we found a stunning reticulated clown frog (Dendropsophus reticulatus) tucked into a reed. With the help of one of our local guides, we were able to bring back the frog to be photographed at camp. The survey itself was also a stunning success; we were able to collect twelve new specimens with flowering parts, even after five weeks of surveying the same river transect. On the cultural side as well, many of the students engaged intensely with the topic of indigenous resistance to petroleum development in the Sani territory because of their close ties with the Maori people in New Zealand. After a lecture on the importance of community-based tourism in Sani as a method for conserving their territory, several of the students who had Maori heritage or felt strongly about the issue made a point to sit down with Frankie (our cultural consultant) and I to discuss how New Zealand has dealt with similar issues. While our expedition is biology-focused, the cultural component of working in the Sani Reserve cannot be overlooked, and it was exciting to have a group so tuned in to the issues of working closely with indigenous communities within their traditional territories.