I heard about Operation Wallacea from one of my College Parents who was attending a talk. After looking at all the available expeditions, I decided that I was most interested in joining the Cuba research project, the only exclusively marine site. I have always been interested in marine conservation research so I felt that this would be a great opportunity. I would be volunteering as a research assistant and aiding researchers from the University of Havana with their conservation research efforts on the Isla De La Juventud, in the Punta Frances national park.

The cost of the expedition itself, let alone flights and other extra costs, was going to have to come from a lot of hard work and fundraising. Fortunately, I was able to apply for a travel bursary at college and subsequently received a generous sum from Josephine Butler College, which was a fantastic in fundraising for this project. I also started making a range of crafts and baked goods for various fairs around Durham, selling at car boot sales and taking extra shifts at work to help pay for this, not to mention filling out what seemed like hundreds of bursary forms for various conservation funding organisations.

The Cuba expedition focuses on the conservation of marine wildlife and habitats. With over fishing and coral bleaching a big issue across the world, I was not surprised to find that this was also the case in Cuba. However, the Caribbean also faces danger from introduced species such as the lionfish. Lionfish are an incredibly invasive species in the Caribbean; they most likely came to the area in the ballast tanks of ships. Their graceful looking fins harbour highly venomous spines, the toxicity is a natural deterrent to potential predators and so the species has proliferated rapidly in the Caribbean.

The first week of the expedition involved completing the PADI Open Water course to become a qualified scuba diver. As I had already begun my referral training in the UK, I only needed to complete the final open water dives. After completing my first two dives confidently, I was diagnosed with a barotrauma, the change in pressure had burst a capilliary in my ear- I wouldn’t be qualifying anytime soon.

With diving out of the question, I spent the remainder of the week snorkelling- but that didn’t mean missing out on spotting reef organisms! After nearly swimming into a great barracuda, I managed to identify some reef mega fauna including a green moray eel and a southern stingray- as well as an abundance of trigger fish! 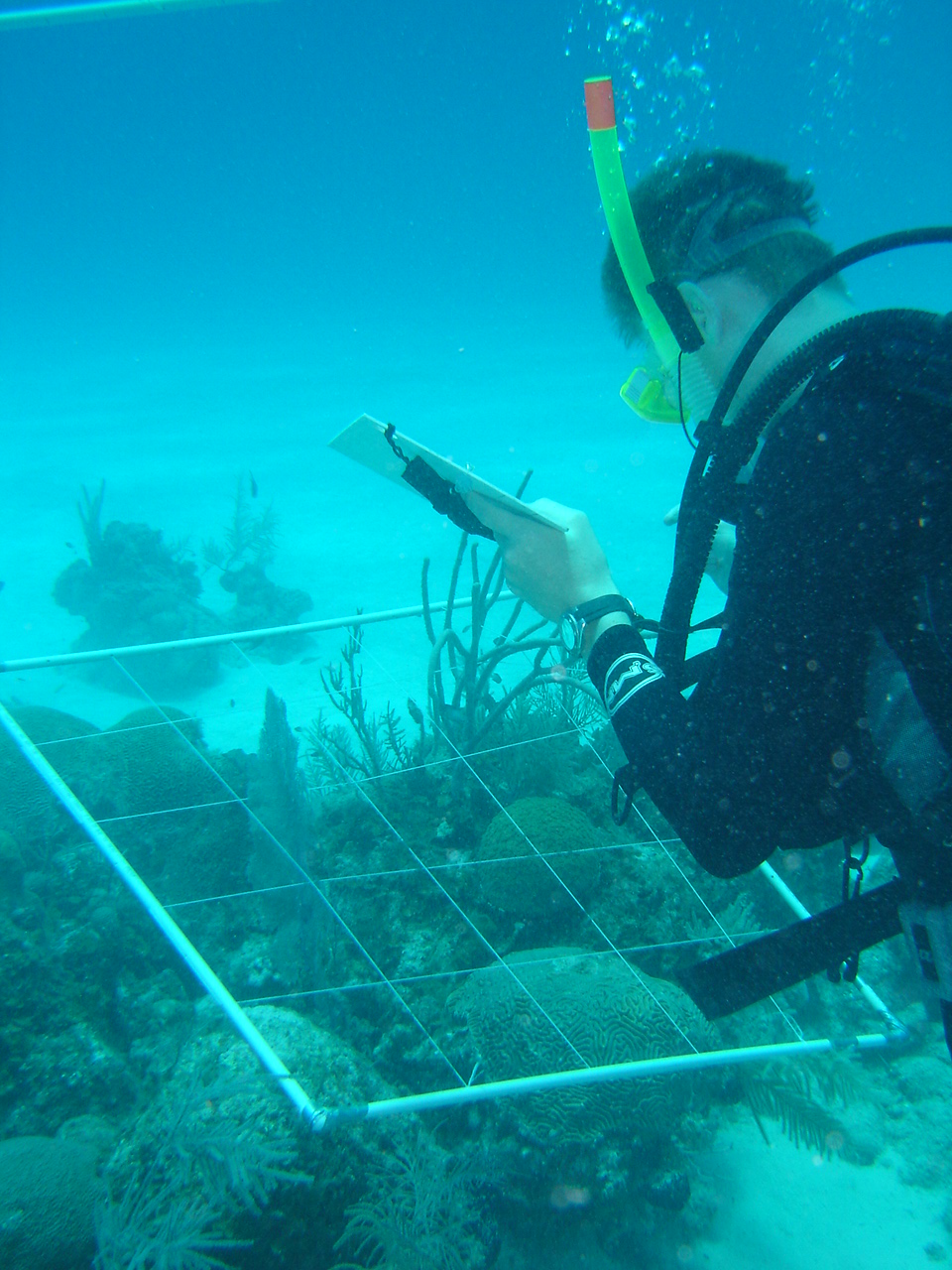 After a day of diving, evenings were spent in reef ecology lessons. These lectures entailed learning how to recognise various species of fish and coral as well as the effect of climate change on the delicate reef ecosystems. The presentations particularly focused on human impacts on Caribbean reefs as well as highlighting the effects of other organisms on the structure of coral reefs, such as increased algal presence preventing new coral growth due to the decline in sea urchin (Diadema sp.) populations.

The second week consisted of two day taster sessions for the research projects that we would be conducting in the following weeks. As I still had my barotrauma- I transferred into the manatee group for most of the week. The manatee research project not only involved participating in manatee transects, but also surveying bonefish and tarpon in the area. To do this, we were taught how to fish and then how to measure, photograph and release the specimens safely. In order to find some of these fish, we had to pair up and kayak through the mangroves as it the waterways were too narrow for the research vessel, this lead to a lot of lures stuck in trees! The group managed to catch a cero fish and a huge great barracuda, but none of the species we were looking for. Eventually, I was lucky enough to catch the first bonefish of the season!

Manatee captures were conducted on Wednesdays; because I was unable to participate in the lionfish sessions during this week I was able to accompany the group on their capture day. We were all given roles, from taking various measurements to keeping the manatee calm. My job was to collect swabs from the dorsal side of the animal as well as collecting a small skin sample from the peduncle. Unfortunately for us, due to the hunting of manatees, they are very shy and difficult to capture, and so we were unsuccessful in our efforts. 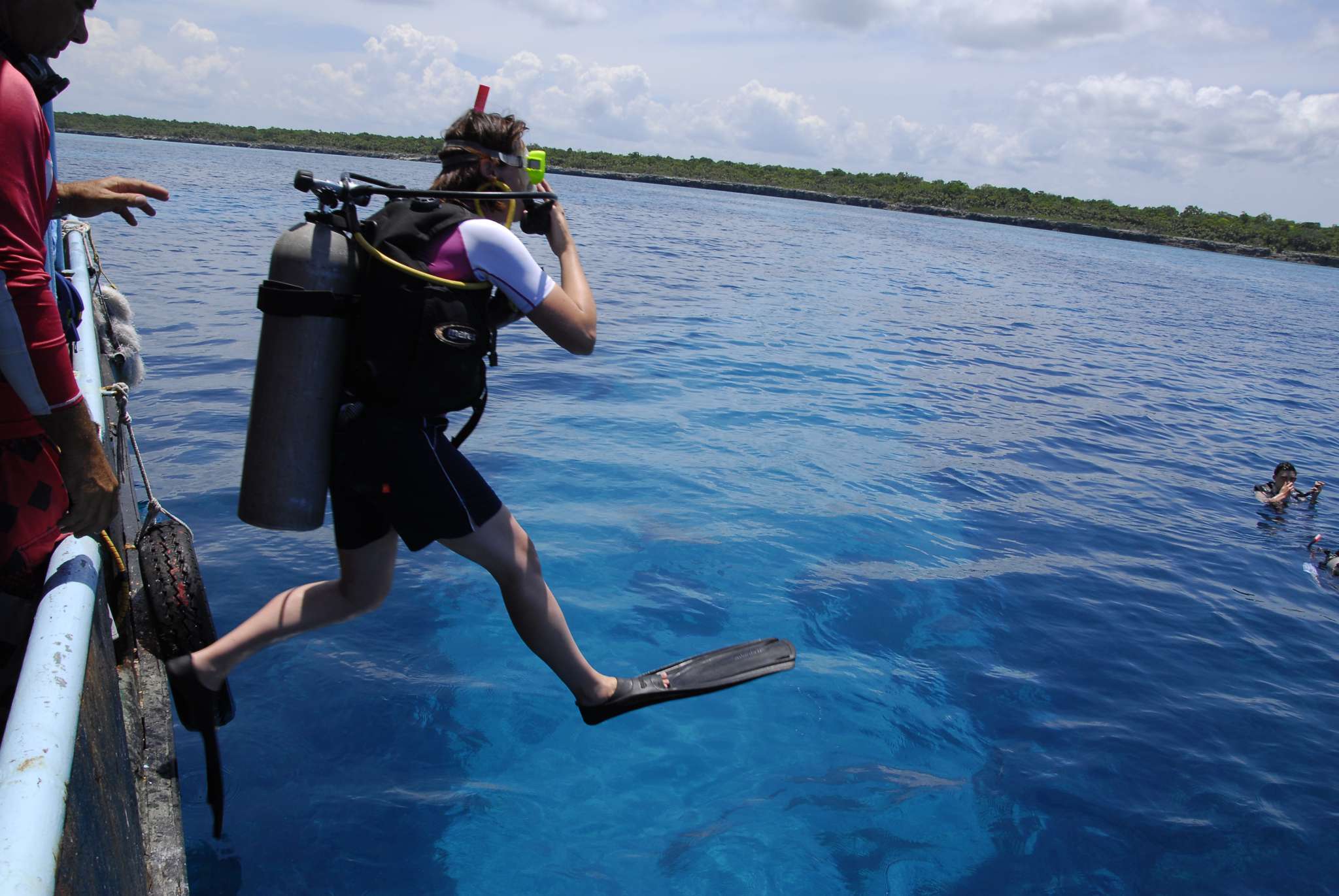 Our fish ID sessions involved dragging nets through shallow waters and collecting specimens of interest. They were then taken back to the seminar room to be identified and photographed. The aim of this exercise was to collate a catalogue of species in the area. Identifying the specimens was difficult, as many of the local species are very similar in appearance and look very different during the juvenile and adult stages!

In the final two weeks we started to specialise within each project. I finally recovered from my barotraumas, meaning diving was possible again, but before I could participate in the rest of the research projects I had to do a final qualifying dive- which went without a hitch! It felt amazing to finally be able to say I was a qualified diver after so many setbacks. My first dive as an official PADI Open Water Diver involved taking line transects of the reef. I got to use a stereo-video camera to take videos of the reef for analysis. The project also included dives to collect lionfish for research. They are destroying the local ecosystem and so these studies are a means of preserving the native marine life by finding effective ways of managing the reefs.

During this week’s fish ID sessions I helped our research expert edit the specimen photographs to make sure they were of a high quality for the catalogue. We continued capturing and photographing native specimens as well as identifying them. We also started to analyse our footage from the stereo-video cameras which involved using software to record size and species using a known database. This was made more difficult by the absence of red light at the recorded depth, so everything looked like a blue shadow! Thankfully the Cuban staff were fantastic at helping us to recognise these species, so hopefully we are now experts! We also watched back the Fin Print footage in order to identify any rays or sharks caught on camera. We spotted a green moray eel and were beginning to lose hope until we finally caught a glimpse of what we thought was a nurse shark!

After analysing Cuba’s fish species it was back to the manatee project. There was no such thing as a typical day on the manatee research vessel, Neptuno, some days we would attempt to catch tarpon and bone fish and other days we would set up nets to collect fish to bait the Fin Print project cameras. With our captures being unsuccessful, we decided to try and find manatees in the lagoons ourselves. Someone saw a huge splash, a tell tale sign of a manatee- it was tense as we all surveyed the water but it was all worth it when we saw another splash and a glimpse of the tail!

Although my overall experience was once in a lifetime, it did shine a light on the hardships facing those working in conservation and ecology. Trying to scrape the funds together to participate in this experience was difficult for a start, I was lucky enough to receive a generous bursary from Josephine Butler College to help pay for my travel costs, but for some researchers this sort of funding is hard to come by. Once on expedition, things don’t always go to plan- for example the research vessel from the University of Havana was in dry dock, meaning that shark tagging would be impossible this season. There was hope in the form of the Fin Print project- however due to El Nino many sharks had been driven into warmer waters, so capturing a nurse shark on camera was exceptional. Sometimes, even when everything goes to plan, the organisms aren’t always willing to participate- this could not be summed up more than during our time on the manatee project where- aside from a splash on the last day- we did not see or capture a manatee. It has definitely helped me gain some valuable work experience and given me an insight into work as a marine conservationist.

Overall our work with Opwall will be a great step forward for the conservation of Caribbean reef organisms. We have gathered valuable data for the University of Havana which they can use as evidence and research for future and current marine conservation efforts in Cuba. Hopefully our work will help to make a difference in the protection of the habitats and organisms that we studied.