That afternoon myself and fellow staff Fred and Alberto set off from camp with Joto, the projects Biodiversity Coordinator and Croc team leader, at 3.30pm for a hike where at the end, was a remote aguada where we hoped to find crocs! The sign-out board in the science room under ‘Croc Team’ read as follows “Time out 3.30pm, return 4am” – it was going to be a long night!

The first kilometre of hiking was through familiar upland forest, composed of tall trees, abundant saplings and vines, as well as dense ground vegetation. After perhaps 5 minutes of walking we reached a more open area of forest where I noted a sudden change in incline. A few moments later we were passing over an ancient Mayan ruin sight, which to the untrained eye, would have appeared simply as a large mound of stones and boulders.

After departing the ruin site the trail took us down a short but steep scramble down a rocky slope, after which we found ourselves in yet another kind of forest. This was ‘Dry Floodable Lowland Forest’ which in contrast to the upland forest appears barren and devoid of life; the trees are shorter and appear more brittle here, invariably armed with sharp spines seemingly eager to impale passers by. The ground was also incredibly parched; it felt and sounded as if we were walking on crispy cornflakes! Being a floodable lowland there was virtually no ground vegetation, instead a carpet of dead leaves lay silently on the ground from the thorny and sun baked trees above.

We picked up our pace now that we were in a more open environment, and for the next 4km we hardly broke stride as we made good progress despite the heat and lack of canopy to protect us from the suns rays. Eventually, we entered yet another kind of habitat which reminded me strongly of the Rupununi savannah in Guyana, seen on my previous expedition with Opwall. Trees had now been replaced by gnarled and twisted bushes and yellowish brown grasses towered well above head height (or Joto’s neck height!). One could easily have believed that they were walking through the African bush! Indeed, as we now quietly continued on our way down a well worn tapir trail, seeing the frequent piles of dry dung left by them, I couldn’t help but feel as if we could round a bend at any minute and come face to face with an angry herd of buffalo!

As we neared the aguada we started to walk more slowly and reduced our noise underfoot to a minimum; Joto told us that this was an excellent place to see tapir and that he had seen them twice here in the past while conducting croc surveys. Unfortunately, there were no tapir in sight upon our arrival, although we did immediately spot the head of a decent sized morelet’s croc out in the middle of the beautiful aguada before us. 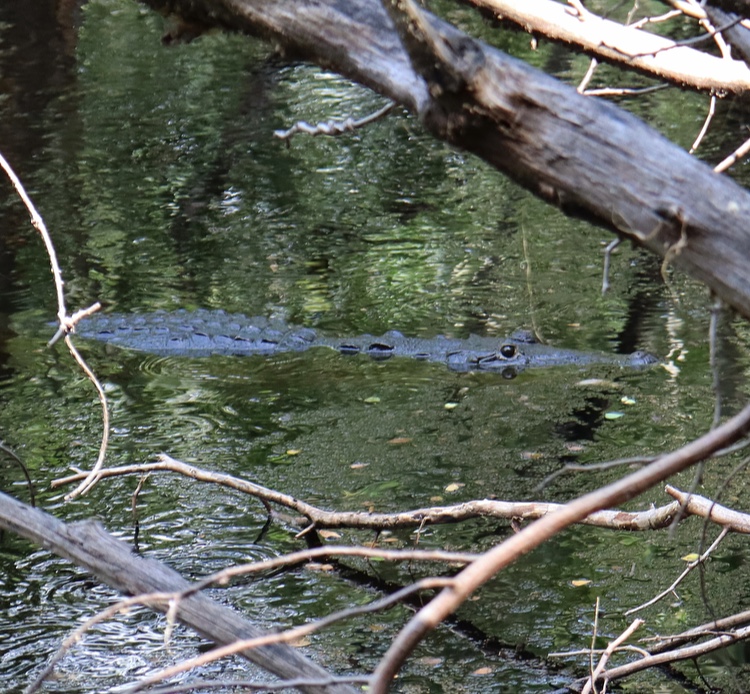 As we had smashed out the 6km hike in only 70 minutes, we had plenty time to relax and explore the area before dark, when croc work could commence! While Joto went to bushwhack and mark a trail to another aguada around 1km away, myself, Fred and Alberto explored the vicinity. We spotted two crocs in the aguada, both of reasonable size and also found more sign of tapir around the margins. Later at around 6.30pm, while chilling on the tarpaulin we had laid on the ground to sit on (to avoid ticks and chigger bites), we enjoyed a viewing of a large speckled racer as it cruised by on its search for frogs.

Joto returned at around 7.30pm and we were soon all laughing and chatting around a small fire snacking on cereal bars and spiced peanuts as we awaited nightfall. To an outsider we must have appeared an odd and somewhat unlikely group; a Scot, Mexican and two Portuguese sat around a fire listening to Gaelic music in the middle of the forest with a croc noose laid out on the ground!

Disappointingly, we had no luck with the two crocs in the first aguada as they were simply too wary and refused to come in close enough for us to attempt to noose, despite our best efforts utilising a baby crocodile distress call and splashing enticingly in the water’s edge.

Moving on to the second aguada, the time now around 10.30pm, we immediately spotted the eye shine of yet another croc! I followed Joto carefully as he prepared to get closer, carrying the rolls of tape in order to bind its jaws in case we were successful in capturing it. Annoyingly however, the 1.5m croc actually made a predatory lunge for the noose thinking it was food, forcing Joto to return to shore in order to reset his noose! On Joto’s second attempt he was successfully in slipping the noose carefully over the crocs snout, but it had other ideas! In an explosion of aguada water the crafty croc managed to avoid capture once again by shaking the noose clean off! 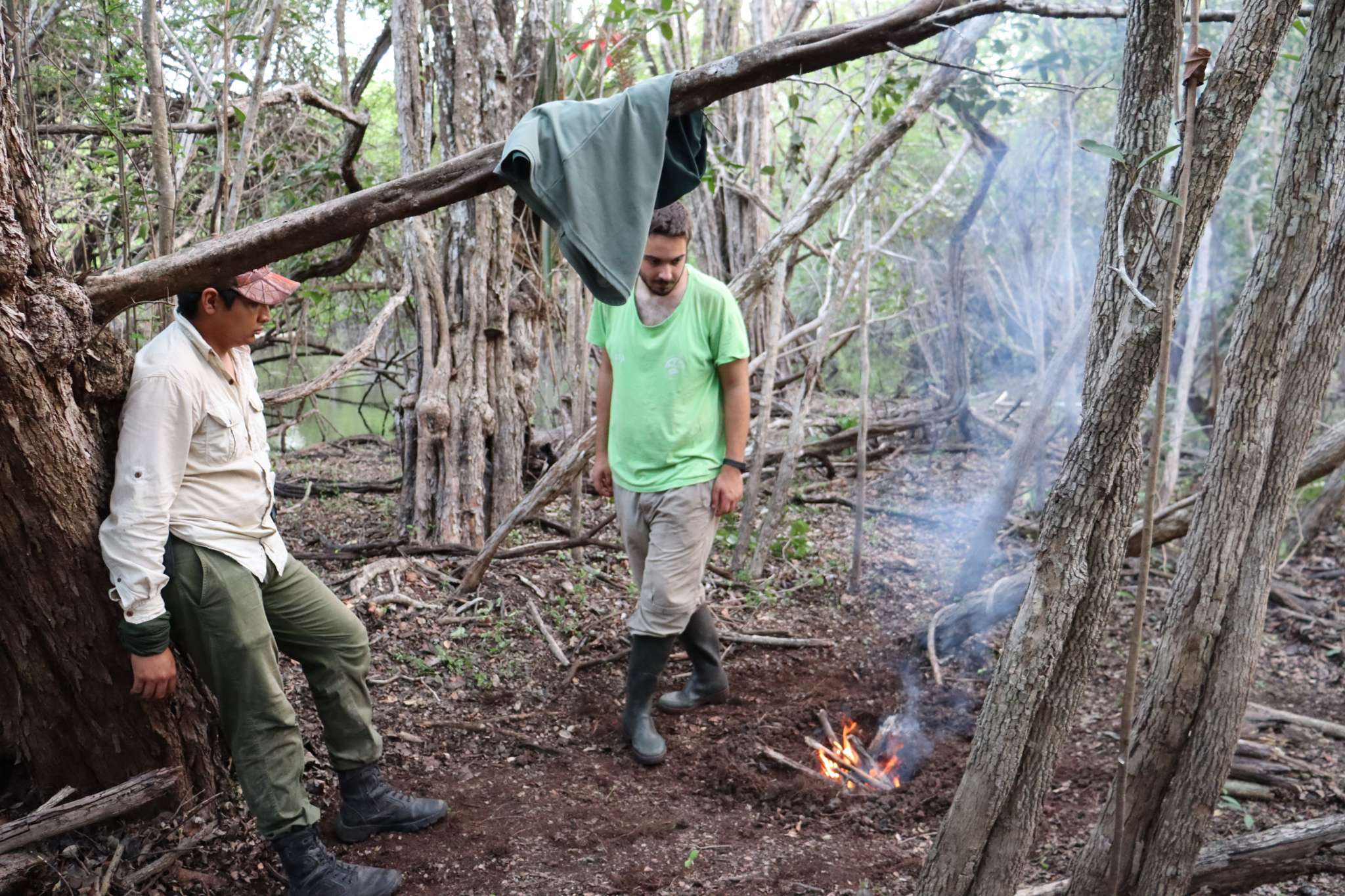 After a further 20 mins of searching with our head torches, we were finally able to spot the orange glow betraying the presence of the same crafty croc once again. By this stage it had become far wiser and had sensibly decided to park itself right in the middle of the aguada, surrounded by a mat of water lettuce and a maze of sunken branches; the worst possible place to catch it! Over the next half hour or so Joto did a valiant job attempting to reach the croc, wading out into the muddy aguada water well over his waist, clambering over sunken logs and forcing his way through thick, aquatic vegetation. In the end however, the croc gave us the slip…

After a final failed attempt to lure in the crocs back at the first aguada, we decided to call it a night and packed up our gear, before setting off on the long hike back to the truck and eventually camp, where hopefully four plates of spaghetti and cheese were waiting for us!