Croatia – What a Catch!

While the mist nets we use on the Operation Wallacea Croatia project are designed to catch smaller song birds, it doesn’t mean that we can’t catch bigger birds too! Although many of the larger species don’t entangle as easily thanks to their body size, they can still be stopped by the mist nets if they fly into them. While they do tend to let themselves out, on occasions, we are lucky enough to be checking the nets at the perfect time and can get our hands on them before they escape!

On our very first morning of mist-netting for the 2022 season, this was exactly what happened!

It was really early in the morning; the sun hadn’t yet poked its head above the horizon but already the birds had begun to sing their dawn chorus. We had mist nets set up throughout the maze of juniper bushes and stone walls that characterize this Mediterranean landscape.

As we rounded the corner to check the nets, we stumbled across a commotion! With the light of our head torches, we could just make out the silhouette of a large grey bird, swimming along the middle shelf of our net!

We started running (as best we could), picking our way through the holes and rocks and small spikey bushes – anything that might cause us to trip and miss our prize!

I’m sure we’ve all had these moments – when you’re not sure exactly what it is you’re after – but you just know it’s gonna be good! This was certainly one of those moments for us.

And what an exciting surprise to reach the nets and pull out a Common Cuckoo, mere inches from the end of the net! We were just in time!

After finishing our “net check” it was time to start measuring and examining the bird, not just to confirm the species identification, but also to deduce its age and sex based on its characteristics, as well as infer its body condition, breeding status and other interesting parts of its story to give us information on the demographics and behaviors of bird populations in this area.

Based on its plumage and pattern of feather molt, we were able to confirm the bird we had caught was an adult male. Cuckoos are an interesting group of birds because they are long-distance migrants, making an annual movement between Europe and sub-Saharan Africa where they spend their summers and winters respectively. Cuckoos are also known for their parasitism when it comes to breeding: the adults will lay their eggs in the nests of other bird species without their knowledge or consent, and these proud parents will raise the cuckoo chicks as their own – even though they grow to huge sizes and look very different to the chicks they might have expected to hatch from their eggs! 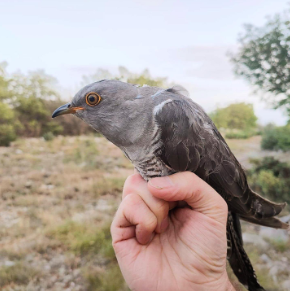 For us, the most incredible part of the cuckoo story is how it knows to continue this. After cuckoo chicks are raised by parents of a different species altogether, they still seem to figure out how to migrate thousands of miles back to a sub-Saharan wintering ground they’ve never experienced… and when they mature, how to find the right kind of bird to deceive and lay their own eggs in its nest!

So, it was an amazing experience for the students to be able to hold one of these birds in the hand and learn about their story from such an intimate perspective!

This weekly blog was written by Operation Wallacea bird team member, Susie Stockwell, author of #itsawildlife, a blog and podcast to support young ecologists working their dream job in wildlife conservation. You can read more at: www.itisawildlife.com