Aguadas, Crocodiles and the Mayan Jungle – PhD adventures of a Portuguese biologist in Mexico

Pursuing a career in crocodilian research and conservation has been a bumpy ride. But that is what I am passionate about. From a very early age I knew that I wanted to “run off to the tropics” and be involved in tropical research. Inspired by wildlife documentaries and fuelled by my inner cravings for adventure I dreamed of a chance to be able to explore this amazing world depicted on the screens. Luckily, in the final year of my bachelor’s degree I got the chance through my university in Portugal to go on an interchange program and spend a year in the Brazilian Amazon. From that moment I knew that I would want to spend as much time as possible exploring and conducting research in the tropical world overseas.

After joining Operation Wallacea’s project in 2014 as a herpetologist in Mexico, something inside me connected to the culture and the environment and my academic mind set roots in this fantastic place. Mexico is one of the most biologically rich countries on the planet and the Yucatan Peninsula is one of the most recognizable parts of Mexico. This region is well known as one of the significant areas in Mesoamerica that supported the Maya civilization, as evidenced today by several important ruins located in such places as Chichén Itzá, and Calakmul (where Operation Wallacea’s project is based). The region of Calakmul is home to the largest expanse of mature, seasonal tropical forests remaining in Mesoamerica. Unlike most of the forest in the Yucatan Peninsula, the forest in Calakmul Biosphere Reserve (CBR) has not been used for large scale timber production nor has it been burned for farming and ranching. As such it is one of the last remaining stands of virgin forest in Mexico, being classified by UNESCO as World Heritage Site of Culture and Nature (UNESCO 2014).

Calakmul is a unique and outstanding place. The limestone soil base structure causes rapid filtration of rainwater, preventing the formation of major sources of permanent superficial water. But, where terrain allows, the accumulation of water forms semi-temporary lakes (locally known as aguadas). These aguadas are the only source of water for the region’s fauna and human communities during the dry season. Over the last 50 years Calakmul experienced significant reduction in annual rainfall, unbalancing water prevalence over time in aguadas and threatening aquatic habitat availability. This situation has been particularly harsh the past 5 years as a prolonged drought period is haunting the region by slowly shutting down available water sources. Imagine aguadas as the petrol and service stations of the forest. With less available places to stop and refuel, wildlife (especially mammals and herpetofauna) is starting to travel further for water and food, concentrating in the few places that still have water. How would you react if 80% of the available petrol and service stations in your country were no longer available for you to use?

Although general knowledge on the population biology of the Morelet’s crocodile (Crocodylus moreletii) has been rapidly increasing over the last decades, only rudimentary information is currently available about populations from the Mayan Jungles. As my passion for crocodiles and interest in conducting further research in the Calakmul region grew a PhD project started bubbling in my mind, launching me towards the opportunity of a lifetime. Through an ICASE partnership between Operation Wallacea and University of Salford I was able to accept the PhD challenge and venture forward through the Mayan forests of Calakmul tackling questions such as; How water availability shift through time in the region? How general structure of waterbodies change over time? Where is it more likely to find crocodiles? How many crocodiles exist in the region? How is their population structured? Is this a pure lineage of crocodiles or admixed (i.e. hybrids) like the rest of the Yucatan Peninsula?

I am now two and half years into my PhD, and I have lived and experience many things. I spent significant part of it exploring the region, engaging with local communities and learning from them. I walked through excavated and unexcavated ruin sites. I have ventured through murky waters chasing crocodiles. I befriended and changed the minds of several local guides, like Señor Alberto (see below) about crocodiles. I came face to face with a puma and won a staring competition with him. This and much more, but most important of all collecting data that will be essential for management actions towards the conservation of C. moreletii populations in aguadas, generally serving as an umbrella species for the biodiversity that occurs in them.

For more information on the waterbodies of Calakmul you can access the database we created for the region, that allows you to see the aguadas in Google Earth (link)! If you wish to see more of my adventures in the region you can see the photos and videos, I regularly share on Social Media platforms (Twitter: @baraoNobrega | Instagram: @baraonobrega | Facebook: @baraonobrega). Here are some examples (Señor Alberto; Crocodile nest; Aguada Habitat; Ruins; Tapir tracks). Have a look at it and see Calakmul through my eyes! Maybe it will give you the final incentive for you to come and join our Mexico expedition! See you in Calakmul! ? 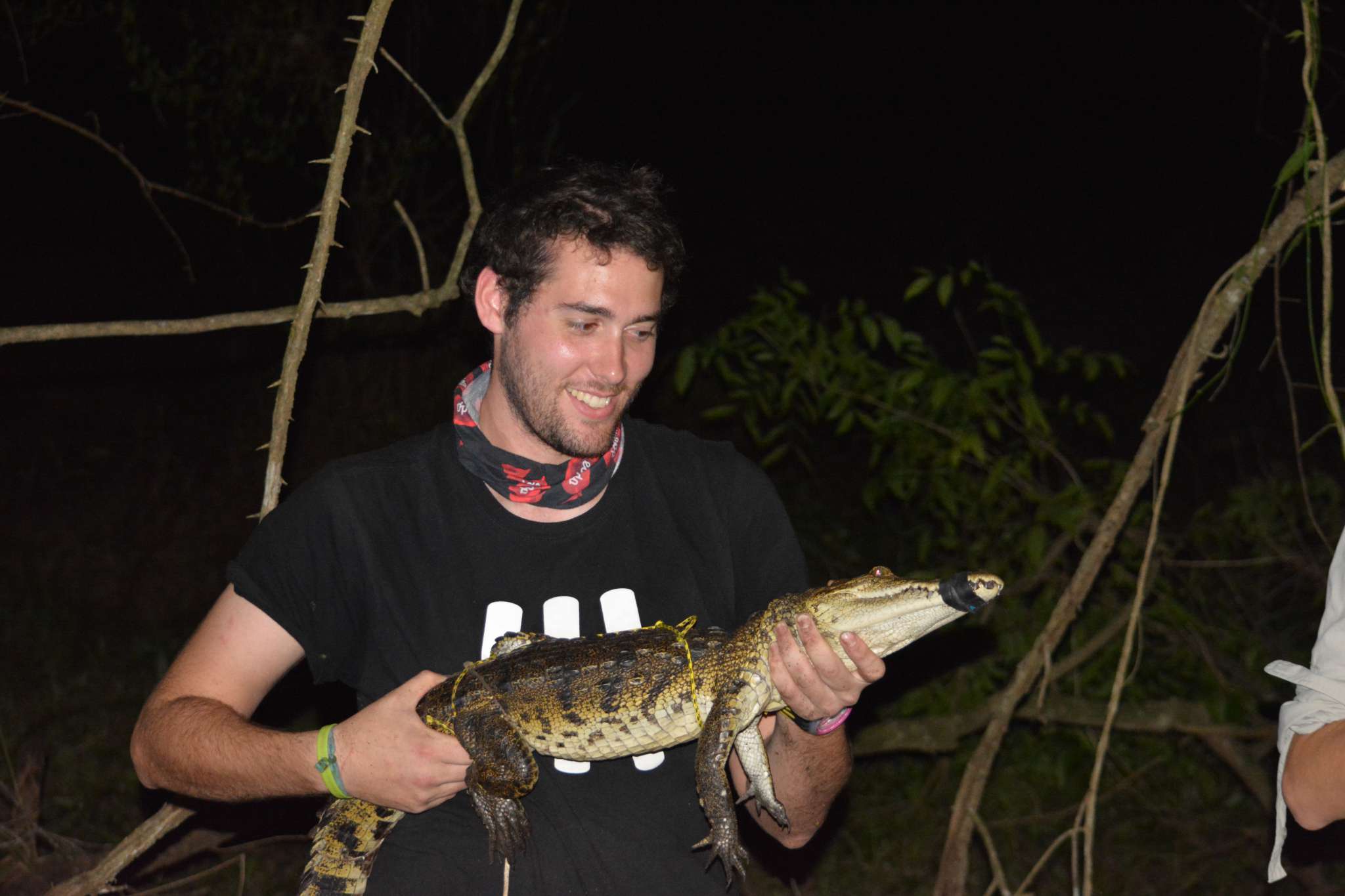