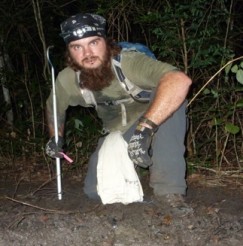 Tim is a herpetologist and evolutionary biologist at the University of Mississippi. Tim’s main interests are in biogeography, community assembly patterns in snakes and evolution and systematics of venomous reptiles. Tim’s Ph.D. focuses on understanding the historic processes that shape and dictate the assembly of communities, as well as how the ecology of co-existing members affects species’ distribution. Tim is comparing assembly processes in several snake communities around the globe, and investigating how snakes’ gut bacteria have influenced snake evolution. Tim is using the snake community in Calakmul as one of his focal communities for his Ph.D. research.