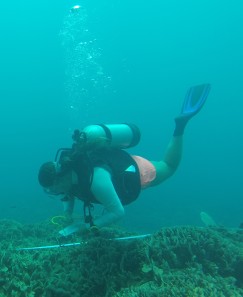 Natalie is studying her PhD at the University of South Wales focusing on conserving Caribbean reef ecosystems, through re-establishing populations of the long-spined sea urchin (Diadema antillarum), in areas where post mortality densities are extremely low. A comprehensive survey of the Caribbean in 2006 found that since 1997 live, scleractinian coral had declined across the region by 80% and we are now seeing a phase shift from stony coral to macroalgal dominance. It is widely believed that this dramatic change is largely due to a loss of herbivorous function, mainly attributed to the devastating decline of D. antillarum in the early 80s. Post mortality densities of D. antillarum at Banco Capiro are unprecedented throughout the Caribbean. Could this be due to some kind of genetic resistance which, is allowing the population to thrive at this location? She is currently focussing on genetically sequencing populations of D. antillarum at Utila and Banco Capiro to discover if there are any differences, genetically, between the geographical populations. Further work will concentrate on the husbandry and translocation of Diadema antillarum in order to hopefully restore the population densities and in turn ecosystem function of this keystone, Caribbean herbivore.