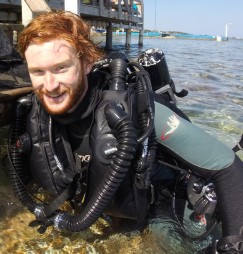 Jack is studying for his PhD at Oxford, working on the corals of the twilight zone. These regions start at 30m and end with the last photosynthetic coral, sometimes as deep as 150m. They are poorly sampled as they lie beyond the reaches of recreational SCUBA and are often too shallow for submersibles. Jack is using tec diving to visit the twilight zone and test the deep reef refugia hypothesis. If a shallow reef is impacted, could a deeper reef act as a natural seed bank? This work considers topics ranging from community ecology to physiology and population dynamics.