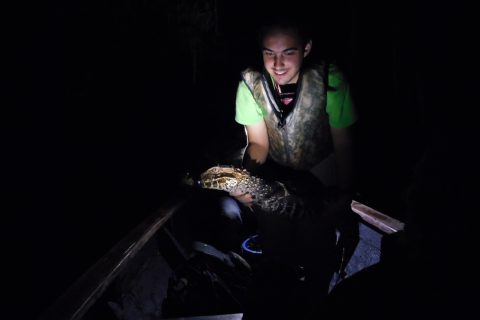 Winners and losers in a changing environment: A functional approach to the ecology and conservation of crocodilian communities.

Ongoing at University of Porto

I am interested in studying the ecology of the dwarf caiman (Paleosuchus spp). This poorly studied genus of neotropical crocodilian (of which there are only two species) lives a semi-terrestrial lifestyle (which is unlike most other extant crocodilians and only comparable to the African dwarf crocodile, Osteolaemus spp.) and is often found in small forest streams and palm swamps as opposed to the bigger Amazonian rivers.

The fact that most of its range overlaps with multiple other species of caiman, along with the inaccessibility of its habitat, its cryptic nature and the comparably lower densities in which it occurs, has meant that these species have often been neglected. Nonetheless, recent studies have shown that these animals may adopt very different ecological strategies to those of “typical” extant crocodilians (e.g. increased time spent on land, thermoconforming, etc).

However, an in-depth study of the ecology of this genus is needed to better describe such strategies. This is what I intend to achieve with my PhD. I will resort to recent techniques (Infra-red thermal imaging, remote temperature and GPS tracking, stable isotope analysis) along with intensive fieldwork to describe the thermal strategy, habitat preference, movement patterns and dietary preferences/ trophic level of Paleosuchus. Additionally, I intent to investigate the degree of niche overlap with that of other syntopic crocodilians and how the presence of complex crocodilian communities (with more than two species) often seen in the Amazon rainforest, have shaped the ecology of Palesocuhus. I also intend to determine the extent to which these animals are in direct competition (space and food) with humans.

Finally, an in-depth functional understanding of the ecology of these animals will, in the final years of the project, allow the use of mechanistic models to predict how these species may react to different scenarios of disturbance (e.g. habitat degradation, climate change, etc). These will hopefully provide important insights for future management and conservation plans for these species and/or for the complex crocodilian communities of Amazonia.

This PhD is undertaken at CIBIO Research Centre (University of Porto, Portugal) under the supervision of Dr Miguel A. Carretero (CIBIO) and co-supervised by Prof. Ronis da Silveira (Universidade Federal do Amazonas, Brazil). The project is supported by Operation Wallacea, FundAmazonia and Fundação para a Ciência e Tecnologia.