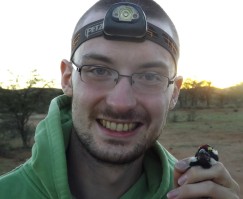 Darren is studying comparative patterns of divergence in an ecological guild of small passerine birds and the role of competition as a driver of speciation. He is based at Trinity College Dublin. The processes involved in speciation remain highly controversial areas of evolutionary research. Particularly controversial is whether competition plays a major role in speciation. For his PhD Darren is researching the fundamental evolutionary mechanisms that underlie speciation. In particular, he is interested in the role that competition within ecological guilds has in driving and maintaining divergence in populations. Darren is focusing on a guild of small passerine birds on the islands to the south-east of mainland Sulawesi, in the heart of the Wallacea region. The species in this guild (white-eyes, sunbirds and flowerpeckers) have similar ecological requirements. Different members of the study guild are found on different islands, changing the competitive dynamic between these species, potentially driving the speciation process. In order to build a complete picture of changes within the study guild, island populations will be investigated for divergence from mainland populations in; 1) genetics, 2) morphology, 3) song and 4) behaviour and feeding ecology. Using behavioural and ecological data will determine the role that inter- and intra-specific competition have played in this divergence and identify any other selection pressures involved. This study will provide important insights into guild dynamics and evolutionary mechanisms. These insights will allow ecologists to more effectively assess the biodiversity (and therefore conservation status) of geographic and ecological islands, by considering the effect of guild structure.