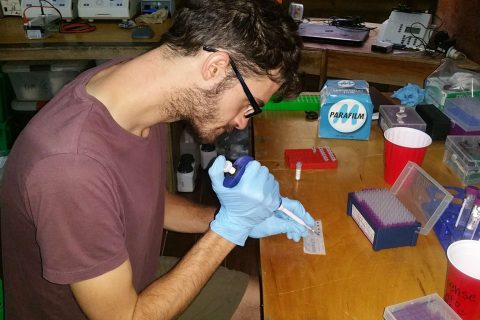 I am currently undertaking my PhD research focussing on the molecular ecology and epidemiology of chytrid fungus in Cusuco National Park. Due to the overlapping ranges of several critically endangered and endemic species, CNP has been identified as one of the top 25 areas in the world for amphibian biodiversity. However amphibian species of CNP are under threat from an emerging infectious disease Barachochytrium dendrobatidis (Bd), otherwise known as chytrid fungus, which interrupts the physiological functions of the skin eventually causing death. Alongside deforestation and climate change, Bd has been identified as one of the major contributing factors in global amphibian population declines, affecting 30-40% of amphibian species worldwide.

Through utilising cutting-edge genomic techniques and addressing questions related to host and pathogen genetics, I hope my research can offer valuable insights into the genetic and ecological ramifications of Bd in Mesoamerican cloud forest and contribute to the conservation of the critically endangered amphibian taxa of Cusuco.