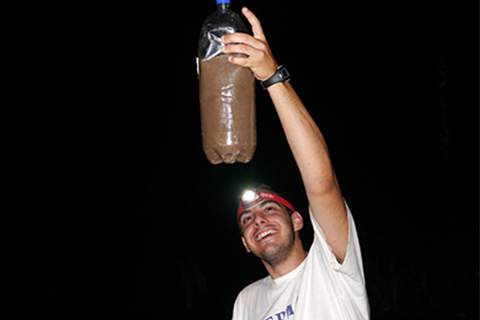 Frederico was born in Porto. He spent his childhood watching nature channels and discovered his ever-growing passion for reptiles (particularly crocodiles) at a tender age. Recently graduated from Zoology MSci Degree in the University of Glasgow, he participated on several Opwall expeditions during his university career having done his thesis with Opwall on the caiman niche separation in the Peruvian Amazon.

Since he first attended an Opwall presentation (and booked his first expedition), he’s managed to fulfil (at least) two of his biggest childhood dreams: visiting the Amazon rainforest and working with crocodilians! Since 2012 he has been with Opwall to Peru (three times – more to come), to Honduras and to Croatia. In addition to that, all through his academic years he was Opwall’s group leader at the University of Glasgow, helping Opwall to recruit volunteers and spreading the project’s message.

Frederico is now Opwall Iberia’s new recruit where his job entails visiting schools to share some his stories and the science behind his past expeditions, hoping to inspire the same passion for conservation and exploration in a new generation of scientists and explorers.

In the Summer field season, you can always expect to find him in one of our expeditions, chasing reptiles and amphibians (and occasionally birds as well), as one of our keen herpetologists.